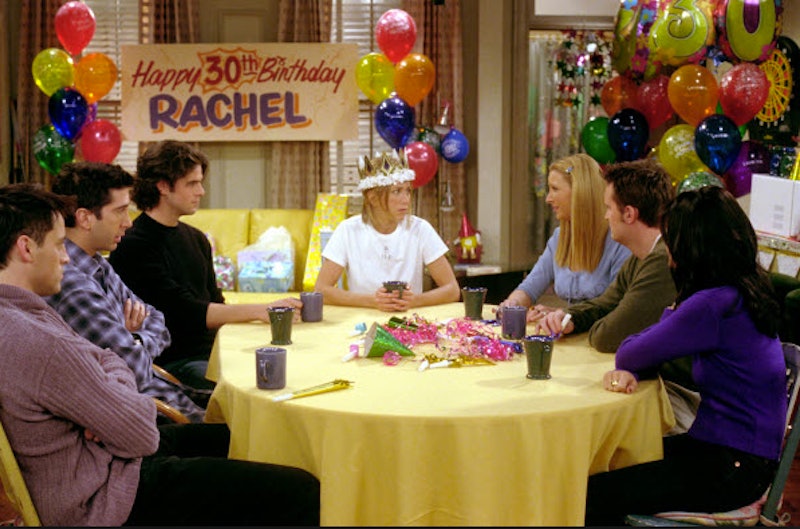 Full disclosure: I'm in the final year of my 20s. Yes, it's my year before 30, and although I tell myself all the time, "It's OK—Amy Poehler is fabulous and 43," I'm quietly freaking out. It's a rite of passage, isn't it? To freak about about your Dirty Thirty? We're conditioned to see 30 as this looming deadline. Like everything up until then was instruction for the big exam. But no one understands the full magnitude of that deadline entirely—until you're 29 and you realize you have to start CRAMMING. Because, by golly, 30 sound big and mature and old and how is it that you're nearly there, weren't you 19 like, two years ago?

My friends who are already in their 30s or out the other side of their 30s all say the same thing. Forget your 20s. Your 30s are the best years of your life. BUT HOW CAN THAT BE? In my early 20s, I never got hung over, I could eat as much McDonald's as I liked without getting fat or feeling terrible, and I was basically just having a fun time all the time. Now I have responsibilities and bills and deadlines. How can 30 be better, HOW? Obviously I'm being a touch hysterical and maybe a little irrational, but of all the people who sing the praises of their 30s, I can't think of one of them who wasn't completely freaking out about actually turning 30. I guess it's like going for a bikini wax: At first you're terrified, wondering why you signed up for this madness at all, but after all the hairs are torn out, it doesn't seem so bad after all, and you have a neat little garden to show for it. So here's to everyone that's fumbling blindly towards 30. Here are 8 (possibly crazy) things you might be thinking:

1. OH MY GOD THIS THE LAST YEAR OF MY AGE STARTING WITH 2

It doesn't make any sense, but there's this strong attachment we all feel to our 20s. It's like going from 9 to 10, single digits to double—It just feels big. Going from teens to 20s is totally different; When you're a teenager, you're racing to be older. You can't wait to enter your 20s. But once you're old enough to realize how cool being young is (which, as it turns out, usually happens right around the time you're facing another decade change), you start to want to push on the breaks.

The truly terrified among us will see the void between ourselves and 20 widening. YOU'RE OLD. IT'S HAPPENING. YOU'RE AN OLD PERSON. If this doesn't scare you, think about it like this: try to remember how old 30 seemed to you when you were 18. Teenagers think you're a geriatric, and they will always think of you this way. For the rest of your life, you're stuck as Kim Kardashian in the episode of KUWTK where she thinks Kylie Jenner's Tumblr is cool and Kylie Jenner thinks Kim is an old moron.

3. MY CAREER IS NOT AS FAR ALONG AS I WANT IT TO BE

I just keep saying to myself, "Beyoncé is 33. Beyoncé is Beyoncé You are not Beyoncé How do you expect to become Beyoncé in the next 3 years? IT'S TOO LATE. You screwed it all up. Your career is only just beginning and if you do the Beyoncé math, you're going to be 60 before you're Beyoncé because Beyoncé has been training for this shit ALL HER DAMN LIFE."

In a relationship or not, you'll start worrying about why you're not married, for no reason at all. You probably don't even want to get married right now but that's not the point. The point is that you could be married, and you are not married.

5. MY BIOLOGICAL CLOCK IS TICKING

Dudes don't have to think about this. But if you're a woman, no matter how empowered/career oriented/independent you are, if you want to have kids "some day", now is the time you really start worrying that your ovaries are going to dry up before you get a chance to. It's SCIENCE: The older you get, the less eggs you produce, the more things start to go wrong and the less chance you have of conceiving. Bless all the women who don't want to have kids because this one is a non-issue and it's giving the rest of us a stress migraine. Again, even if you don't want a kid RIGHT NOW, you'll start freaking out about ever having one. If you're my mother, you will sit next to your daughter whispering "tick, tick, tick" and when she asks you what that sound is you'll reply "That's the sound of your biological clock ticking."

The problem with 30 is you still feel like a child, but you also feel a bit like an adult. It's a big stew of kid stuff and grown-up stuff spinning around inside you. You don't feel like a girl any more, but you certainly don't feel like an entirely full grown woman. It's your Britney moment, is what I'm saying. You still think penis jokes are funny but you also know how to change a tire and have to pay bills. Your late 20s are weird sort of purgatory between childhood and complete adulthood, and you'll probably be wondering when exactly it is you cross the line into "not cute to shot gun beers anymore" territory.

And even when you do cross a clear line into adulthood, how do you even be a proper adult? NO ONE TOLD YOU HOW TO DO IT SO HOW ARE YOU SUPPOSED TO KNOW?

Eventually, you'll start figuring it out. You'll want to buy nicer knives because at 30, you really shouldn't be cutting bread with a butter knife. Maybe you'll get some steak knives while you're at it, and maybe even some of those fork-spoon hybrid thingys for dessert. When everything feels chaotic and scary and disjointed, you'll pick at the small things and eventually, you'll realize that it doesn't matter if you're 30 and find farting hilarious. The "getting it together" stuff is mostly superficial. Pay your rent on time; Don't cook directly over the blue flame; Keep nice coffee in the house. As a very wise lady (my mom) once told me, "The big secret about being an adult is a solid exterior. Everyone is still 19 on the inside."