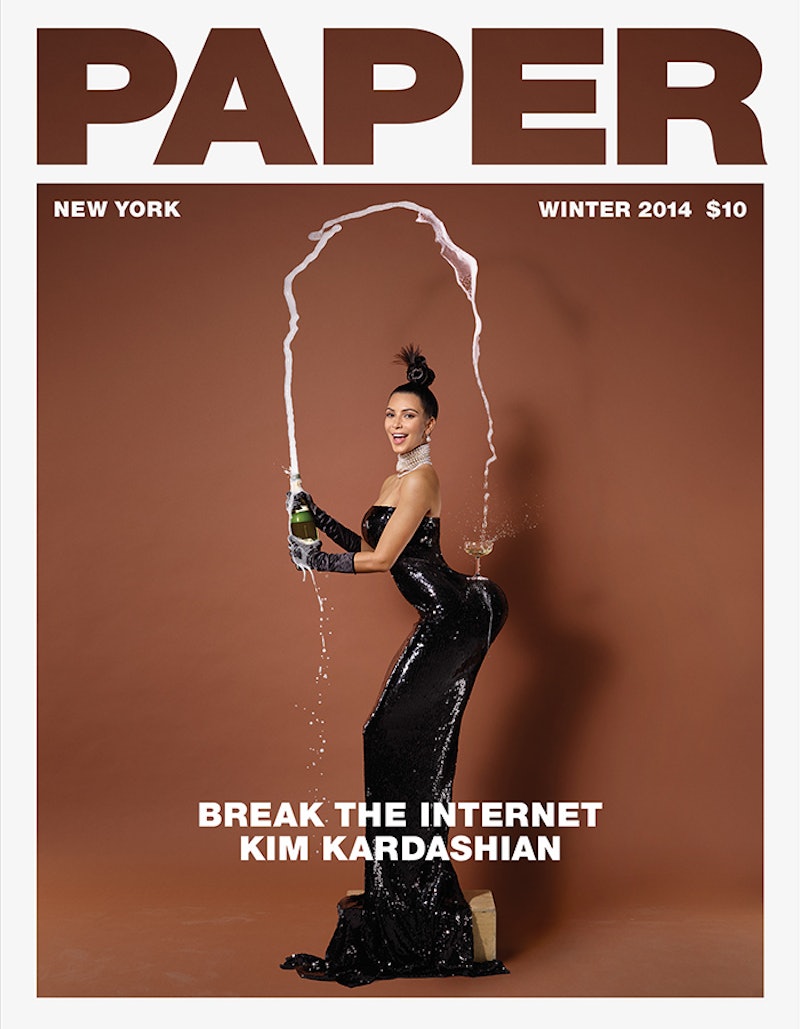 I feel like we've all been looking at Paper Magazine's sensationalized photos of Kim Kardashian one way: with a strong rear view. Even I am guilty of making jokes about her having to go see a doctor because she's got a giant crack in her ass. But this morning I've been alterted to the the more sinister implications of the imagery, because there are some serious and troubling racial issues at play. And those issues are of racial mockery and fetishization. For the uninitiated, those things unequivocally equal racism.

Having just read Blue Telusma's article on the racial joke Kim Kardashian's ass is complicit in, I think it's important to note that the overwhelming heap of think pieces about Kim's sexuality and her "self-awareness" are complete bollocks. I was quick to brush the imagery off as slavishly attention-seeking by both Kim and Paper Magazine, so my reaction to the images themselves was also "bollocks." As it turns out, there's a symbiotic relationship between that ass and photographer Jean-Paul Goude's intentions that goes beyond an attempt to "break the Internet". If Kim were as "self-aware" as she's been credited as being, she'd know the sexuality she's claimed in the photos has nothing to do with her own autonomy and everything to do with a deeply institutionalized, culturally white fetishization of the "freakish" black body. And yes, I am aware that Kim is not black (and, in fact, never considered race at all until giving birth to a black baby) but our fascination and so-called "celebration" of big asses definitely is tied to our cultural view of black women's bodies; our collective relationship with Kim's specific ass is just tapping into that. Her not being black really doesn't undermine that.

In her article, Telusma brings up Sarah “Saartjie” Baartman, a black woman who lived between 1790 and 1815, and who was exhibitied as a freak show attraction in 19th Century Europe because of her large, "shelf-like" behind. The image of "Saartjie" has been called upon many times in the past year to highlight white co-opting of the black female body, and the way in which white culture mocks and fetishizes blackness. Telusma calls this "reincarnation" of Saartjie, "imagery that is steeped in centuries of racism, oppression and misogyny." And she's right. Telusma writes, "Saartjie was a woman whose large buttocks brought her questionable fame and caused her to spend much of her life being poked and prodded as a sexual object in a freak show. Sound familiar?"

Telusma postulates that “Kim probably has no clue about the cultural and historic significance of what she’s done,” but even if that's true, it doesn't let her off the hook. As my editor, Jessica Blankenship, put it this morning: “A woman being complicit in her objectification doesn’t make it less egregious or absolve her of responsibility, and to think otherwise ignores the deeply complex dynamics between that woman and herself within the context of how society has made her view her own worth and her own body." I tend to agree. Kim SHOULD have known. Or at least, Kim's machine should have known. Someone, somewhere in the Kim Kardashian publicity empire, should have done some research. As I'm writing this, I'm sickened to think that maybe someone was aware of the appropriation, but went ahead with the shoot anyway. Or maybe the controversial underpinnings of the images was yet another layer in their attempt to "break the internet"; Here's yet another post about that cover, right? That would be well within the gamut of what we've come to expect from Kim, someone who is famous for being horrible and selfish (oh, and dat ass, let's not forget).

Even if you reject the Saartjie likeness (if you can explain to me how you would do this, I'm all ears, because I can't really see a way around it), there's some incredibly troubling re-hashing of Jean-Paul Goude's back catalog of racial imagery. For instance, this image of a black model against a blue backdrop, popping champagne into a glass balanced on her bottom:

This photo is from a book called Jungle Fever. Yes, you read that correctly. Kim is essentially re-enacting a photo that actively and decisively acknowledges the white pastime of fetishizing the black female body. It's overt. There's no way around it. Telusma notes an interview with Goude from People magazine in 1979 about his then-relationship with model and singer Jones. In it, he says he is captivated by “ethnic minorities—black girls, PRs. I had jungle fever.” He's also responsible for photos of Jones, his lover, caged and baring her teeth, her blackness reduced and objectified to his subservient wet dream.

When you put it all together this way, the evidence is incriminating Jean-Paul Goude is a photographer who doesn't respect the humanity and autonomy of black women. Blackness is his fantasy, and he treats it as such in his body of work. The reincarnation of Kim as his original Jungle Fever subject isn't envelope pushing, it's reductive. It reduces Kim, it reduces Paper Magazine, and it reduces us culturally as we celebrate and gossip about imagery that mimics a historical castration. Telusma says, "The parallels are so literal and un-nuanced you’d have to willfully ignore what’s right in front of your face. This idea that 'black equals erotic' is fetishism in its purest form; it mocks 'otherness' while pretending to celebrate it and defines human beings by their genitals instead of seeing them as whole people." Shame on us for allowing this blatant racial exploitation to slip, unrecognized, right under our noses.