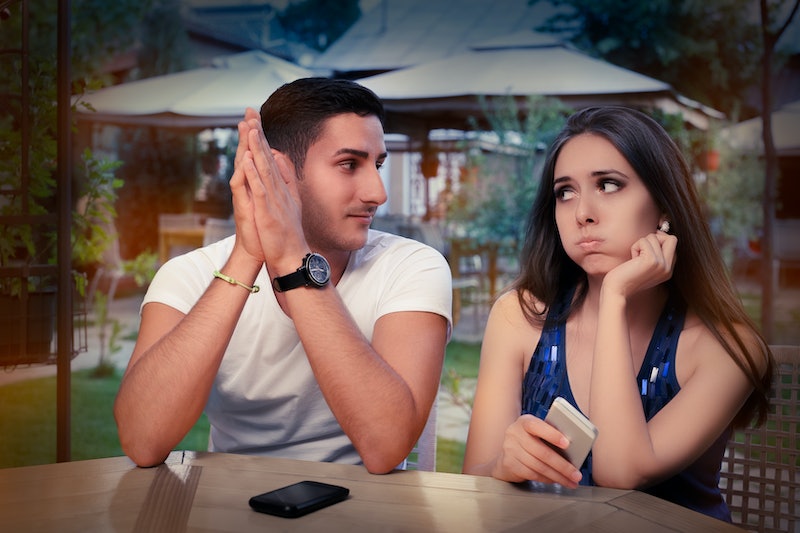 We've all had some cringeworthy dates in our time, and with the rise of online dating, I think we can all agree that's not going to change anytime soon. But have you ever had a date so awkward that a woman live-tweeted it? Yeah, me neither (to my knowledge). That's exactly what happened on Tuesday of this week when entrepreneur/physician/hedge-fund investor Carrie Mantha overheard the results of a terrible Tinder match at a bar — one that was so bad that she felt the need to transcribe it for the Internet. According to BuzzFeed, she took to Twitter because "it was the kind of thing [her] friends would find amusing had they been sitting there with [her]." Her friends, and also apparently thousands of other people on the Internet. The match's painful awkwardness wasn't the result of the couple having no chemistry, or one of them just not feeling it, or any other normal reason for a bad date. It was all thanks to the man, a "40-something trust fund baby" whose complete lack of tact appalled not just Mantha, but everyone around the couple as well. You'll see what I'm talking about in a second. Fair warning: it's about to get really awkward really fast.It all started when Mantha noticed the couple next to her.

The man quickly raised the stakes for terrible conversation.

Oh hey, apparently he has absolutely no tact.

And he casually dropped in the fact that he might have a child??

Other people were paying close attention to this train wreck as well, especially once he started in on politics.

And by politics I mean "spouting uninformed, politically incorrect opinions."

Astoundingly, the date finally ended without any drinks being thrown in the guy's face. But never fear, there could be a chance for a sequel!

These were just the highlights — for the whole, excruciatingly awkward story, head over to Carrie Mantha's Twitter account. I don't know about you guys, but I still can't shake my secondhand embarrassment.