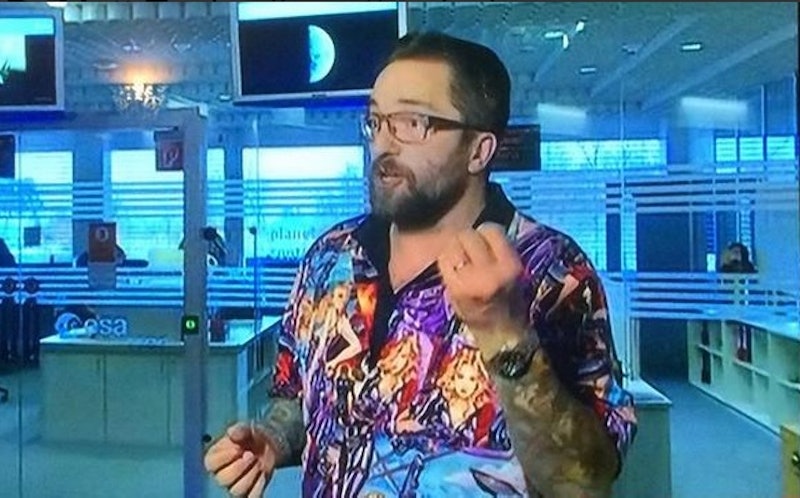 Thanks to the glory that is the Internet, mere mortals sitting at home had the opportunity to watch the Philae probe landing on a comet through the European Space Agency's live-stream on Wednesday — as well as witness one Philae researcher's sexist shirt, which depicted women in lingerie.

It was a historic moment in human ingenuity and ability — a spacecraft landing on a comet for the first time, ever, which could answer questions about the history of our solar system and whether there were other life forms out there — unceremoniously deflated by one Matt Taylor's lack of foresight (and taste — besides being offensive, the shirt is also butt-ugly).

His choice of outfit provoked unhappy responses, on both professional and personal grounds. Taylor and his shirt showed up on the feed and promotional Twitter before promptly disappearing (he quickly changed into a more appropriate ESA shirt) in response to outrage from the science community.

Given the real problem of women facing a myriad of challenges in the STEM fields and the ongoing discussion of overcoming them, Taylor's attire points to the pervasive male-dominated culture — whether consciously or subconsciously — in science and engineering fields that often make women feel un-welcomed or un-included.

In an video interview from ESA posted on the Daily Mail, Taylor said about the Rosetta mission:

The Rosetta mission's is the sexiest mission there’s ever been. She’s sexy, but I never said she was easy.

Now, my bets are that Taylor isn't what you'd call an misogynist; he could be really cool and chill and funny and respectful towards the women in his life — I don't know. And although I believe in equal rights and mutual respect, I also believe that sometimes things are blown way out of proportion, especially when it comes to the issue of gender equality.

But Taylor easily assigning a gender to a momentous space mission, and his referring to it as "sexy but not easy" makes me cringe — firstly, because it's crass (there's definitely a better way to explain how difficult this mission has been, and the pride you have in your work), and secondly, the whole "sexy female that's hard-to-get" image is rooted in sexism and implies that a woman's worth stems from her unattainability. Casual sexism, I believe it's called.

And the question of sexism aside, I also have to point out how aesthetically displeasing Taylor's shirt was — the lingerie-clad women were all over the place (uh?), set against a light blue and purple background (ugly), peppered with weird orange explosions (no). I mean, if we learned anything at all today, it's that this man has a very peculiar fashion sense.

Most of all, the now-infamous shirt should not overshadow the ESA's achievement. But it does raise the question of whether those in the STEM fields are aware of gender issues — or any kind of diversity issues, for that matter. While the discussion of Taylor's attire is a change from discussing the skirt lengths of female researchers, it all goes back to the same topic of sexualizing and objectifying the female body.