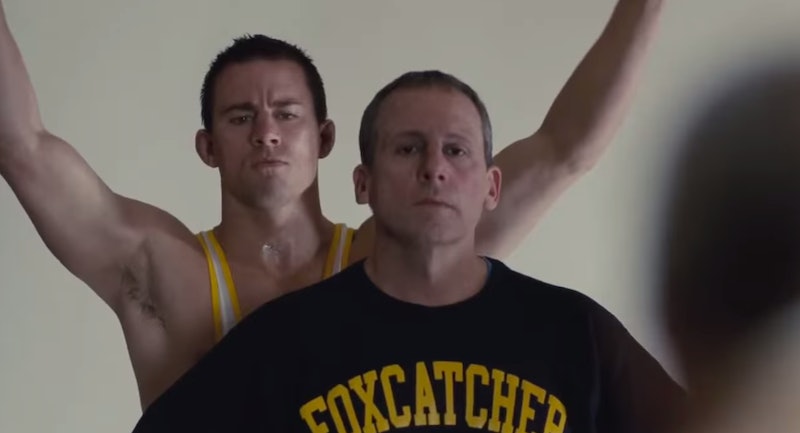 With the release of Steve Carrell and Channing Tatum's new project Foxcatcher quickly approaching, anticipation is at an all-time high for the film. It's a serious drama, quite different from any of Carrell or Tatum's recent projects (both of which were comedies — Alexander and the Terrible, Horrible, No Good, Very Bad Day and 22 Jump Street, respectively) but, that's not the only unique thing about it. Foxcatcher , which follows the story surrounding Olympic Wrestling Champion, Mark Schultz, is actually based on a true story, and is even titled a biographical drama film as it's genre.

So, what's the story behind the film? (Consider this a spoiler alert, guys): Sadly, as the film's dramatic tone suggests, it's a majorly tragic one. Back in the '80s, Mark Schultz (portrayed by Channing Tatum in the film) and his brother, David Schultz (portrayed by Mark Ruffalo) were both rising stars with their wrestling careers: Both won gold medals at a large amount of competitions including the Olympics, and both were highly regarded athletes. In the late '80s and early '90s, David began a friendship with the du Pont Chemical fortune (valued at over $250 million), John Eleuthère du Pont, and eventually even ended up moving into du Pont's property with his wife and brother when du Pont began sponsoring both David and Mark's careers.

Du Pont, however, is said to have begun experiencing severe mental distress in the early to mid-'90s, ranging from paranoia to paranoid-schizophrenia — and in 1996, he shot and killed David Schultz on his property after experiencing deteriorating delusions. Police, at the time, weren't able to establish a motive, but, due to du Pont's mental state, it's thought that he was angered about David considering taking a position as a wrestling coach at Stanford University. Though he pleaded insanity during the trial, a judge found du Pont guilty of murder in the third degree and sentenced him to prison, where he eventually passed away in 2010.

The movie, according to preliminary reviews, seems to follow the real-life events that transpired — after all, it is heavily based on Mark Schultz' autobiography. However, like most dramatic retellings, there are some differences, namely the fact that the David of the film seems more reluctant to associate with du Pont than in real life. It's worth noting, though, that the film is meant to be told more from Mark's perspective than David's, so that could be a stylistic choice.

In any case, the story behind this film is very, very real — which I'm sure will only make its emotional impact all the stronger when it hits theaters on Nov .14.

If you haven't seen it yet, check the trailer for Foxcatcher below: