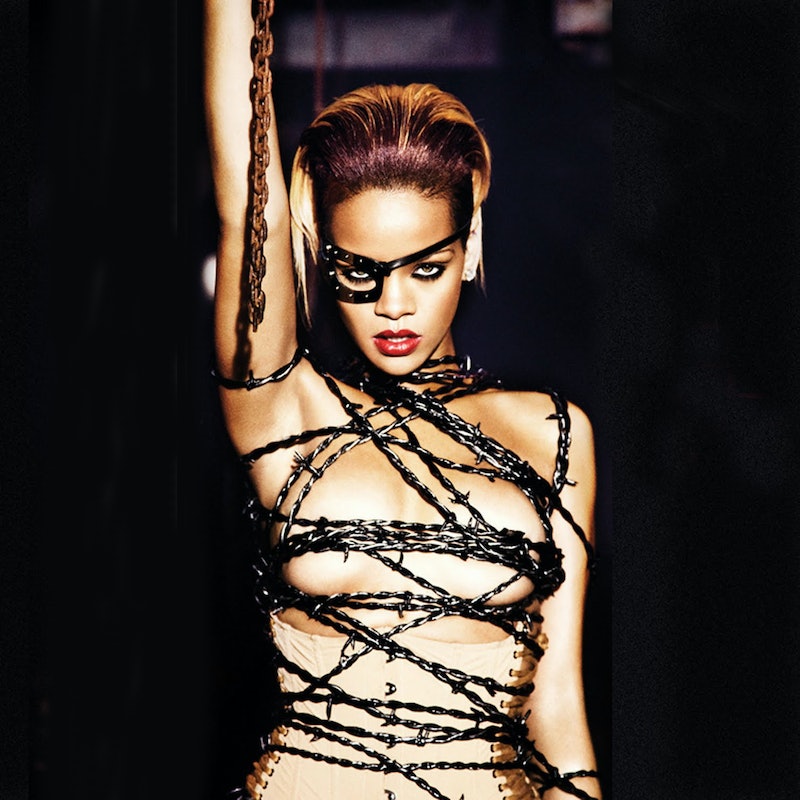 Thursday marks the fifth anniversary of Rihanna's Rated R, the 26-year-old pop superstar's most critically acclaimed and, arguably, most personal album to date. Unlike her previous efforts, Rihanna co-wrote the majority of the songs on Rated R — songs that deal with love, sex, and perhaps most notably, toxic relationships. Surprisingly, Rihanna began working on Rated R just two months after she was brutally beaten by her then-boyfriend, Chris Brown, on February 8, 2009. According to court documents, Rihanna and Brown argued in his car about a text message he had received from another woman before he became violent. Brown pled guilty to felony assault and was sentenced to five years probation for his crime. Rihanna, who understandably didn't speak publicly about the terrifying incident for several months, may have looked to music to help her heal.

Though producer Chuck Harmony astutely observed shortly before Rated R's release that people were going to assume any music Rihanna put out at that time was about Brown, there are definitely legitimate reasons to believe that the now 25-year-old singer inspired some of the album's lyrics — even if Rihanna didn't always write them herself. While Rihanna told MTV in a November 2009 interview that not all of Rated R 's songs were about Brown, she also said that, as a whole, the album is an "expression" of all the feelings she had experienced since that horrible day in February.

On this, Rated R's fifth anniversary, let's take a look back at the powerful lyrics that seem to point to Rihanna's troubled relationship with Brown.

"Stupid In Love" is about Rihanna's relationship with a liar and a cheater. Her friends tried to warn her that this guy was no good, but she just wouldn't listen. Hmm. Interestingly, there's a car reference at the beginning of the song:

I left the engine running

I just came to see

What you would do if I

Gave you a chance

So I made it

And she was right

Dark and cinematic, "Russian Roulette" finds Rihanna playing the deadly game of, well, Russian roulette — which could easily be a metaphor for her entire relationship with Brown. She's terrified, knowing that the next pull of the trigger could be her last — but for some reason, she keeps playing. She's no longer able to see the "value" of her life:

Take a breath, take it deep

"Calm yourself," he says to me

If you play, you play for keeps

Take the gun and count to three

No time to think, my turn to go

As my life flashes before my eyes

I'm wondering will I ever see another sunrise?

So many won't get the chance to say goodbye

But it's too late to think of the value of my life...

"Fire Bomb" is, once again, about a relationship that Rihanna knows is headed for disaster, destined to end in a fiery car crash. There's mention of the police and an ambulance being called near the end:

Where I'm going, I don't need my bakes

Can't wait to see your face when your front windows break

And I come crashing through

The lovers need to clear the road, oh oh

'Cause this thing is ready to blow, oh oh

Then you, then you'll know where I'm coming from

As we were burning, the world called the police

You can call me crazy

'cause I believe the only move for me and you is to go out blazing...

In "Photographs," Rihanna reminisces about a past relationship and questions where it all went wrong. She's still in love with this man — even though he broke her heart:

'Bout this boy I know so well

Back in the day was cool and all

Thought he was the one for me

Others boys, I could not see

And look what happened to our love

I know you're a better man when I was your girl

This land is a better land when you're in my world

Today will be better babe

"G4L" is a violent revenge fantasy set to music. In the song, Rihanna sings about being a part of a gang of female vigilantes who travel the world making men pay the ultimate price for their crimes. Damn. Obviously, I don't condone these lyrics, but there's no denying their power — especially when you consider Rihanna's history with domestic violence:

I lick the gun when I'm done

'Cause I know that revenge is sweet

This is a gang

Tell me what you need, oh

Playin' with fire finna get you wet

How that feel down there on your knees?

We driving by with them headlights off

We know where you stay

Know what you did

We don't play that shit

Come on, we ain't done yet

Got a lot to handle

We ain't take over the world yet

Better yet, a navy

Guns in the air

Can't hurt us again when you come around here...

The lyrics to "Cold Case Love" speak for themselves, really:

Dark and I'm burning a rose

I'm torn apart and you know

What you did to me was a crime

And I let you reach me one more time

Your love was breaking the law

But I needed a witness

So, pick me up when it's over

It don't make any difference

Will it ever be solved?

Or am I taking the fall?

Truth was there all along

Tell me, how did we miss it?

We opened up a cold case love

And it got the best of us

Are all that's left at the scene of a crime

More like this
Rihanna Skipped The Met Gala For Good Reason — But She Still Stole The Show
By Alyssa Lapid
Spice Girls’ Net Worth: The Richest Member Is Wealthier Than The Rest Combined
By Hugh McIntyre
Rihanna Wore A Sparkling Lingerie Look For Date Night With A$AP Rocky
By Allie Fasanella
Rihanna Wore Crochet Bra Tops In A$AP Rocky's New Music Video
By Dominique Norman and Kelsey Stiegman
Get Even More From Bustle — Sign Up For The Newsletter