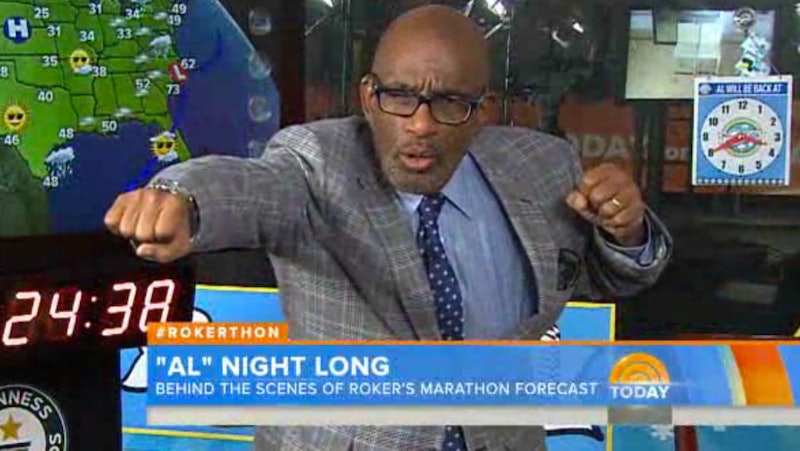 As far as on-air newscaster flubs go, this isn't on the level of turning Mike Huckabee's name into profanity — or beginning your first news segment ever with profanity, for that matter — but it's still pretty embarrassing in that "I cannot stop laughing" sort of way. During his recent attempt to continuously report the weather for 34 hours straight in a segment called Rokerthon, Today show meteorologist Al Roker forgot to turn off his microphone during one of his allowed bathroom breaks during the continuously streaming segment — thus, broadcasting his trip to the restroom to anyone who was watching Rokerthon at the moment. ICYMI, Twitter had a field day with it.

Sadly, there doesn't seem to be any footage of this major flub — though this is the Internet, so I'm sure that's only a matter of time — but, ever the good sport, Roker did admit to his mistake during a behind-the-scenes look at the making of his marathon weathercast on Today Thursday morning.

"On my break, I went to heed nature's call, and uh...we forgot that my mic was on," Roker explained, in an amused — though slightly embarrassed, obviously — tone. "We gave new meaning to the phrase 'live-stream.'"

I have to hand it to him: Broadcasting your bathroom break to millions of viewers is a pretty yikes-worthy thing to do, but, "live-stream"? OK, that was a great joke.

More like this
Jake Daniels Just Became The UK’s First Active Football Player To Come Out As Gay Since 1990
By Sam Ramsden
What Is Jeanie Buss' Net Worth? The Lakers President Is Uber Rich
By Hugh McIntyre
Twitter Is In Utter Meltdown After 'Derry Girls’ “Poignant” Finale
By Sam Ramsden
The WAGatha Christie WhatsApp Messages Have Been Released — & They're Wild
By Sam Ramsden
Get Even More From Bustle — Sign Up For The Newsletter