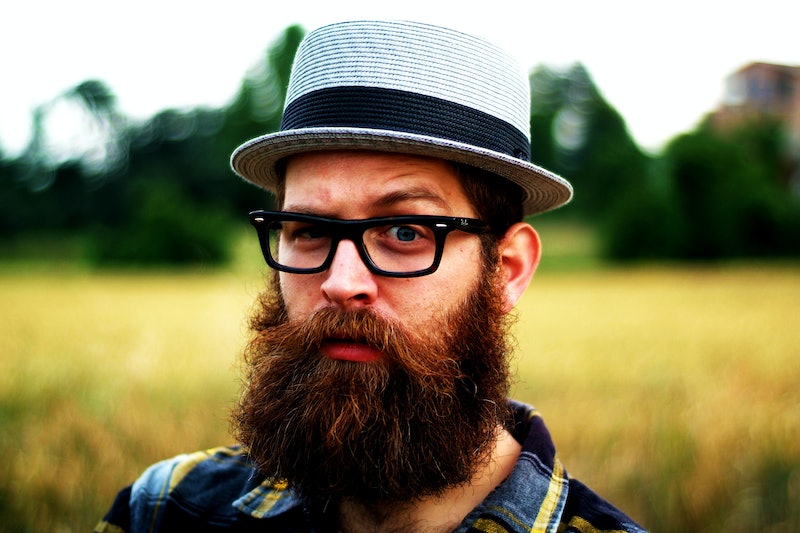 Facial hair fanatics of the world, your dream has finally come true! Introducing Bristlr social network for beard lovers, your one-stop shop for finding your Knight-In-Fuzzy-Chin-Hair. Bristlr is sort of like OKCupid, but for beards instead of dates. What could be better?!

It's the creation of bearded genius John Kershaw, 27, from Manchester. You read that right: he is bearded and British (swoon). Sorry, I can't confirm if he's single but if he is, it won't be for long. So far Bristlr is a website, so think less Tinder and more OKCupid, but an app is in the works Also, although it resembles a dating site, nowhere does it explicitly state that Bristlr’s purpose is to foster romantic connections, only hand-to-beard connections.

To access these glorious beards, log onto the website and put in your email. Then, click the activation link in your inbox and voilà, get to bearding. You fill out a profile much like you would any other dating site, with a few distinct differences:

No Annoying-Ass Personality Quizzes: That’s right, no “How would you describe your perfect date?” or any of that nonsense. (Besides, everybody knows it’s April 25th because it’s not too cold and not too warm; all you need is a light jacket). Just an “About Me” section you can fill out (or not) as your heart desires.

No Labels Required: The closest Bristlr comes to asking you your gender or sexual orientation is just a check box that says, “I have a beard.” This means that you have the option of matching with people from all walks of beard-life: men, women, bearded women, those who do not fall within the gender binary, etc.

No “What Do You Want Out of This” Surveys: Bristlr also doesn’t ask your expectations, like if you’re into “dating,” “friends with benefits,” “whatever I can get,” or anything else. I find those questions to be a waste of time because even when I had in my OKC profile that I was not, explicitly NOT looking for a FWB-type arrangement, I still got multiple emails per day from dudes asking if I’d want to be their FWB (No).

I for one thought this “no labels” approach was kind of refreshing, like instead of getting caught up in labels and desired outcomes and all that, we could all focus on the reason we came to the site in the first place: the noble pursuit of beards and those who have them. Was that a chorus of angels in the background as I wrote that sentence, or did I just imagine it?

Once you’ve got your profile down, you scroll through potential matches (of all genders) and there’s a little heart at the bottom of their picture. If you “heart” someone and they “heart” you, then you get matched up, and can message each other, presumably to say, “Hey. I like your beard.”

I signed myself up for the site in the name of journalism, and, scrolling through my list of potential matches, my immediate thought was, “Wow, there are a lot more pretty girls on here than there are good-looking guys with beards…I’m OK with that.”

Also, a lot of people’s usernames somehow incorporated the word “beard,” which I guess is to be expected.

So I decided to focus less on the attractiveness of the dudes on there, but rather on the beards. I’m not suuuuper into beards myself (like they’re fine, but I prefer just some scruff or even a chin strap — yes, I’m from Long Island) so I chose who to “heart” based on three criteria: cuteness, quality of beard, personal style, and personality. For instance, there were a few regulation hotties, and they got the like regardless of how full their beard was. For the rest of the guys, if they had a kick-ass, flowy beard, I “liked” them. If they were wearing a cool flannel and some Ray Bans or otherwise demonstrated they have a good sense of style, I threw them a like. If they were making a goofy face, I gave them a like.

(Obviously I liked this guy for his funny face and his kick-ass moustache).

After I went through everyone I possibly could — literally — it was time to play the waiting game. While I waited for the hordes of admirers to start rolling in, I went to the “Rate Beards” page and just started rating guys’ beards, on a scale from 1 to 5 stars. Boy, was that fun!

I rated beards according to the 4 C’s: Consistency (fullness), Color, Cut, and Condition (like was it scraggly or not?).

Here is an example of one beard that earned a 5-star rating:

Note, the vibrant red color, the incredible length, the thickness, and the overall well-kempt appearance of the beard (also, those arms). Oh my god, I want to burrow myself inside that beard like a little bunny.

I’ve pretty much covered everything that is awesome about Bristlr, so onto the downsides:

So far it’s been a couple hours and I haven’t gotten any messages yet. For now, I’m signing off but I’ll be sure to keep you all updated on my bearded adventures!

More like this
6 Steps For A Successful Healing Manifestation Ritual
By Kristine Fellizar
These Are The 3 Most Mellow Zodiac Signs
By Kristine Fellizar
What Does “The Rizz” Mean On TikTok? The Viral Slang Term, Explained
By Alexis Morillo
How “Goblin Mode” Came To Be The Oxford Word Of The Year
By Sophie McEvoy
Get Even More From Bustle — Sign Up For The Newsletter