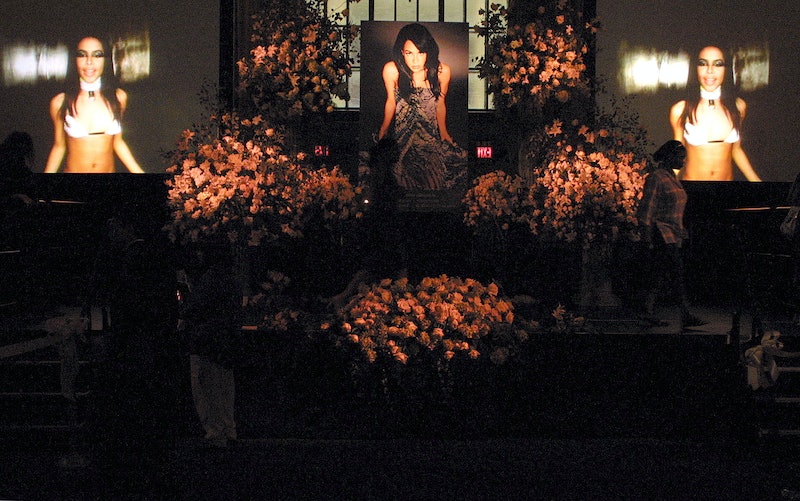 Aaliyah seemed destined for a long career, blessed with a gorgeous voice, immense talent, and the right people on her side. She signed her first record deal at 12 with Jive Records, and put out her first album at 14. The songstress even made a leap into acting with movie roles in the films Romeo Must Die and Queen of the Damned. But just as her star kept rising, Aaliyah died at 22 in a plane crash on the way back from the Bahamas in 2001, and her parents settled a negligence lawsuit against the owners and operators of the airplane. Lifetime's Aaliyah: Princess of R&B TV movie, premiering Saturday night, will chronicle her life leading up to that fatal day.

Aaliyah and her entourage were in the Bahamas not on vacation, but to shoot the music video for her hit-single-to-be "Rock the Boat" from her wildly successful self-titled album. On Aug. 25, 2001, she and eight others perished aboard the a twin-engine Cessna 402B, which crashed shortly after takeoff approximately 200 feet from the runway of the Marsh Harbour Airport in the Abaco Islands. Here's what else we know about the fatal incident.

According to the island's coroner Dr. Giovander Raju, Aaliyah died in the crash from a blow to the head, severe burns, and a weak heart. "Aaliyah went into such a state of shock, even if she had survived the crash, recovery would have been near impossible," Raju told NME.

An autopsy revealed that the plane's pilot Morales, 30, had cocaine in his urine and traces of alcohol in his stomach at the time of the fatal plane crash. Earlier that month, Morales pleaded no contest to cocaine possession and was sentenced to three years of probation. Technically, he wasn't authorized to fly the plane and his pilot's license should've been revoked due to the charge and probation.

Not only was Morales questionable in flying the plane that day, but investigators believed that the aircraft was overloaded by 700 pounds and Blackhawk didn't even have permission to operate flights in the Bahamas. Yikes. The lawsuit was settled and the details have been kept confidential.