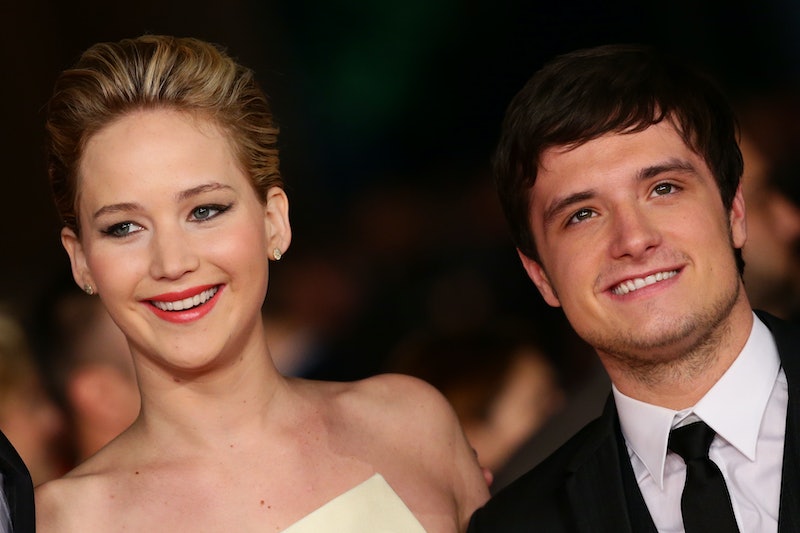 We are fast approaching the release of The Hunger Games: Mockingjay, Part 1, and now the fun part's begun: A Jennifer Lawrence press tour. She already went straight back to chaos with David Letterman, and on Thursday's Good Morning America it was Lawrence, Josh Hutcherson, and Liam Hemsworth reveling in their own kind of chaos. Along the way they also introduced a new Mockingjay clip, this one centering on a pretty big difference of opinion between Katniss and Gale.

The GMA interview itself was half run-of-the-mill and half surreal: The mixed-up ramblings of the cast gave way to the revelation that Lawrence and Hutcherson actually live down the street from each other now and so are as close as ever (Lawrence totally followed him). Then halfway through the video the camera spins around to reveal the crowd of superfans who have been standing right there all along, and it's a strangely creepy reveal.

But to me the real story here is the new clip the cast introduced. It's an expansion of a scene we've already seen reiterated in the promo materials plenty: Peeta making an announcement to the Districts, Katniss being wracked with worry. This clip shows more of Gale's side, though: Peeta's proclamations are (understandably) a little too Capitol-friendly for his tastes, and he declares that he'd never let himself be manipulated in their favor the way that Peeta has.

It's a pretty tense clip, and one that highlights one of the biggest challenges in the relationship between Katniss and her longtime best friend: Gale is worried about the greater good — Katniss, though, is most worried about the people she loves. It's one of the elements that makes Katniss such a compelling hero to be leading this story: She's not an automatic revolutionary, and her motivations are more complicated than what's immediately right and wrong. This is a dynamic that definitely affects Katniss and Gale through to the end of the series, so it's nice to see it actually explored onscreen.