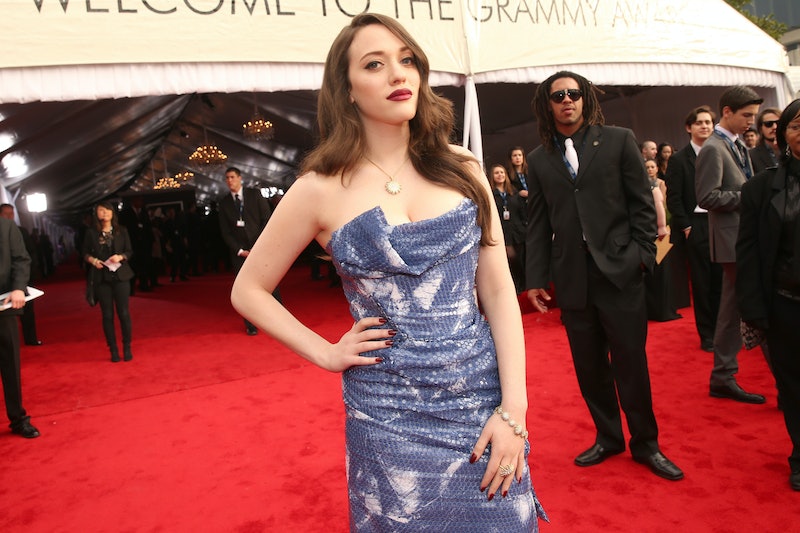 With its shortened final season, The Newsroom isn't wasting any time jumping right into the plots that will span its six episodes. Everything came to head at the end of the season opener, when we learned Sloan's "puzzle" resulted in her realization that someone's making a play for Atlantis Cable News. And, for company CEO Reese (played by guest star and Mindy Lahiri's boyfriend, Chris Messina) it's a family affair. Sloan informs him that his younger half siblings will make a power play for control of the company, once they receive their 45 percent share on their upcoming 25th birthday. One of these siblings is played by Kat Dennings — and that's a win for all of us and Sorkin dialogue. But Dennings isn't here to play nice and crack jokes. What could Denning's Blair Lansing want with ACN? It's no secret that the company is in fourth place. They lost a majority of their viewership after the whole Genoa incident, and still haven't regained the trust of the audience. Will's trying so hard. Mac's trying so hard. Even Don's trying his best. But it might not be enough. Let's be real — ACN is falling fast no matter what production tricks they might have up their sleeve. Maybe a new company owner wouldn't be the worst thing ever.... But the way Dennings stares straight ahead, so stoic, so powerful, in the preview for Sundays episode, we know she's up to something. What is it?

It's probably money related. It's probably family-money related. When Sloan finds Reese lying on her couch in her office, and he tells her that he's got half siblings, even Sloan mentions that this is the first time she's hearing of his half-siblings. This is the first time we're hearing of them, too. And long-lost family doesn't come out of the woodwork for just any reason — except money.

Reese explains that his half siblings like to party hard, and spend a lot of their time going to different parties all over the place. Something, or someone, has to fund that extravagant lifestyle, and control of a cable network just might do the trick. Or better yet, selling the network will certainly put a few extra dollars into their pocket. From the events of the first episode of the season, it looks like the news team is going to work real hard to see their plan stopped. Even Leona isn't too happy about it.

According to TV Guide, Dennings will be sticking around for a few episodes at least (but then, considering the condensed season, a few really equates to half). Showrunner Aaron Sorkin told Entertainment Weekly that the hostile takeover of ACN will play more into this season than the events of Genoa. He's also someone who is very tight lipped about upcoming plots and spoilers, so we won't know what's happening until it's happened on the show. Either way, it'll be exciting to see Dennings play what appears to be a spoiled little sister.