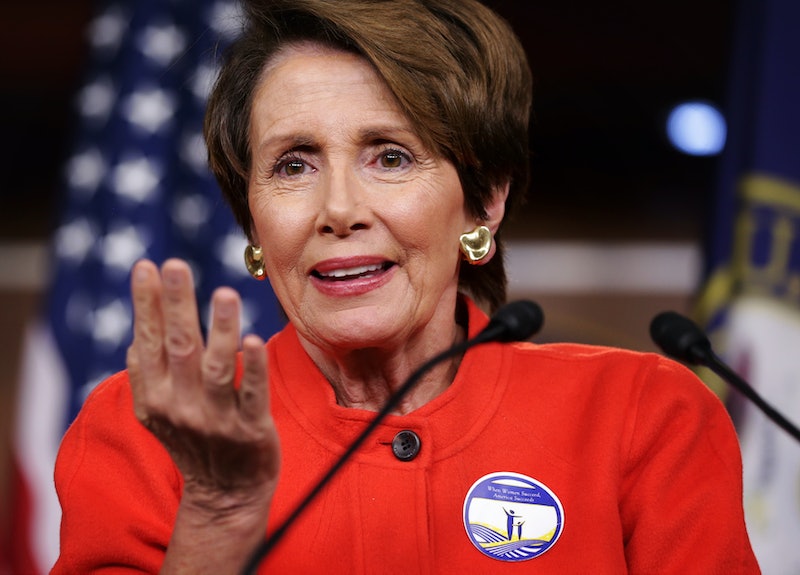 There is no clearer indication of sexism in the workplace than the need to qualify a title with the prefix "female." A "female doctor," a "female engineer," a "female scientist," are used to describe the apparent surprise that accompanies a woman in historically male-dominated fields. And no field is more male-centric today than politics. On Thursday, Former Speaker of the House Nancy Pelosi decided she'd had enough of aegist and sexist questions and spoke out about the double standard in politics in a move that is now decades overdue.

Responding to a question from CBS News congressional correspondent Nancy Cordes, who asked Pelosi if she felt it were time to step aside given the Democrats' tough loss in the recent midterm elections, Pelosi expressed frustration at a question that women in politics (and across fields) seem to face much more frequently than men. Pelosi, who is 74, is the same age as outgoing Senate Majority Leader Harry Reid, and only two years older than Mitch McConnell, who will be taking Reid's spot at the age of 72. But of the three, Pelosi claims that she is the only one who has been asked, time and time again, whether her age is affecting her leadership skills, and whether it may be appropriate for her to cede her position to a younger, newer politician.

In response to the reporter's question, Pelosi replied,

And Pelosi has answered that question, or a version of it, multiple times in the past. In 2012, NBC's Luke Russert asked her if she was preventing the party from enjoying "younger leadership," which Pelosi (understandably) bristled at, calling the question "offensive." But two years later, the media circus continues marching to the same tune, recycling the same tired questions about her age over and over again.

It is a trope that women across the world have heard all too often — as men age, they become more desirable, gaining experience, worldliness and gravitas. The silver fox of a bachelor is a catch at 60, but the unmarried woman of the same age is a spinster, an old maid, a shrew. Our very language makes it impossible to not connect ageism with sexism. While Pelosi may not be entirely correct in saying that older male politicians do not often receive the same scrutiny for their age (McConnell's much younger opponent called him the "senior Senator" because of his age during her campaign) there is a more pervasive societal trend that creates an inequity between older men and older women that is too often ignored when it comes to politics.

When Hillary Clinton announced that she was to become a grandmother, among the first reactions from media outlets was whether she would still be a viable presidential candidate in 2016. Would she be able, some wondered, to be both a grandmother and a president? Never mind, of course, that when George H.W. Bush ran for president, he was a grandfather many times over. Never mind, of course, that when Mitt Romney ran, he had more than 20 grandchildren. While John McCain certainly faced some questions about his age during his 2008 bid for the presidency, he was able to laugh them off with responses like, "I'm older than dirt and have more scars than Frankenstein, but I've learned a few things along the way." Were a woman to make the same response, she would be political roadkill.

Unfortunately, the experience that comes with age is gender-blind, but our perception is not. Ageism is a problem that affects both men and women, but it does not affect both genders equally. The combination of being "over the hill" and a woman is often a lethal one, and given how heavily dependent politics is upon public perception, perhaps it is no coincidence that the proportion of women in Congress remains so low. Though these midterms saw 100 women in Congress for the first time in the history of the United States, this represents less than 25 percent of the entire legislative body, and in over 300 years of history, there still has yet to be a female president.

Congress is not only historically male-dominated, but also older male-dominated, making it even more difficult for women to make their mark. The 111th Congress had an average age of 57 in the House and 63 in the Senate, the oldest in history. Ironically, when women first became politically active on the national level in the 1970's, the average age of the female representative was older than that of her male counterparts. In her book A Woman's Place Is in the House: Campaigning for Congress in the Feminist Era, Barbara Burrell notes that this was likely because women had to work harder and wait longer to establish themselves as "serious" political figures, and also because they had to wait for their children to grow up.

While this is no longer as true today, as more and more female members of Congress have young children at home, or even give birth while in office, there remains a clear gap in female and male representation in our government, and it is a trend that has been deemed acceptable for far too long. And while Nancy Pelosi may be speaking about ageism and sexism in politics in particular, there is a gap across the country and across industries that needs to be addressed. Pelosi's acted on behalf of a "mission for women on this score," and it's one that needs to be settled sooner rather than later.