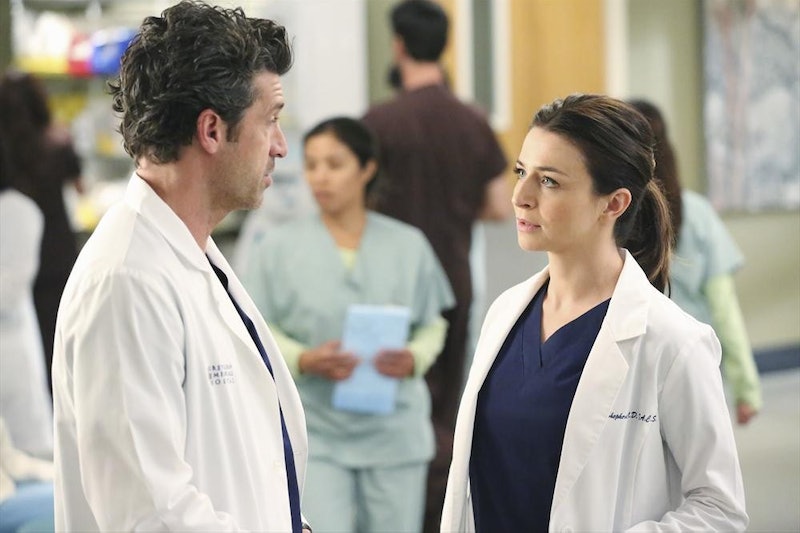 Thursday night television was pretty heavy with all the stuff on Grey's Anatomy about Amelia Shepherd's former drug addiction and Derek Shepherd being particularly douchey. But the most troubling part of the episode was the totally sexist double standard the hospital had towards their doctors' pasts. In the start of the episode Amelia's time in Narcotics Anonymous was revealed when a fellow drug addict outed her to the surgical wing. It was all downhill from there. Owen Hunt got all puritanical about things and went to Derek to find out if he should fire her. Never mind that Amelia has been in recovery for a long time and is actually excellent at her job.

But Owen's pious attitude was made twice as obnoxious considering the kinds of things those male doctors have gotten away with over the years. Owen himself had severe PTSD when he first came to Seattle and even tried to choke Cristina Yang. Did he get fired for that? No, he got sympathy.

How about when Dr. Burke returned to surgery before his hand had healed and operated on patients anyway. Or, better yet, he let intern Yang operate on them even though she was hardly qualified for those procedures.

Oh, yeah then there was the time that Chief Richard Webber came to work completely drunk because he was an ongoing addict, rather than a recovering one like Amelia is. But all was forgotten when he came back to work and not a word was mentioned about it again—except for every once in awhile when he gets to boast about getting his one-year sober chip, or something.

Every single doctor in that whole hospital has had their bad moments—and they've all gotten away with it. But all it takes is the mere idea that Amelia used to do drugs and it's all over for her. One uncertain look from Derek, and Owen called a whole board meeting designated to firing her. He never discussed things with Amelia. He asked her to, but when she declined because the whole anonymous part of NA gives her the right to privacy, he rushed off to get Derek's opinion. Who by the way, just wanted her job and would have thrown his sister under the bus to get it. Is that the kind of doctor that hospital wants to get advice from?

If Grey's Anatomy is going to persecute someone for their past, fine. But then it needs to do so on a gender neutral basis—and those boys have a lot that they need to own up to.