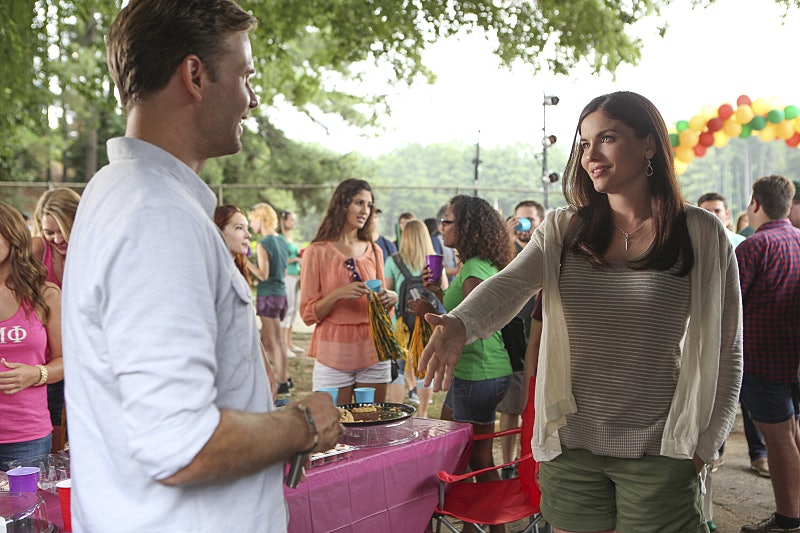 You didn't think they brought Jo on just to be Alaric's love interest, did you? I've been skeptical of The Vampire Diaries' new witchy doctor ever since Alaric tried to compel Jo and failed. But, honestly, I didn't see this twist coming. On Thursday night, Jo took Alaric home where she revealed a pretty tragic and scary part of her past — Jo is Kai's sister on TVD , as evidenced by a huge scar on her stomach and a chilling anecdote about how she got it. Which should lead us all to wonder whether or not Jo chose not to practice magic or if Kai stole all of her powers.

As a TVD fan from the beginning, I should've seen this coming. There was no possible way that Kai was just going to enter the fold on The Other Side without having any connection to the real world. I mean, c'mon, he told just straight-up that he had some family left and that he couldn't wait to get out of his '90s prison to finish them off. Well, now we know exactly who he might be referring to — the brilliant new doctor who turned Alaric human and ruined all of the chances for a Delena reunion. As far as I'm concerned, Kai can have her. OK, fine, that was harsh, but she did skewer Delena and for that, she should probably pay. A little.

But anyway, on Thursday night, Jo invited Alaric to a fundraiser for the hospital where they obviously hit it off, even though he tried to compel her that one time and she totally knew. And, in the way all great dates end, Alaric ended up at her apartment where Jo, in an attempt to be seductive, undressed in front of a mirror and revealed the huge, painful-looking scar on her stomach. Obviously Alaric asked about it and Jo admitted that her brother had tried to kill her with a hunting knife and then joked about having a screwed up family. And boom, there was all the evidence we need to conclude that Kai and Jo are absolutely related.

So, what does that mean for Jo? Well, we know that she doesn't practice magic and now we know why. It's possible that Jo stopped practicing because of what Kai did to their coven, but it's also possible that she feared that her brother would steal her powers. OR Jo might be the one who sent Kai to 1994 and decided that, from that day on, she wouldn't practice magic anymore. The possible connections between Kai's prison and Jo relinquishing her powers are endless, but the fact is simple — these two are brother and sister and I can't imagine there reunion will be a happy one.