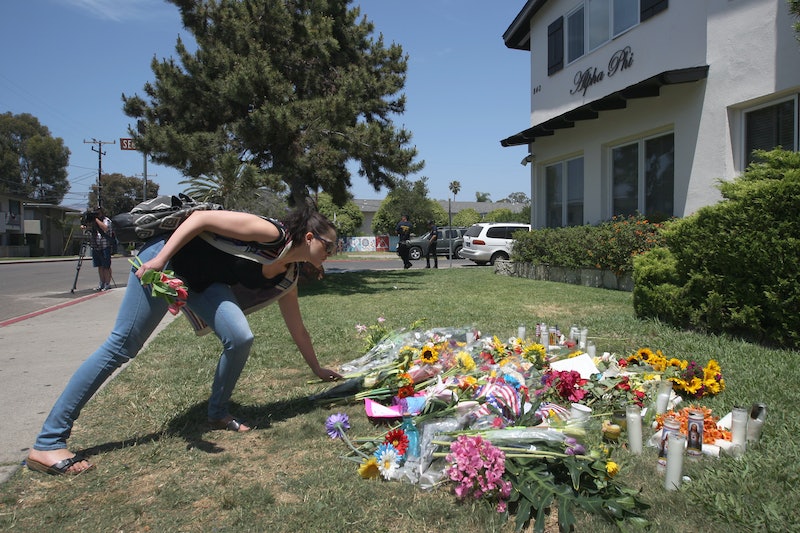 We tend to think of the holiday season as a time of great cheer. And while it certainly can be, psychologists also say that the first Thanksgiving, Christmas or Hannukah after the death of a loved one can be one of the hardest times for mourners. It makes sense: all the celebrations can just make you miss them more.

Grief is a deeply physical as well as psychological trauma. In the aftermath, we experience shock and often deep anxiety and guilt, as the part of the brain that copes with our readiness for fighting goes into overdrive: our brain releases a higher-than-usual level of cortisone, which also lowers our immune systems (hence all the stories of people "dying of grief"). An over-stimulated nervous system wreaks havoc on our ability to understand and react to the world. So grief can seem endless, formless, and painful; physically as well as mental debilitating.

Fortunately, because it's a constant in human experience, many of the greatest artists throughout history have expressed their thoughts on bereavement, and how we might learn from and cope with it. Here are 12 telling quotes to help you in your mourning, expressing the inner patterns of grief, how it makes us behave, and how, even if it seems endless, there will eventually be lightness.

On the cycles of grief:

“For in grief nothing 'stays put.' One keeps on emerging from a phase, but it always recurs. Round and round. Everything repeats. Am I going in circles, or dare I hope I am on a spiral? But if a spiral, am I going up or down it? How often - will it be for always? - how often will the vast emptiness astonish me like a complete novelty and make me say, "I never realized my loss till this moment"? The same leg is cut off time after time.” — C.S. Lewis, A Grief Observed

C.S Lewis's memoir of grief after his wife's death is one of the classics of literature about mourning, for its frankness, its refusal of easy consolation, and its exact reproduction of what it's really like to be in the midst of grief, coming back again and again to pain.

"It's so curious: one can resist tears and 'behave' very well in the hardest hours of grief. But then someone makes you a friendly sign behind a window, or one notices that a flower that was in bud only yesterday has suddenly blossomed, or a letter slips from a drawer... and everything collapses." — Colette

Colette, the French writer, identified "triggers" as skillfully as a modern-day psychologist. Mourners are often aware of danger areas, songs, or even smells that break their daily reserve and push them into grief: human emotion is strongly linked to memory.

"Give sorrow words. The grief that does not speak whispers the o'er-fraught heart and bids it break." — Shakespeare, Macbeth

William Shakespeare destroys the myth that pulling your socks up and "just getting on with it" is a solvent for grief. Stiff upper lips ain't no help. Even if it's in a small way, talking to somebody, or expressing your feelings in some other way, is a helpful part of the process, even if it feels self-indulgent.

On continuing to live:

"No, forgive me.If you are not living,if you, beloved, my love,if youhave died,all the leaves will fall on my breast,it will rain upon my soul night and day,the snow will burn my heart,I shall walk with cold and fire and death and snow,my feet will want to walk to where you are sleeping,butI shall go on living,because you wanted me to be, above all things,indomitableand, love, because you know that I am not just one manbut all men." — Pablo Neruda, The Dead Woman

Pablo Neruda's poem The Dead Woman remains revolutionary for talking about one of the darker sides of intimate grief: that when a person goes, we can want to go too. But, as he says, insistently, "I shall go on living," despite his loss; and the desire to live is no shame and no indication that he doesn't care.

On what to say to people in mourning:

"What do you say? There really are no words for that. There really aren't. Somebody tries to say, 'I'm sorry, I'm so sorry.' People say that to me. There's no language for it. Sorry doesn't do it. I think you should just hug people and mop their floor or something." — Toni Morrison

Toni Morrison, the Nobel Prize-winning author, was brutally honest in an interview about her son's death in 2012, 18 months after it had happened. In the face of such grief, words are comfortable but useless; actions, "hugging and mopping the floor," often offer more substantial help in the moment.

On how to cope:

“While grief is fresh, every attempt to divert only irritates. You must wait till it be digested, and then amusement will dissipate the remains of it.” — Samuel Johnson

Samuel Johnson, the English wit and thinker, was famously grumpy, but his thoughts on the futility of anybody trying to "cheer you up" when you're grieving aren't just misanthropic. Attempting to charge through grief by distracting yourself, rather than letting yourself process, is a bad idea.

On the meaning of loss:

"The deep pain that is felt at the death of every friendly soul arises from the feeling that there is in every individual something which is inexpressible, peculiar to him alone, and is, therefore, absolutely and irretrievably lost." — Arthur Schopenhauer

The philosopher Arthur Schopenhauer was renowned for his gloomy pronouncements and frankly depressing outlook on things. However, when it came to pinpointing exactly why it is that we grieve the loss of a person, he hit the nail on the head.

On what grief gives us:

"And when great souls die,after a period peace blooms,slowly and alwaysirregularly. Spaces fillwith a kind ofsoothing electric vibration.Our senses, restored, neverto be the same, whisper to us.They existed. They existed.We can be. Be and bebetter. For they existed." — Maya Angelou

The late writer Maya Angelou's poem "When Great Trees Fall" was the last poem in her fifth volume of poetry, I Shall Not Be Moved, and remains a standard when great and lauded figures (including Angelou herself) pass away. However, its message, to let the existence of the absent inspire you, is equally applicable to the ordinary great souls of the world.

"Loss is nothing else but change, and change is Nature's delight." — Marcus Aurelius, Meditations

The Roman emperor Marcus Aurelius was also a philosopher and writer, devoted to thinking about the meaning of life beyond banquets and empires. His attempt to look at loss as a part of a bigger picture, a perpetually changing world, is a good grounding.

On learning to be with loss:

"Every love is carved from loss. Mine was. Yours is. Your great-great-great-grandchildren's will be. But we learn to live in that love.” — Jonathan Safran Foer, Everything Is Illuminated

New York writer Jonathan Safran Foer's books centre around grief, cultural as well as individual, and carry the lesson that grief is not only inevitable, it is essential. It forms the other half of appreciation and love.

On being happy again:

“And when your sorrow is comforted (time soothes all sorrows) you will be content that you have known me. You will always be my friend. You will want to laugh with me. And you will sometimes open your window, so, for that pleasure . . . And your friends will be properly astonished to see you laughing as you look up at the sky! Then you will say to them, 'Yes, the stars always make me laugh!' And they will think you are crazy. It will be a very shabby trick that I shall have played on you...” — Antoine de Saint-Exupery,The Little Prince

This astonishingly hopeful and surreal little vignette from the famous French writer Antoine de Saint-Exupéry captures the wish for every grieving person: that mourning will change into happiness and gratitude that you knew the person who is gone.