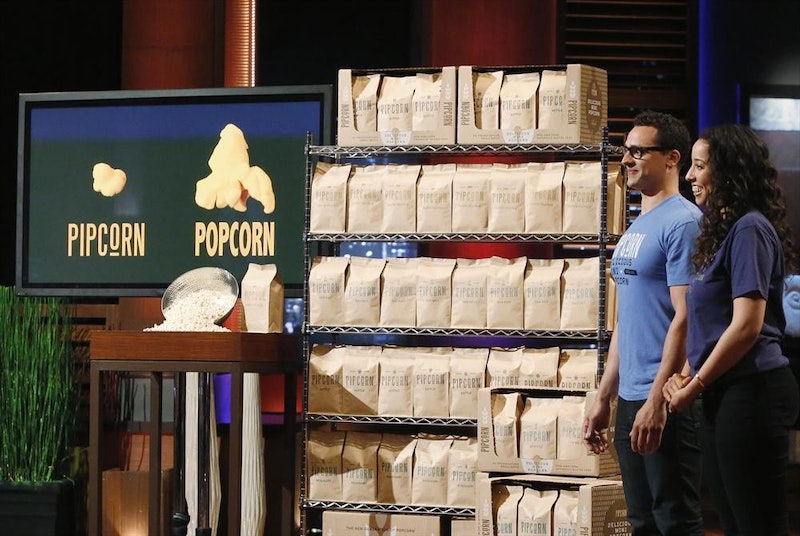 Ready to see the hipster healthy snack of your dreams? Pipcorn will appear on Shark Tank this Friday, and it definitely fits that bill. What’s pipcorn? Well, it’s tiny popcorn, but it’s also the entrepreneurial venture of brother-sister duo Jeff and Jen Martin. I have to say, I really love that they’re brother and sister — we’ve seen many a sister-sister, brother-brother, mother-daughter, mother-son (you get it) partners on Shark Tank, but not many brother and sister pairs.

Not to mention, Jeff and Jen have dynamite smiles, are wearing coordinating chambray shirts on their website, and as Lori Greiner might tell them, they just look cool. Young people! The Martin siblings came up with Pipcorn when Jeff was helping Jen move apartments in Spring of 2010 and they were in need of a snack. She sent him to pop some tiny kernels she had found the day before, and suddenly, they were eating the best popcorn (pre-pip) they’d ever tasted.

Two years later, Jeff and Jen were popping Pipcorn for the masses, reading up on running a business, and creating a brand that’s already made quite the name for itself in gourmet food circles. And someone in the fam clearly has graphic design experience, because the second it was announced that Pipcorn would be featured on Shark Tank, they had a hip little graphic of Jeff and Jen in shark party hats on their website. I have a feeling the Sharks are going to like the branding brains on these two.

At first, I had a little trouble understanding why mini popcorn would be any better that regular-sized popcorn — this is not an M&M situation, after all — but Jeff and Jen explain it well. The hull of the smaller kernels they use is much smaller and more delicate than the hull of a regular kernel. So, when it pops, it shatters into much smaller pieces, meaning no big popcorn kernels getting stuck in your teeth (or heaven forbid, the back of your tongue).

The tiny kernels come from a farm that grows the special variety, but it’s after the popping that things really get interesting. Pipcorn doesn’t mess around with butter, gluten or GMOs; Jeff and Jen pop all of the kernels using only a little olive oil, and Pipcorn flavors include: Truffle, Sea Salt, Kettle, and Rosemary. Even beyond the taste of Pipcorn, it hops right off the shelf — and webpage — at you in its fun, but simplistic packaging.

If you're dying to try some Pipcorn now, you can buy any of the flavors mentioned above on the Pipcorn website, where three bags cost $18. It's also available in a variety of stores in the New York area.

Oprah’s on Board (twice)

Oh yeah, and Pipcorn has been featured on Oprah’s Favorite Things list… twice. PIPCOOOOOOOORN! To be featured on Oprah’s list once is a big deal; to be featured twice is practically unheard of. My guess is that Pipcorn is growing faster than Jeff and Jen have the overhead to accommodate. Even though their business only started two years ago, it’s a simple concept, with what seems to be excellent execution, so hopefully Jeff and Jen have the sales to back their idea up. The Sharks will be asking “What’s next?” and if they’ve got answers, then they’ve probably got a deal.