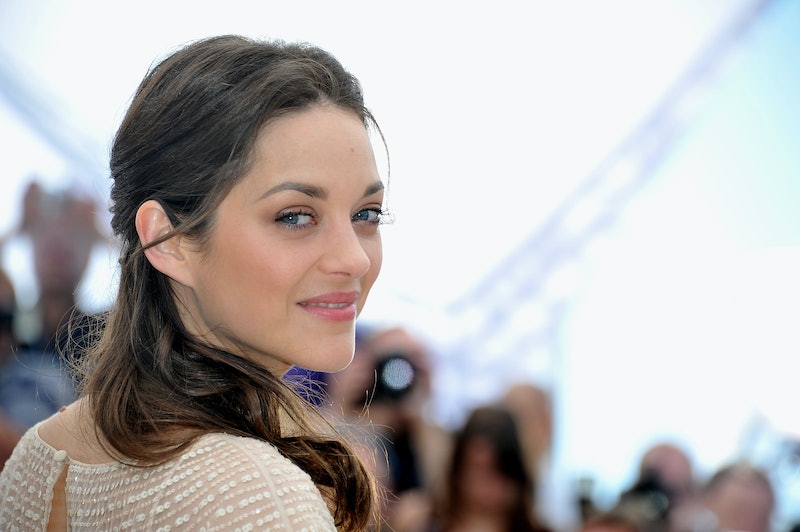 Dior has a history of selecting multitalented and worldly women as the face of the brand, and so one would expect that in at least a single advert, the luminary in question would perform more than just a catwalk strut towards the camera. Marion Cotillard stars in a Dior ad-meets-music video featuring the brand's Cruise 2015 Collection entitled Enter The Game which was first featured on the i-D Magazine website, and quite simply, the star proves she has more than a few hidden gifts up her sleeve. UK-based electronica band Metronomy's Joseph Mount produced the hallucinatory project, Eliott Bliss collaborated on writing and direction, and Cotillard herself provides the lilting background music in the form of a song called Snapshot In LA.

Set in the backyard of an achingly beautiful, glass-encased, modern French home, the short film opens on a black romper-clad Cotillard, locks curled and a slick of crimson lipstick polishing off the look, lounging in front of an infinite edge pool. Cotillard sashays to her waiting bar where she refills a martini glass with an intoxicating-looking pink mixture, and proceeds to saunter out to her pool. After testing the water, Cotillard tosses aside her Dior heels — pointy toed and black, of course — and takes the plunge. Except Cotillard doesn't dive into the pool; this being a French film, and Cotillard the celebrity she is, the actress literally walks across the pool, elegantly ricocheting off its surface before landing at the opposite side and beginning a modern-meets-breakdance routine. Tiring of this, Cotillard finally jumps in, swimming with what appears to be a Dior scarf at her side.

The video is as much an ode to Cotillard's fit physique as it is to the Dior clothes and of course the actress's voice, but Dior's Silver Mini Lady Dior Bag and the French countryside take equal credit for the film's charm. If you haven't had your daily dose of transcendent music, check out Enter The Game. It's not often you see celebrities literally walk on water.