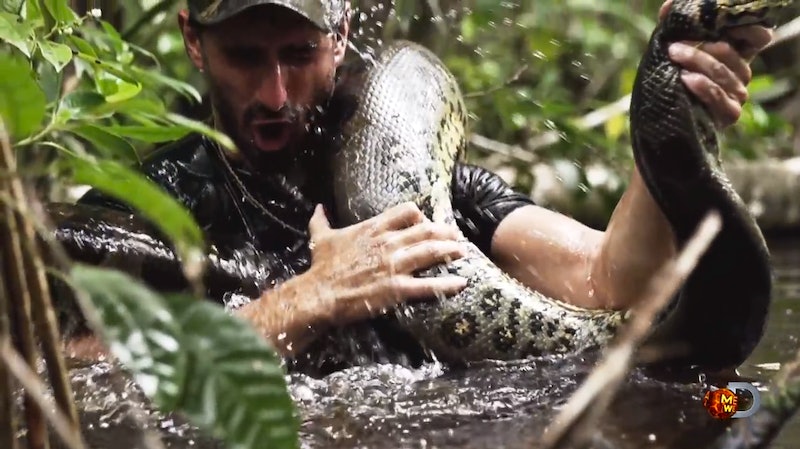 We all have dreams. For some it's to become an astronaut, for others to discover the cure for cancer. For Paul Rosolie, it's to be eaten alive by a giant snake. Hey, the heart wants what it wants. That's the premise of the Discovery Channel special Eaten Alive : Rosolie gets eaten by an anaconda and lives to tell the tale. As for whether or not the mission was successful and how it all went down, you'll have to see for yourself when the show airs on Dec. 7. But you may not get to — because a Change.org petition is trying to pull the plug on the show, arguing that the stunt is animal abuse. The whole thing is fraught with headaches. Why not just take a selfie with the snake and call it a day?

But seriously. According to a press release by the Discovery Channel, the show's intentions are noble, but those intentions do not translate well in the execution. Rosolie, who is a snake researcher and conservationist, says in the release:

I’ve seen first-hand how the Amazon Rainforest is being destroyed. It is so rampant that we may be the last generation with the opportunity to save it. People need to wake up to what is going on. What better way is there to shock people than to put my life on the line with the largest snake on the planet, the Green Anaconda?

Huh? Wait, did I miss something there? How does watching you get swallowed whole compel the world to go save the Amazon? I mean, I'm not questioning or trying to undermine Rosolie's career-long dedication to studying the giant green anaconda, but come on. Just call it what it is — Shark Week with snakes. In other words, TV ratings.

Rosolie supposedly donned a special suit for the stunt, which was designed to protect both the man and the snake. The release states that the force of an anaconda's constriction is equivalent to a large school bus sitting on one's chest, so ... yeah. Special suit it is. However, the release does not mention how the suit helps to protect the snake, or how any of this is really all that great for the snake.

The argument presented by the petition organizer makes more sense. The petition states:

This is animal abuse to the highest degree and absolutely disgusting, and could kill the snake — an adult green anaconda cannot fit the width of an adult man's shoulders into it's body.

It once again reinforces the negative stereotype of snakes, which one would think would be the opposite of what Discovery should be trying to do.

That's true. Why would anyone want to save something that can do that to a human? It doesn't necessarily spark a sense of conservational duty. Again, I'm not doubting that Rosolie takes forest and snake conservation very seriously, but there are other ways, countless other ways, to promote awareness of these awe-inspiring creatures. I mean, all you have to do is show it. But for anyone who's seriously concerned about the state of the snake post-stunt, the Discovery Channel assured that both Rosolie and the anaconda are healthy and alive.

Watch a teaser for the special below.

More like this
Michael & Kathleen Peterson’s House From ‘The Staircase’ Has New Owners
By Kadin Burnett and Kayla Blanton
If You Have Pets, You Probably Don't Realize You're Making These Common Mistakes
By Mackenzie Edwards
25 Cheap Ways To Make Your Cat 5x Happier
By Claire Epting
The 13 Best Dog Sweaters On Amazon
By Katie Evans and BDG Commerce
Get Even More From Bustle — Sign Up For The Newsletter