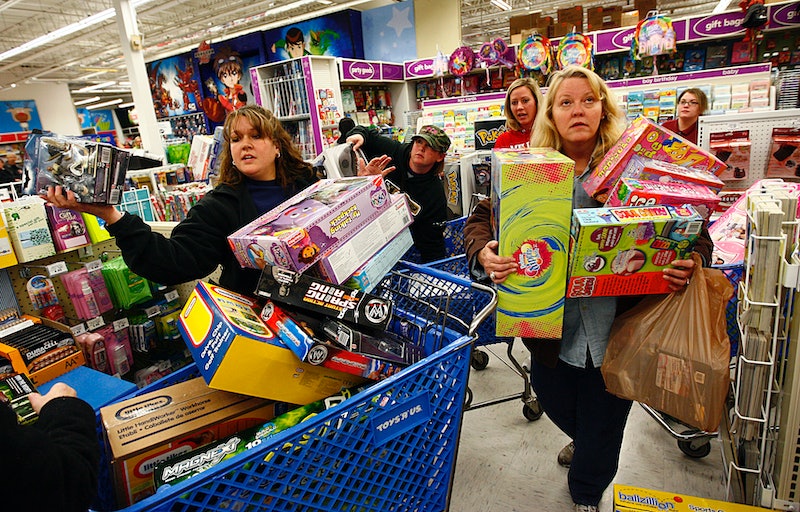 Black Friday. You either love it or you hate it. There's not much middle ground when it comes to the much beloved/feared day of the holiday season. Personally, I can be found locked away in my apartment, maybe perusing the web for online deals... but you won't find me anywhere near an actual, physical store. And can you blame me? Shopping on Black Friday can be dangerous. In recent years, Black Friday shopping has been taken to a whole new level, and a violent one at that. Trampling, gun shots, and being pepper sprayed are no joke, and they are all things that have happened to shoppers in the past six years. That is absolutely,100 percent, without doubt, utterly terrifying.

So like I said, while I'm all about finding a good discount, I just won't be found among the herds of shoppers at any store on the morning after Thanksgiving. Whether or not you choose to brave the chaos (and score the discount) is up to you, but you should be informed on where and how violence has hit in the past. So now that I've totally dampened your Black Friday spirits, let's take a look at some past injuries and incidents.

More like this
5 Crystals For Luck, According To Experts
By Megan McCarty
The 8 Best Professional Manicure Tools, According To A Nail Technician
By Mackenzie Edwards and Danielle Calma
50 Things That Make Your Home 10x Nicer For Under $35
By Rebecca Martinson
The Best Mug Warmers For Keeping Your Coffee & Tea Hot All Day Long
By Masha Vapnitchnaia
Get Even More From Bustle — Sign Up For The Newsletter