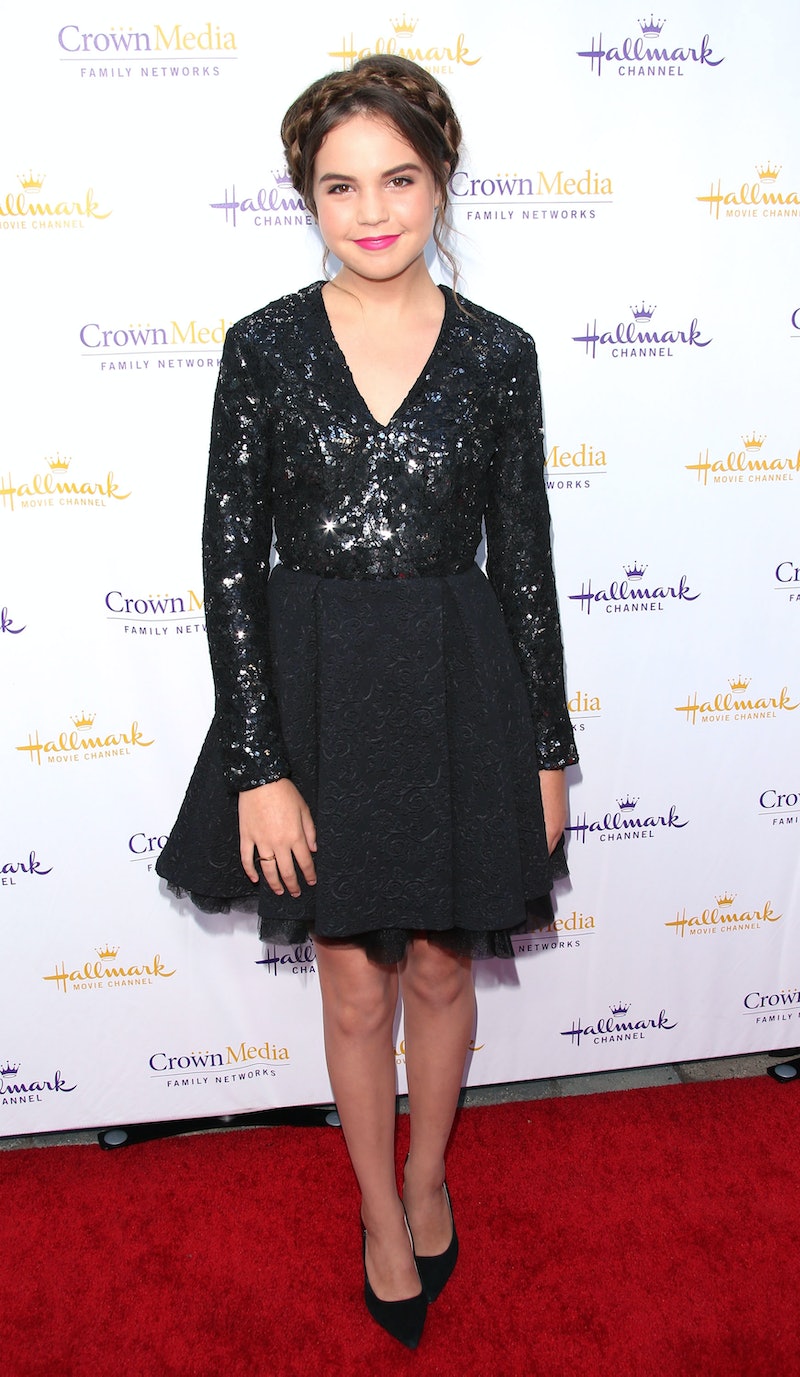 If there were anyone more perfect to play a bubbly, magical, super-positive elf, it's Once Upon a Time and The Foster 's Bailee Madison. The 15-year-old actress has worked with some of the biggest names in Hollywood and on some of the most popular series on primetime television. So, who could blame Madison for being at her bubbliest when she talked to Bustle about her new Hallmark movie and working with some of TV's most badass female characters. On Nov. 15, Madison will star in Hallmark's "Northpole" as Clementine, an adorable, perpetually optimistic elf, with the weight of the world on her shoulders and some super-cool kicks. "She’s just a super fun, lovable character," Madison says, which isn't a far cry from the actress' real life personality.

"Clementine is like this huge ball of happiness mixed up with this crazy bubbly personality and she’s very, very positive," the actress tells me about her upcoming role in the Hallmark Original holiday film. "You can really see just her love and her determination to save North Pole, to save Christmas, so she’s really, really fun," Madison explains about what drew her to the character and what she loved so much about playing the little, quirky elf. Well, her optimism and her crazy wardrobe, which Madison calls a "really fun, fresh, hip" take on the elves we've seen in film and on TV in the past. So don't expect Clementine to be dressed like Buddy the Elf — even if Madison does count Elf as one of her favorite Christmas movies and hopes that she gets to eat spaghetti with chocolate sauce in a Northpole sequel.

While Clementine is adorable and quirky and fun, she also shares her most important characteristic — her determination — with another one of Madison's roles, young Snow White from the ABC series Once Upon a Time. Madison counts her time on OUAT to be an honor and truly something special. The 15-year-old actress says of her character and the female leads on the series, "Eddie [Kitsis] and Adam [Horowitz] are so fantastic in the sense that they’ve created these very strong yet vulnerable and real and could kick some butt if they need to female characters."

Madison also praises Snow White herself, Ginnifer Goodwin, for helping her to fully embody the younger version of her character. "To watch Ginny and to see the way that she created that and to be able to find these really strong moments for young Snow White is such an honor," she tells me before crediting her love for strong, challenging female roles to working on OUAT and being lucky enough to work with Katie Holmes in Don't Be Afraid of the Dark. Madison says of Holmes, "She’s just a really beautiful person who has been there for my mom and I through so much and I love her," before praising the actress' talent, work ethic, and admiring her "beautiful spirit" and "beautiful soul."

And, luckily for the young star, all of these strong roles have prepared her for young Hollywood's big conversation about feminism. "My point of view comes from a not even 15-year-old yet, so I probably don’t know as much," she says with a small laugh before elaborating on what exactly she does know. (Spoiler Alert: She actually knows a whole lot.)

Madison says, "I feel like the word feminist and feminism kind of scares everybody. It scared me when I first heard of it because it sounds like something that’s wrong almost," which is strikingly honest and touches on a huge problem the conversation has faced. But the 15-year-old star says consciously and with intent, "From what I’m learning every day and from what I’m reading, I don’t think it is wrong. It’s showing that women can be just as powerful — they can cook dinner, they can do all of that, but they can stand up in a room and have a voice and create a really great business and speak their mind." And that's something that's extremely important to her when it comes to this movement.

"For me, that’s what it’s saying — that women can walk into a room with 25 men and say, 'This is what I want to do, this is our business, and get there,'" Madison says eloquently. Which is kind of exactly what her Northpole character, Clementine will do in the film — she's going to step up and she's going to save Christmas because young women can, and should be able to, do anything.