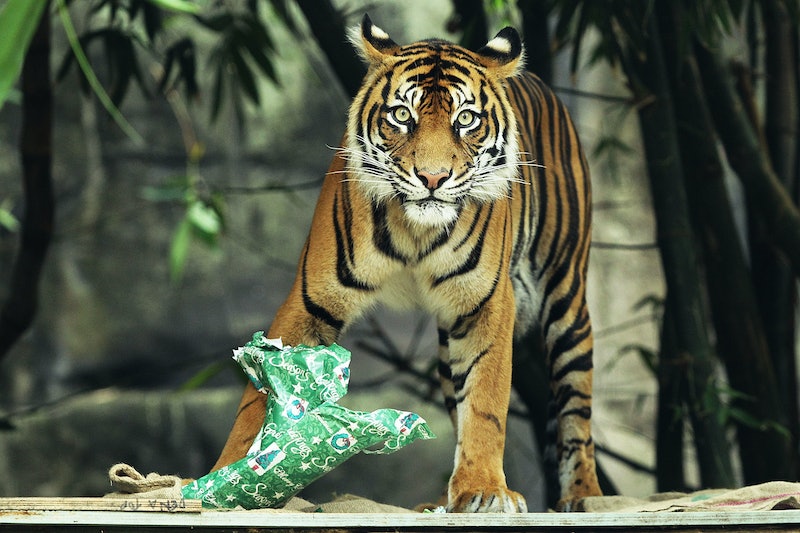 My friend once told me that when he left an airport in Paris, he spotted a stray poodle wandering the streets, and that it was the most "French" thing that could ever happen. But what about a large mysterious cat wandering the French streets? That's just puzzling. What authorities once thought was a tiger roaming through French towns near Disneyland Paris turned out to be something else entirely, so now officials are referring to it as an "unidentified feline." What on earth does that mean?? C'est un mystère, for sure. But let's entertain all the various possibilities.

Law enforcement have been hunting the mysterious wildcat for two days, and so far the only fact they've determined is that it is not a tiger. Well, that's a relief, right? Tigers have been known to not be so chill with humans, especially when they're hungry, which this poor cat is likely to be. But then what could it be? The furry fugitive was photographed in the town of Montevrain, where most of the residents shrugged their shoulders at the news, took a drag of their cigarettes, and continued being the unaffectedly cool French people that they are.

Meanwhile, authorities are conveying a very different message, and news segments show them scrambling in chaos in a scene that looks more like a war zone than a sleepy French town. On Friday, a helicopter flew over Paris as 200 police, military, and other officers searched for the cat. Authorities are vowing to capture the animal alive and not harm it.

If it's anything like my cat when I have to give her ear drops, then it'll be hiding for a good while. Cats are irritatingly smart, they know when they're being chased, and they are better at hiding than humans are at anything. But a word of advice from my own experience: maybe try checking the kitchen cupboards.

As law enforcement continue to hunt for the wildcat, let's ponder just what this "unidentified feline" could be.

Authorities have a theory that the cat is a lynx, which had gone extinct but was reintroduced to France in the 1970s. Judging by the cat's appearance in the fuzzy photos, it resembles this type of wildcat. However, the lynx is not very common in France, inhabiting mostly in northern Europe and the Scandinavian countries. Maybe it got cold? Or maybe it was just bored with its life and wanted to see the sights? It's probably devising a plan to sneak into Disneyland Paris as I type this.

Maybe it's not a wildcat at all. Maybe it's some local's overweight house cat named Pierre, who ran away because his owner and all the neighborhood cats were incessantly poking fun at his tubby stature. Pierre can only take so much before he cracks. He'd rather be taken in by authorities than go back to his old life. At least the authorities make him feel surprisingly lithe as he continues to evade them.

Tiger in a Non-Tiger Disguise

Or maybe this feline is two steps ahead of us all. Maybe it is a tiger, but it's wearing a lynx suit — have the authorities thought of that? Maybe there's a lynx-tiger feud going on in the animal kingdom that we don't know about and the tiger clan are trying to conduct a smear campaign by painting lynxes to be these dangerous nuisances that send police on wild goose chases. We wonder what the lynx tribe will do in retaliation. Hey, crazier things have happened.