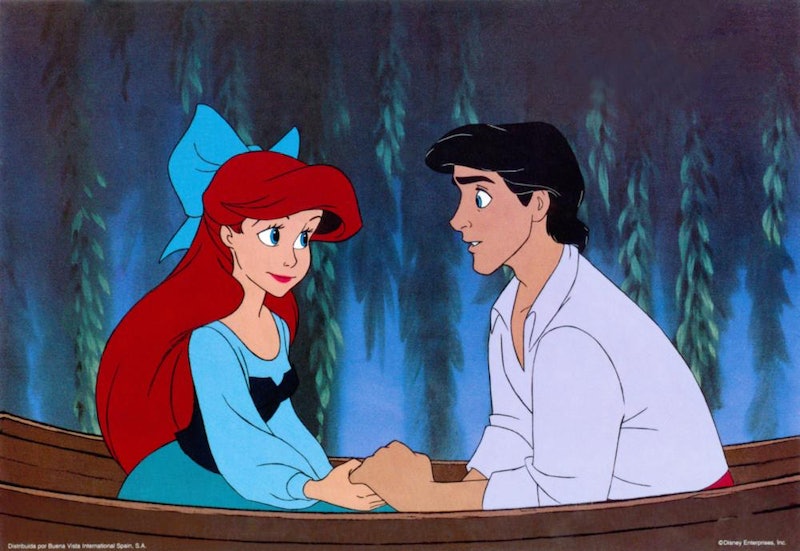 There are certain firsts in life that are unforgettable, and seeing your first Disney movie is one of them. For me, it was The Little Mermaid , and it was an instant favorite. Not only did I spend most of my childhood in a hideous red wig and shiny green fins that my mom created for me on a sewing machine, but Ariel herself played a big part in my own feminist awakening.

When, a few years ago, I found myself locked in a heated debate with my lit theory professor, who noticed my mermaid necklace and wanted to know if I "shut my mouth so that boys will fall in love with me," too, I realized that I had to explain to people that Ariel was one of the earliest Disney princesses to shirk tradition and bravely seek an unconventional life as her own, independent merwoman. Sure, Eric was there, but Ariel was in love with life on land long before Eric came along.

So why am I talking about this movie so much? I hope you're ready to feel old. The Little Mermaid came out this week 25 years ago on November 17, 1989. Since then, it's become a timeless classic, and despite the fact that there have been many princesses to come after her, not even Anna and Elsa can compete. Ariel, trapped in a world where she felt like an outcast, fought her way above sea level, and she almost sacrificed her own life to achieve her dreams. She was a role model to me as a kid and she's still a role model to me today.

Of course, watching the movie as an adult is way different than when you're a kid, and just sort of adore the idea of singing, dancing fish and bright colors while you suck down a juice box. In case it's been awhile since you've seen The Little Mermaid, don't worry — I took it upon myself to watch the movie over again and fill you in on what it's like to be part of Ariel's world as an adult.

The verdict? It's still just as magical as it always was, but... some things about the movie just don't make sense anymore.

The movie starts out with Eric, a supposedly very important prince of a very important unnamed nation, on a boat trip that goes terribly wrong. But how is it possible that a prince could go off to sea for weeks at at time with a bunch of greasy deckhands and his drip of a companion, Grimsby? Prince William would never take a security risk like that.

Is the debate still out on this one? I think he's supposed to be a crab because he's crabby, but he looks more like a lobster. And it bothers me.

King Triton is the worst father ever

In fact, he reminds me a lot of Jim Bob Duggar: Overprotective of his zillion kids, he named them all using the same first letter, and he's way too interested in his daughter's love life. Also, in his hurry to breathe down Ariel's neck, he pretty much neglects the rest of his family, and after that opening number we hardly see them again for the rest of the movie. Someone should probably call CPS.

Also, why is Ariel the only redhead in her family? Something's up.

For somebody who spends so much time on land, Scuttle doesn't know a ton

This guy is the expert on humans and spends his days flying around and watching them use their human objects and then incorrectly identifies a pipe and a fork. Okay, Scuttle.

Also, why is Ursula even the villain?

Like, what did she do? Clearly, she's been banished from King Triton's kingdom, but why? As a little kid, it was easy to accept that the big, scary octopus was a bad guy. Now? Not so much. Maybe Disney will make a Maleficent style Ursula movie? That would be awesome.

When you forbid a 16 year old to do something, that will immediately become the thing they want to do most. Can we send this guy to a parenting seminar? I feel like if he would've loosened the grips a little this whole issue of Ariel dealing in black magic could've been avoided.

Merpeople have a skewed view of humans

They're right on that we're barbarians, but Ariel's got it wrong — we definitely reprimand our daughters. Ask me how many times my parents took my internet access away in high school.

I need to know what kind of lipstick Ariel is using

That girl is constantly in the water, but her makeup is flawless. Teach me your ways!

She singlehandedly saved the life of a man who will someday be king. She pulled him out of the water and saved his life. And she's 16! Please tell me one more time how this movie is a slap in the face to all feminists.

But that doesn't mean she doesn't need to find her chill

Homegirl swims back to her palace and immediately starts doing the whole "he loves me, he loves me not" thing on a flower. Sweetie, I know you like him, but you met once. And to think today's women are afraid to scare a potential love interest off with a double text.

He may be crabby, but Sebastian makes good points

Why not stay in the ocean, free of famine, war, and student loan debt? Sounds like a place I wanna be.

"Eric. Run away with you? This is all so sudden."

I'd totally judge Ariel for talking to a sunken statue like that, but then I realized it's exactly how I act every time I see a cardboard stand up of Harry Styles.

There's a lot here modern Disney could never get away with

Pair people up who have to convince the other person to fall in love with them in three days, or else they get tossed in the ocean. I'd watch it.

I'd trade my voice for those legs

I really would. Ursula, call me. On your shell phone. Get it? I'm so sorry. I'm done.

Did any of us not brush our hair with a fork after watching this movie?

If you say you didn't, you're lying. And I may or may not have just did it again right now for old time's sake.

Let's examine the decisions he's made in this movie. We know Ariel's a sweetheart, but he doesn't. As far as Eric's concerned, some random girl washed up naked on the beach and he thought it'd be a good idea to ask her inside, feed her dinner, and let her sleep over... with the thought that maybe he'd marry her 24 hours later. WHAT? Or maybe I just described The Bachelor. Who knows?

I'm wondering how my boyfriend would feel if I suggested this as the theme when the topic of engagement photos comes up in the future? It would be precious.

Ursula is the OG slut shamer

Did you seriously call Ariel a "little tramp" because she got in a boat and almost kissed a guy? I need to take a break.

The ending (and the movie itself) might be super unrealistic...

But it's still just as wonderful 25 years later. Thanks for the best childhood ever, The Little Mermaid — and I can't wait to share my favorite Disney movie with my future kids someday.