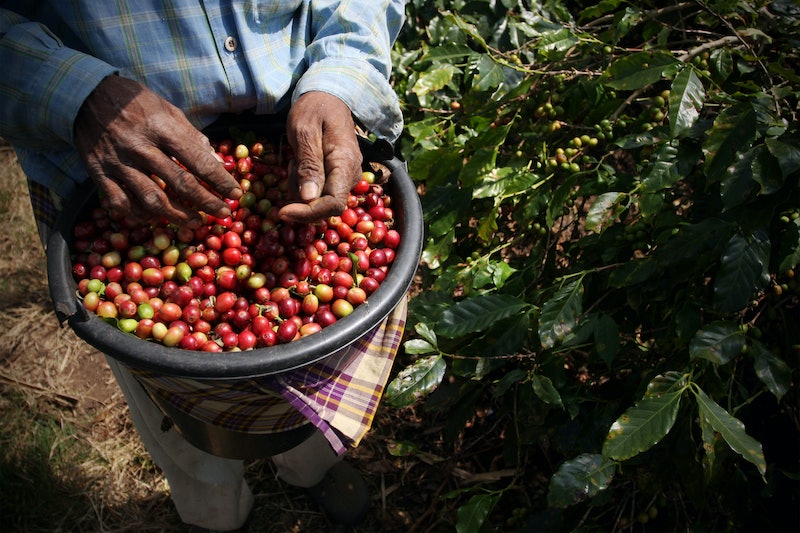 If images of homeless polar bears don't move you to act on climate change, consider this: climate change is killing our favorite foods, and it will only get worse. Exponentially increasing temperatures and CO2 levels mean that several food systems are being threatened and very soon we may have to cut back on some of our favorite foods, or live without them entirely. The Guardian's Twilight Greenaway (also managing editor of Civil Eats) provided a handy list of eight of the most popular foods currently threatened by climate change: corn, coffee, chocolate, seafood, maple syrup, beans, cherries, and wine grapes.

No offense to the polar bears; I care deeply for them and other animals dying or losing habitats as a result of increasing temperatures. This, however, hits home. It hits home hard. Could news of the negative consequences of climate change on food production awaken the deniers who are hesitant to act on climate change — those who may rely on a morning cup of coffee or glass of wine? For those of us in the countries that are most responsible for climate change — the U.S.A., China and the European Union — perhaps a tangible loss will shock us into action.

President Obama has just struck a historical climate change deal with China that requires the United States to decrease climate pollution by 28 percent from 2005 levels by 2025. This will require substantial work on climate change policy by his successor. A variety of polls show that most Americans have come around to the idea that climate change is occurring, and support candidates for public office who will support green policies.

Republicans like Senator Mitch McConnell have expressed concern that the deal will cause job losses and criticized the president for leaving the work of the sweeping deal to the next president, regardless of party. Senator McConnell, I ask you this: Do you drink coffee during those long hours? Do you enjoy a good corn on the cob at family BBQs? Do you partake in a chocolate bar to reward your hard work from time to time? Well sir, take a long hard look in the mirror. We know that President Obama would really miss coffee.

As is often the case, it is lower income people who would disproportionately suffer these losses, not the wealthy (and most elected officials are doing okay financially). Most of the losses would increase prices to buy the same luxury products. The research and data are compelling, and Greenaway succinctly connects climate change to an increase in price of some of our favorite foods, or at least to limited access to them.

Wine grapes, for example, will likely become more expensive and difficult for growers to maintain. Australian grapes appear to be in the gravest danger, with 73 percent of land becoming unsuitable for growing by 2050. Similarly, California's loss will be around 70 percent. Cacao beans, the main ingredient in chocolate, will also suffer in increasing temperatures. Higher temperatures and diminished water supply will hit big growing countries like Ghana and Cote d’Ivoire (and of course reduce income of the farmers who grow them). Andrew Jarvis, Leader of the Decision and Policy Analysis Program at the International Center for Tropical Agriculture said in a statement that wine items like wine, chocolate, and coffee are not crucial for survival, they measuring impact of climate change by their loss makes sense, and helps people understand long-term effects.

Imagine waking up and not having coffee to get you through the morning, or not having a bar of chocolate readily available when you get a craving. It’s not that there won’t be any, but the prices will likely be much higher. Both these crops are very sensitive to climate change, and increases in demand are outstripping our capacity to supply.