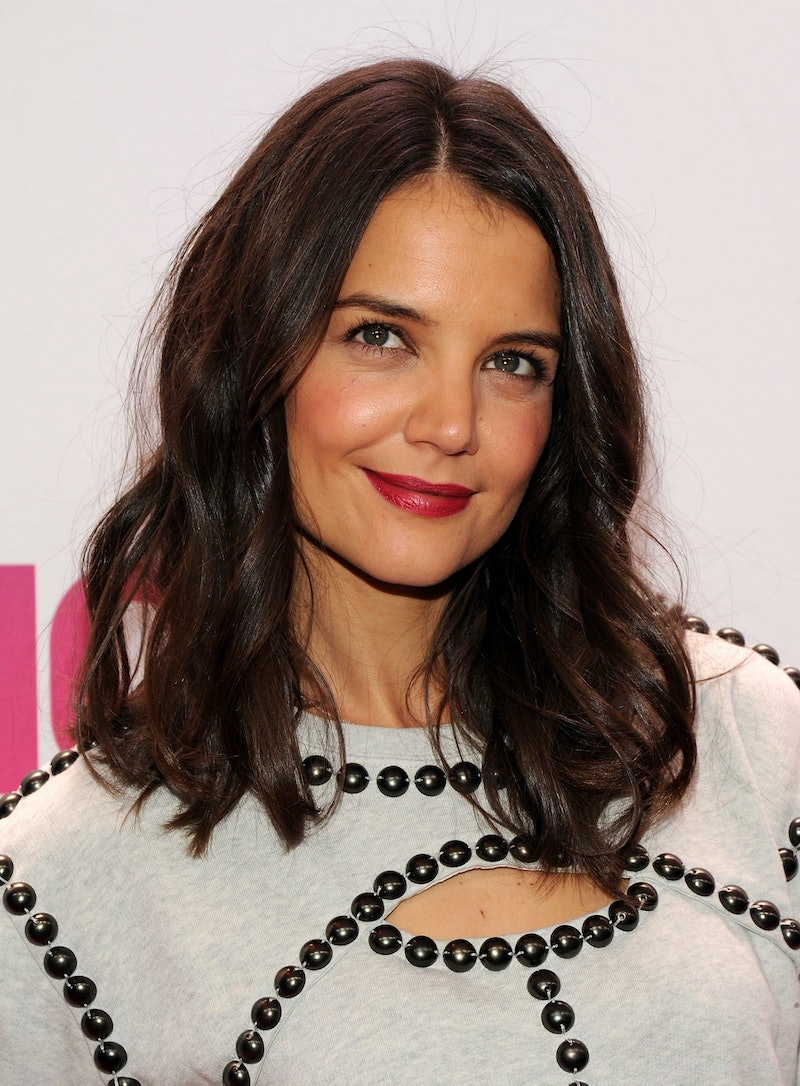 Since divorcing her former husband Tom Cruise in 2012, Katie Holmes has been out and about happily living her life with her young daughter, Suri. Making a comeback to Hollywood in films like Miss Meadows and The Giver, we’ve all seen a lot more of the 35-year-old actress in recent months than we have in a long time, and it’s been fantastic. Similarly, it looks like the celebrity herself has enjoyed being back in the spotlight after making an appearance at the Apple Store in Soho this week to take part in a Q&A for her fans. The best part about it? Katie Holmes admitted she still keeps in touch with the Dawson’s Creek cast, making all of our dreams come true.

Yet for some reason, all of this sounds so familiar, doesn’t it? Well, that’s because this isn’t the first time (and probably isn’t the last) that Holmes and the rest of her former castmates have hinted at a possible Dawson’s Creek reunion that eventually never happened. And even with Holmes' casual comments about how she still connects with her Dawson’s Creek friends, I just wonder when — if ever — a reunion will occur. The cast just seems to keep teasing it, and then...nada. Seriously, the hints have been endless:

If it hasn’t already been obvious, Holmes seems to really want this reunion to happen. Speaking to Gossip Cop in September, the actress appeared to hint that she understands the nostalgia behind the show’s cast coming back together.

“It was innocent at a time when innocence was very valued and present,” Holmes said. “But it had that teen angst that really revealed what everybody was going through. Maybe we all want to feel those feelings again. I don’t know. Maybe that’s why they want a reunion.”

Oh, Katie, don’t pretend like you don’t want that too.

Once upon a time, Jackson told The Hollywood Reporter that a Dawson’s Creek reunion show might be possible, though he said it probably won’t happen for a while.

“Never say never,” Jackson said. “If I’m out of work for enough years, absolutely. We’ll be old and gray and nasty by the time (that happens).”

Yet despite his hopes for a return, the actor also made this interesting point: “I feel like this is the number one question that we get asked,” Jackson said. “Nobody’s producing it, nobody’s writing it, it’s just something that comes to press.”

I guess he’s right, so it looks like we need to find someone to get on this ASAP! Don’t worry, it’ll happen. Hasn’t he ever heard of fan fiction? Clearly we’ve got this all under control.

Even though (SPOILER ALERT) William’s character Jen Lindley died during the series finale, the actress told Ryan Seacrest that she’d be ecstatic to be back with all of her castmates to film a reunion episode. She even joked that she’d be willing to return as a ghost in the show if she had to.

“[James Van Der Beek] has my email!” Williams said. “He has my home phone and my cell phone, so we talk. [James] could totally ask! I’ve always said, I’m totally up for reunion tours, reunion shows, so we can do that.”

A Dawson’s Creek reunion wouldn’t be anything without its main character, but good thing for the show’s fans, Van Der Beek hasn’t been opposed to the idea. In fact, in 2012, the actor wanted to invite the cast to participate in the season premiere of his show, Don’t Trust the B---- in Apartment 23.

“We have a big season premiere episode that’s dealing with James potentially trying to do a Dawson’s reunion and his version of what that would look like,” the show’s creator, Nahnatchka Khan said, including that she’d love to see Holmes, Jackson and Williams.

So with that, can someone please put this whole reunion idea in action?