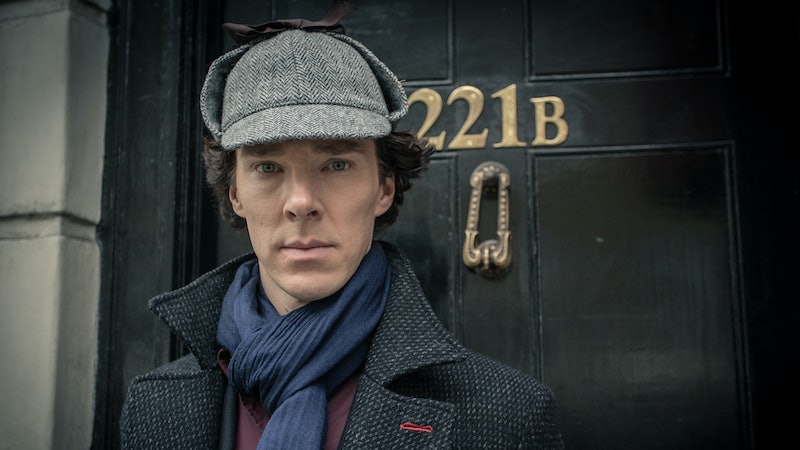 Benedict Cumberbatch is now so popular that he doesn’t have time for Sherlock, the show that made his name a household one. (And isn’t that a feat, considering that name is "Benedict Cumberbatch"?) According to Christian Today, Sherlock ’s fourth season will be delayed until 2017, due to Cumberbatch's hectic schedule of movies and breaking the Internet.

Because the television show is so deeply rooted in the original Sherlock Holmes stories, it is in those stories we'll find the clues for plot lines yet to come. It's elementary! And with my in-depth understanding of the Great Detective oeuvre and the inner workings of the BBC (I watch a lot of Masterpiece Mystery), I am 100 percent confident that I know what’s coming up, delay or no delay. And, unlike Benedict, I’m ready to share ASAP. I am also, like Benedict, willing to sport a deerstalker.

So here you have it — my outline of what to expect from the season to come in the not-so-near future, inspired by the words of Sir Arthur Ignatius Conan Doyle. I've pulled out the key passages that I think foretell the plot and I've interpreted them to fit both Sherlock's dramatic structure and modern setting. It's dark and twisty, no one is whom he appears to be, and not of it actually makes any sense. Stay tuned.

Episode One: The Final Valley of Fear Problem

“There should be no combination of events for which the wit of man cannot conceive an explanation.” —From Conan Doyle's novel, " The Valley of Fear

Scene: The episode opens with Sherlock dressed a woman, and quelle surprise, he’s really pulling it off. He’s at the nail salon getting a pedi, sitting next to Mary Morstan, who is super-preggers. He reveals himself to Mary, who asks, “Are you on a case?” “No,” he says, “I just like pedicures.” They waddle in plastic flip-flops toward Baker Street, both with black coats billowing in the wind. Music rises. Open credits.

Scene: Holmes and Watson stand over a dead character actor artistically dumped in a surprisingly tidy back alley. Words float in the air; “Murder. Sandwich. Twenty-seven. Ipswich.” Watson gives Holmes this deduction; "He's super-dead." Holmes finds a new way to tell Watson that he’s an idiot, kicks the character actor who says, “Ow.” Holmes grabs him by the hair. “Where can I get a good sandwich in Ipswich?” Character actor stutters, tells him. Holmes dashes off with Watson, befuddled, on his tail.

Ipswich pub. Sherlock and Watson are eating sandwiches. They look pretty good. Watson: So you want to tell me where you’ve been all this time? Holmes: A little Shakespeare, a penguin movie, killing it on late night television.Watson: Even though Moriarty was supposedly planning world destruction at the end of season thr-, cough, three years ago?Holmes: Once again you prove yourself completely ignorant of the basic facts that are staring you in the face.Watson: You’ve got an explanation, then, for the sandwiches, the disappearance and the mani-pedis?Holmes: Damnit Mary. I knew she couldn’t keep her mouth shut. Watson: What’s going on?Holmes: The murderer was potatoes, John! The murderer was potatoes! Leaves abruptly.Watson: Stop doing that! Exits.

'He [Moriarty] is the Napoleon of crime, Watson. He is the organizer of half that is evil and nearly all that is undetected in this great city. He is a genius, a philosopher, an abstract thinker. He has a brain of the first order.' —From Conan Doyle's short story,"The Final Problem"

Scene: Jim Moriarty and Sherlock sharing a plate of chips (the British kind). No one speaks. They just stare, intently, with their angry, thinking eyes. Suddenly they both start flinging chips at each other. Ketchup is flying everywhere. Music Swells. Blackout.

Scene: 221B Baker Street. Mrs. Hudson is cleaning brains off the wall (“You boys!”) while John starts working on his screenplay: Sherlock: The Movie. John mutters, “Only damned way to get Cumberbatch to commit is put him in the bloody cinema.” Holmes enters, drenched in red stuff. “It’s only ketchup, Mrs. Hudson!” To John; “Requisite subtle reference to original Conan Doyle series! He’s stained me, Twice!” Holmes then flings himself face down onto the sofa and says he’s bored. 221B Baker Street explodes. End of Episode.

“But I have heard, Mr. Holmes, that you can see deeply into the manifold wickedness of the human heart. You may advise me how to walk amid the dangers which encompass me.” — From Conan Doyle's short story "The Adventure of the Speckled Band."

Scene: Episode two opens on John Watson playing guitar in his new band that he started with some dermatologist friends; The Speckles. Get it? Cut to: Sherlock running down a busy London street in slow motion, black coat billowing behind him. Some ominous grey clouds behind him, you know, just to mix things up. Cut to: Moriarty laughing hysterically. Cut to: Snakes on a Plane. Cut to: 221B Baker Street Explodes. End of Episode.

“Education never ends, Watson. It is a series of lessons, with the greatest for the last.” —From Conan Doyle's short story, "His Last Bow."

Scene: An hour-long slideshow of Benedict Cumberbatch photos next to the otters he resembles most. Set to, I kid you not, Etta James.

More like this
'Doctor Strange 2' Star Benedict Cumberbatch’s Net Worth Is Not An Illusion
By Hugh McIntyre
Remember When Benedict Cumberbatch Announced His Engagement In A Newspaper Ad?
By Hugh McIntyre
Michael & Kathleen Peterson’s House From ‘The Staircase’ Has New Owners
By Kadin Burnett and Kayla Blanton
Conversations With Friends' Endometriosis Scenes Are As Brutal As It Gets
By Ivana Rihter
Get Even More From Bustle — Sign Up For The Newsletter