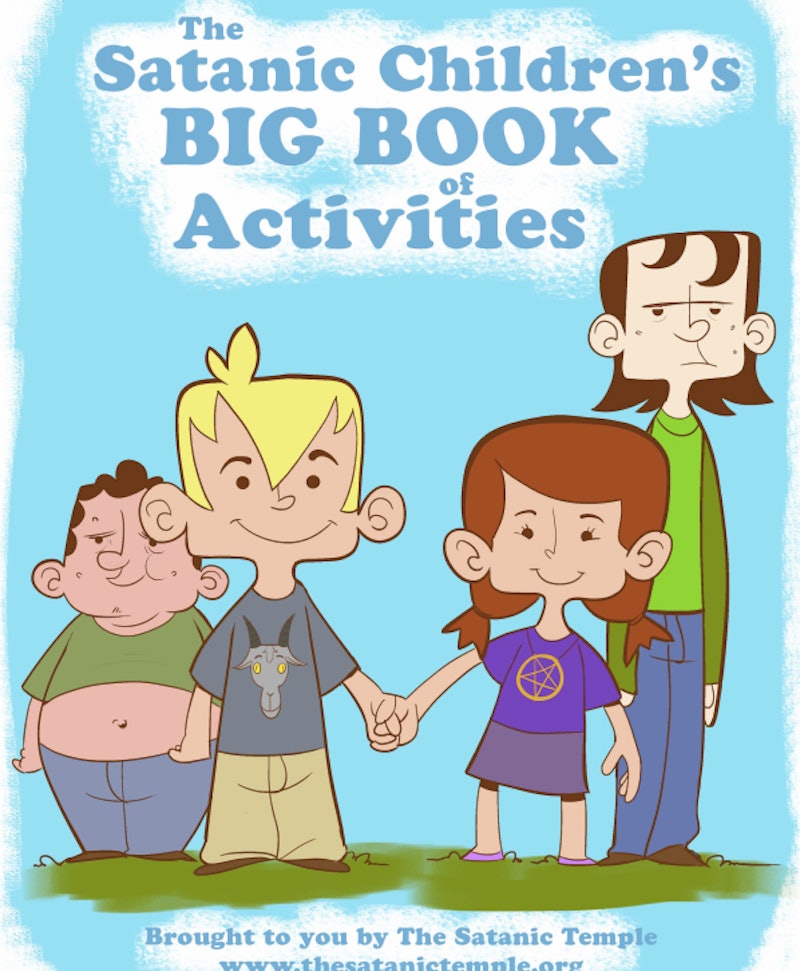 In the ultimate calling-your-bluff move, a Satanic group is handing out Satanic coloring books to schoolchildren. The move is meant to challenge the current policy in Florida schools that allows for the distribution of religious materials. The present rules permit evangelical Christian groups to hand out Bibles, and have also ok-ed atheists to provide their own materials to interested students. But now that the Satanists have gotten into the action, the Florida school district is reneging on its word.

Speaking with MyFox Orlando, school board chairman Bill Sublette noted, "Religious instruction really belongs in the home, not in the schools." While Sublette initially allowed various religious groups to set up stations around the 18 high schools in his district, the advent of this new, Satanic organization has given him pause. According to Sublette, the "process was abused. We tried to have an open forum but it was becoming disruptive to our educational environment."

The Satanic Temple’s Lucien Greaves, the organization behind the coloring books, released a statement in which they said that the current policy served as "a transparent attempt at giving exclusive privilege to an evangelical group." So in order to challenge the hypocrisy, they decided to create materials of their own, bringing satanism to the masses by way of a rather nondescript and, dare I say it, innocent coloring book.

They released the 10-page coloring book for public consumption on their website, and it includes a number of classic children's activities, including word searches, scrambled words, mazes, and find-the-difference photos, all with a Satanic twist.

Of course, the school board's response, while not unexpected, certainly highlights the double standard that is applied to "acceptable" religious practices and those deemed too outlandish to be tolerated, particularly on school property. School Board Member Christine Moore told a local news station, "Everyone's upset about the Satanists and the atheists coming." On the other hand, Christian groups have been welcomed with other arms because "The Bible will open somebody's heart, somebody's mind, and cause them to pursue answers." The same is not believed of seemingly anti-religious groups.

The school board began considering a policy change following the national attention the Satanist group has received in their distribution efforts. Sublette told a local Fox News outlet, "In my office alone I had received close to 11,000 emails in one period on this issue, and it gives you an idea of the level of disruption it was causing." But a spokesperson for The Satanic Temple has fired back, claiming that disruption is by no means a reason to ban sharing of information, particularly considering the religious freedom various Christian groups have received. Doug Mesner, co-founder and spokesman for The Satanic Temple, told the Orlando Sentinel that the new decision to try to stymie Satanic voices "strongly implies [the school district] never intended to have a plurality of voices."

Mesner, who also goes by Lucien Greaves, further noted, "It’s laughable and infuriating at the same time to hear the “World Changers” now crying that an inability to distribute their materials exclusively is discriminatory against them," referring to the Christian groups who have expressed frustrations that the Satanists are now ruining the fun for everyone.

Some Christian activists, however, believe that there is a way to ban the Satanists from handing out their coloring books while continuing to provide their own biblical materials to students. Roger Gannam of the Liberty Counsel told Fox News, "The Bible distributions are a good thing. They haven’t caused any problems. But now by creating controversy [the Satanist group] is maybe perhaps getting what it wants," suggesting that the best response would simply be to ignore them.

Nanette Parrattl-Wagner, a parent of a local student, added, "[The school board] has adopted a strategy of all or nothing, and even though the attorney says it’s the only option they had, there are other legal opinions that I’ve personally found with local and national attorneys." It is unclear what these legal opinions are and how they will be pursued, but it certainly seems that the battle over religious turf in Florida schools has not ended.

Sublette told Fox News, "The new policy, if it passes, it still needs to go before the board, will prohibit the distribution of any religious materials in our schools." In the meantime, the school district has suspended all distribution of religious materials as it is possible that the policy will change. "Given that there's a potential change in the policy, we won't be allowing distribution," District counsel Woody Rodriguez told WPTV. The vote on the issue, however, will not take place until early next year, and until then, the Satanists and the Christians may be having their own war of words over their distribution rights.