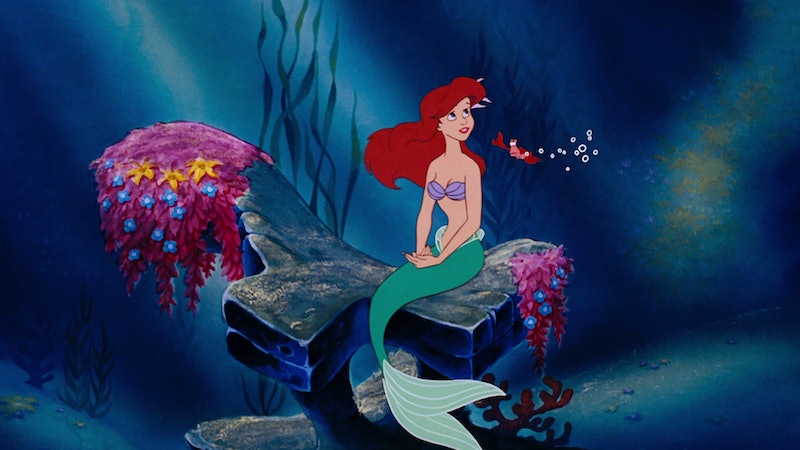 A lot of really great things happened in 1989. It was the year that inspired Taylor Swift to create the best album ever. It may or may not have been the year that I was born. And most importantly, it was the year that The Little Mermaid came out, spawning generations of kids who would live to don fins on Halloween and dozens of memes of Hipster Ariel. And it's a beautiful thing.

The Little Mermaid has always been my favorite movie, since the time I woke up on Christmas morning to unwrap my Ariel and Eric dolls (in their wedding outfits, duh) and refused to open the rest of my presents because those were the only ones that mattered. Ariel plays a big role in the lives of a lot of kids, but as an adult, she's still pretty awesome. Headstrong and absolutely fearless, she's a champion for anyone who's ever felt like they don't fit in. Even if you feel like you don't belong under the sea, there's a place for you on land if you're daring enough to trade your fins for legs.

There have been many princesses who have come after her, and I have loved them all. My cats are named Rapunzel and Flynn after the characters in Tangled, and I'm still carrying a torch for Frozen, even a year later. But no matter how much Disney royalty will exist between now and the time I have kids to share my favorite movies with, Ariel will always be the reigning best princess ever, and the rest of the gang should bow down to her. Yes, even you, Cinderella.

She is everything I aspire to be

Brave, beautiful, and never backs down, not even in the face of grave danger or the fear of becoming one of those shriveled up soul things Ursula keeps in her creepy ass cave. Ariel is flawless.

She faced the scariest Disney villain ever

If you haven't watched The Little Mermaid in awhile, do it, and you will understand why I still have nightmares about Ursula. Not only is she scary as hell, but she does magic, and at the end of the movie she becomes, like, 500 feet tall. Without the triton, you are powerless against Ursula, especially when she's in the mood to steal your man. And have you seen that face she makes when she's electrocuted to death? I will never look at an octopus the same again.

She put up with Prince Eric

I am a huge fan of Ariel, but I hate Prince Eric. He's kind of a drip. First, he falls in love with a random girl who washes up on the shore by his house, and then the next day decides to marry another random girl because he likes the way she sings. Who does that? But somehow, Ariel manages to dig up his redeeming qualities and put up with him so no one else has to. Thanks for taking one for the team, girlfriend!

She has the best hair

Redheads are the best, and I'm not just saying that because I am (a fake) one. Also, she has the best outfits. I mean, aside from her rockin' bikini top and fins, she wears an assortment of adorable dresses, which isn't true for many of her princess peers. There's the pink dress, and the wedding dress, and the blue "Kiss the Girl" dress, and the sparkly dress from the end of the movie. I want her closet.

She's the only non-human princess

I mean, unless you count Tiana, who turns into a frog for a minute.

And her facial expressions are AMAZING.

Her music is the best

How do you top the true excellence of "Part of Your World?" You don't — not even with Frozen's "Do You Wanna Build a Snowman," which comes in as a close second.

She finds a way to be eternally optimistic

Her dad's trying to keep her from growing up, she's in love with someone who's not even the same species as her, and she has the most annoying group of sisters I've ever seen. But rarely do we see Ariel without a smile on her face, ready to take on the next challenge — which is usually figuring out how legs work.

She appealed to a huge audience

Yeah, The Little Mermaid is pretty girly, but there's something for everyone. Shark chases, shipwrecks, delightfully stupid seagulls — who wouldn't love this movie? The moment I fell in love with my boyfriend was the moment he told me that, as a little kid, his grandmother bought him an Ariel doll and he was never seen without it. Everyone loves The Little Mermaid. Everyone.

Her merch is the cutest

And I want it all.

Yeah, I'm a little pissed that Melody inherited her father's hair instead of her mother's fiery mane, but that's fine, because she's totally adorable and The Little Mermaid 2 was nowhere near as terrible as Pocahontas 2, which I choose to pretend never existed.

The Grimm version is pretty badass, too

In the original story, Ariel feels like she's stepping on shards of glass every time she walks on her new legs, and she has to kill Eric to stay human. Since she loves him, she obviously doesn't kill him, so instead she turns into sea foam. And that's the end of the story. If Ursula isn't enough to give you nightmares, this ought to do it.

She has the best sidekicks

Three, to be exact — Sebastian, the narc, Flounder, who's endlessly lovable, and Scuttle, who's kinda stupid but endearingly so. And each of these characters are more fully formed than most Disney sidekicks, and they get the most screentime. And I love them.

But instead of sneaking out of the house, she sneaks out of the ocean. Mad props, girl.

Look at this girl!

Her castle at Disney is the best

If you haven't been recently, you need to go. It's a cathartic experience. By the way, that lady is Jodi Benson, and without her, Ariel would not be the best princess.

And so is her ride

I always get goosebumps, and end up hopping right back into the clam mobile for round two.

And did you know you can buy these?

It's a dinglehopper that serves as an actual hairbrush, guys! If you need this, you can buy it here. Don't worry, I already have one.

And speaking of dinglehoppers...

She even comes with her own lexicon. Who can tell me what a snarfblatt is?

Brushing your hair with a fork, splashing around in the pool as you singlehandedly reenact "Under the Sea" — what's not to love?

And I still pretend to be her as an adult

Every time I take a bath, I can't help but blow bubbles into the air and wiggle my legs like I'm amazed they exist. I know, I know. I can feel you judging me through the computer screen.

The prince is just a footnote

The uninitiated may see The Little Mermaid as a love story, and they're right, it is — just not between Ariel and Prince Eric. The true love story here is between Ariel and land. She wants to be where the people are, and she would have traded her voice for legs with Ursula even if Eric hadn't existed. The story isn't about Ariel giving up the life she knew for a man she just met. It's about fighting for your dreams, even when the odds are against you. And love always wins.

Watching the movie just gives you that magic feeling

You feel all sparkly and good inside, because that's what The Little Mermaid is.

"Kiss The Girl" is the best scene in any movie ever

It's just so perfect and adorable. I grew up praying my first kiss would happen in a boat, surrounded by fish and marsh creatures who were conveniently serenading me. Spoiler alert: It didn't, but to be fair, neither did Ariel's.

She made being a fish out of water cool

Feel like you don't belong? That's OK — that just means you're special. And we fish out of water, my friends, are the lucky ones.