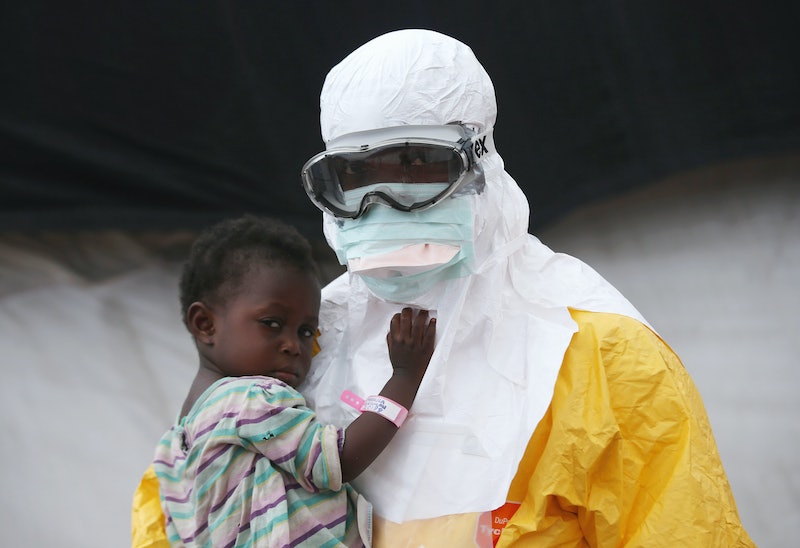 With the United States' brief, tiny Ebola experience now well-understood and apparently entirely under control, it's easy to lose sight of just how much work still needs to be done to actually end the crisis. The harrowing Ebola outbreak in West Africa is still ongoing, after all, despite slow and steady signs of improvement in recent weeks, and continues to draw diligent attention from international aid organizations and wealthy philanthropists alike. But Sunday brought some encouraging news — Liberia has set a national Ebola goal of no new cases by Christmas.

If they actually manage to meet this goal, it'll be an enormous milestone in this ongoing public health crisis. Until the virus' spread from infected people to the healthy is halted, there's no way for health authorities to feel confident they've truly got a handle on things. While Ebola is thankfully not transmissible through the air, and requires direct contact with the bodily fluids of a symptomatic sufferer for contraction, the health infrastructures in three badly stricken West African nations — Liberia, Sierra Leone, and Guinea — proved insufficient to contain the crisis on their own.

Of those three, Liberia has undoubtedly been hit the worst by Ebola, with both the highest number of infections and deaths in the region (6878 and 2812 respectively, according to the Centers for Disease Control). In short, if Liberia can hold the line against Ebola, it's a fantastic indication for things going forward.

Liberian President Ellen Johnson Sirleaf committed to the timeline in an address Sunday, during which she also announced the removal of the country's Health Minister. Sirleaf's administration has absorbed a lot of criticism over their handling of the outbreak, so this kind of administrative shuffling isn't too surprising. Sirleaf reassured that the change in personnel wasn't going to deter the efforts.

Dr. Gwenigale, who continues to have my full confidence, will continue to serve as adviser in the Ministry of Health and will continue to work with me on the presidential advisory Ebola committee until his planned retirement in February. ... We continue to combat the Ebola virus and strive to achieve our national objective of zero new cases by Christmas.

Liberia has seen some cautious optimism in recent weeks, with news that the rate of new Ebola infections was slowing, a turnaround from what the World Health Organization (WHO) characterized as an "out of control" situation during the summer. Of the utmost importance, however, is that that people within high-risk West African states don't ease off at all on fighting the outbreak as conditions improve — as WHO assistant director-general Dr. Bruce Alward warned in October, "These are wily viruses. They are waiting for you to make that kind of mistake."