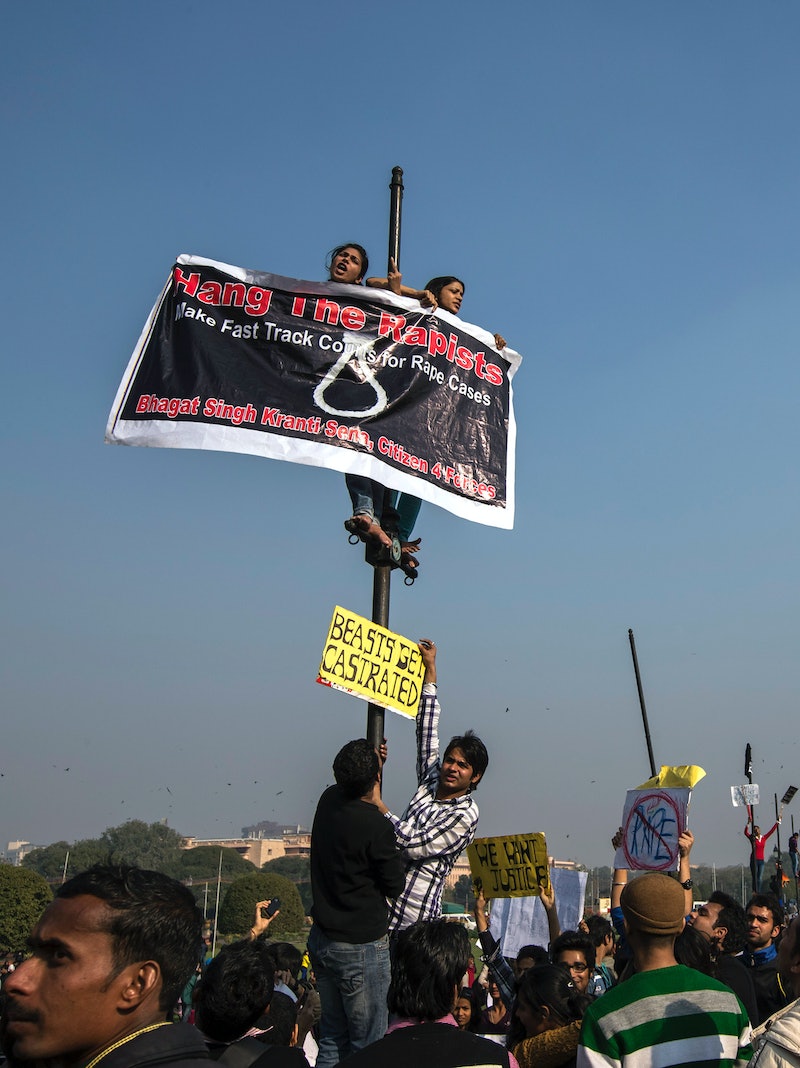 Four men were convicted Tuesday of the brutal rape of a 23-year-old woman in New Delhi, who died 10 days after the attack due to massive internal injuries. But to many in India, the case's verdict is less important than the perpetrators' punishment. Prosecutors asked for the death penalty for the four men Wednesday, the sentence long sought by the victim's family and many Indians who were outraged by the case.

"There can be nothing more diabolic than a helpless girl put through torture," said Dayan Krishnan, one of the prosecutors, as arguments began in the trial’s sentencing phase. Krishnan argued that society would be outraged by anything less than the death penalty, saying, "The common man will lose faith in the judiciary if the harshest punishment is not given."

The wish for Mukesh Singh, Vinay Sharma, Akshay Thakur, and Pawan Gupta to receive the death penalty has been expressed by protestors across the country, as well as by the victim's family and by the victim herself, before her death.

"These men should be hung until death, because they don’t deserve to live in our society," the victim’s mother, Asha Devi, told a news channel Tuesday night.

Indian news services also released partial text from a statement made by the dying woman to the police, asking that her assailants be put to death as a deterrent to other potential rapists. "They should be hanged, so that such an incident does not happen with another woman," the statement read, according to text provided to the news service IANS. "They should be burned alive."

The Indian government has responded to the outcry by amending the criminal code so that the death penalty, which is legal but rarely used in India, could be exercised in particularly brutal cases of rape.

The woman, a physiotherapy student, boarded a private bus that a group of men, who the police said had been drinking, were also riding. She was on her way home from a movie with a male friend, and the men assaulted both, knocking the man unconscious and raping the woman in the back of the bus, sometimes using a metal rod. The two were dumped from the bus, naked and bleeding, and the woman died two weeks after from her injuries.

Prosecutors have argued that all the men are equally guilty, even though a fifth man, Ram Singh, perpetrated the most brutal part of the attack. Singh was found hanged from a sheet in his prison cell in March.

The defense argued for leniency, saying the sentence should take into account that some of the defendants, although present, did not take part in the most brutal parts of the rape.

"The court must bear in mind that life imprisonment is the rule and the death sentence is the exception," said V.K. Sharma, the lawyer for one of the convicts.

After listening to both sides, Judge Yogesh Khanna said he would sentence the four men Friday afternoon.