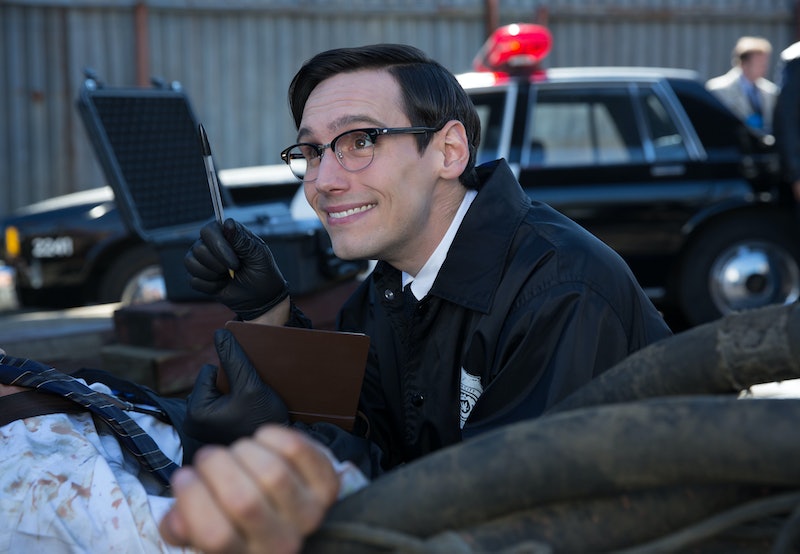 Gotham, Fox's new Batman show without Batman, seems to have finally hit the right note with its weird campy darkness. Now that the show has found its groove and we're deeper into the first season, fans want to know how long it will take to see the myriad of characters introduced become the villains we know and love. Especially Edward Nygma the dorky, arrogant coroner and forensic scientist for the Gotham Central Police Department. Will Edward Nygma become the Riddler on Gotham anytime soon?

During the Television Critics Association's press tour, Gotham showrunner Bruno Heller made it clear that he isn't very interested in seeing all the characters introduced become outright supervillains. On the press tour he said:

...the really interesting parts of the stories are the origin stories. As soon as you're into the capes and the costumes, it's less interesting than how the people got there.

With all due respect, Mr. Heller, most fans are pretty tired of origin stories no matter what your ratings say; we're tuning to see the colorful cast of characters become the dynamic people we remember from the comics. At least I am. Maybe fans should start to worry if we'll ever see Nygma or any of the other characters as their super villain alter egos.

Thus far on Gotham, Nygma has been a good guy. He's a bit too smart for his own good with a hefty dose of arrogance and a dash of dorkiness. Even though he seems to be far removed from the villainous Riddler we've come to enjoy in the comics and animated series, the writers are definitely hinting at his future incarnation.

Like his comic book counterpart, Nygma is highly intelligent, loves riddles and puzzles, and has a bit of superiority complex. In an interview with Hitfix, Cory Michael Smith (who plays Edward Nygma) said:

Everyone knows him as The Riddler, which he will eventually become, but it's like 'Let's start as far away from that as possible. It's more interesting and it's certainly much more fun for me and the writers. So we wanted to capture his joy in working on the good side and his joy in understanding crimes and investigating crimes and being a forensic scientist.

So, basically we can expect a lot of foreshadowing. The writers are going for a slowburn with Riddler. There's nothing in the foreseeable future that tips Nygma from being a helpful, if somewhat annoying, forensic scientist working for GCPD to a criminal mastermind. Unless he decides being a good guy isn't enough of an intellectual challenge, I think he'll need a bit more of a stimulus to join the dark side. In the comics, Riddler is a criminal mastermind who is as interested in money as he is the challenge of outsmarting The Dark Knight and anyone else in his way. And that begs the question, how will Gotham pull off revealing these villains when their origins and greatest battles are so tied to Batman himself? The task isn't impossible, and at the very least, it will be probably be interesting to see the writers pull it off.

I know I have been pretty harsh on Gotham in the past. I'm only doing it out of a sincere love the characters and Batman's mythos. By being so focused on origin stories and nixing Batman from appearing on the show ever, the writers have put themselves in a tough position that brings up a host of troubling questions. How far will the narrative go? If there's no Batman on the show and the writers are obsessed with origin stories, will Gotham end up just being all foreshadowing with little payoff? Why should anyone be interested in Nygma's origin story if we never see him actually become the Riddler? Hopefully, we don't have to answer that question.Images: Jessica Miglio/FOX; puzzlingenigma/Tumblr