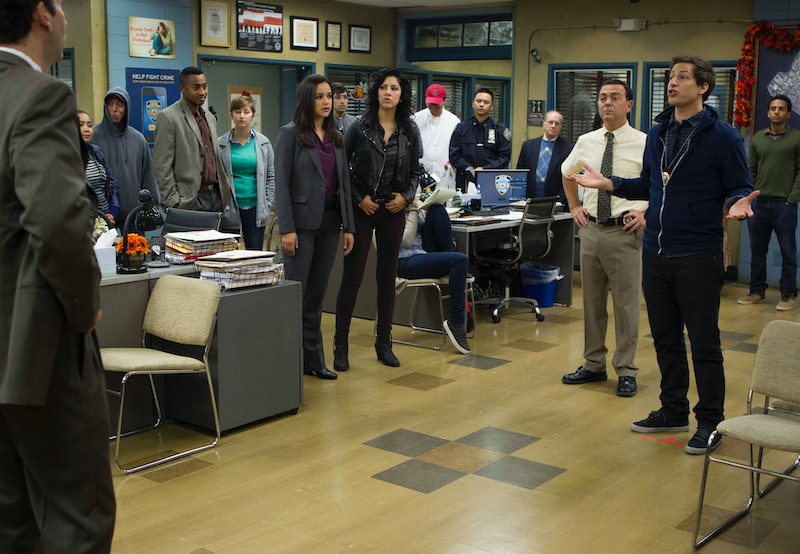 Let me just start this off by saying that I had extremely high standards going into the Nov. 16 episode of Brooklyn Nine-Nine . I expect a lot out of the show always because it is so consistently delightful. But when I heard it was the Thanksgiving episode, my expectations were through the roof.

A year later, and I still look back on last season's Thanksgiving episode so fondly. It was one of the best episodes last season because it truly allowed the members of the precinct to play off of each other and let it shine as the lovable, dysfunctional family that it is. There was also wonderful character development with a greater understanding of Jake's troubled past with his parents' divorce and Amy gaining some of that recognition from Captain Holt she so badly wanted. Plus, it gave me one of my favorite lines of the series when Captain Holt responds to a sad paper turkey supposed to be dressed up like a pilgrim: "Where's the buckle, Santiago?" Just thinking about the way Andre Braugher delivers this line brings a smile to my face.

So all of that means Season 2's Thanksgiving episode had big, buckled pilgrim shoes to fill. Did it reach that level? Well, not quite, but it makes you so glad for never experiencing a Thanksgiving like the one the 99th Precinct does in this episode.

The episode starts out with Terry and Captain Holt heading off to a charity event on Thanksgiving morning. The rest of the crew will leave at noon, leaving Jake in charge, since he loathes the holiday. Of course, Captain Holt is a bit wary of putting Jake in charge, because he hasn't proven to be the most responsible of the bunch (read: not responsible at all). But sometimes, you've got to work with what you've got.

Unfortunately, as is the case with sitcoms, things don't exactly go according to plan, which is not at all. When everyone is about to head out for their Thanksgiving celebrations, they discover a package with some mysterious white powder in it. Thinking it could be a harmful substance like anthrax, the precinct is put on lockdown with no one coming or going until they can be sure what it is. No one took the threat too seriously, that is until it proved to not be baking powder and could in fact be toxic.

During the episode, Jake, Amy, Boyle, and the rest of the gang had to keep everyone in the precinct happy and blissfully unaware of the gravity of the situation. This didn't just include the detectives, but also criminals, witnesses, and lawyers. Boyle learned the "Single Ladies'" dance from some women behind bars. Jake put on a big, tiger-print pimp coat when looking for some clothes to keep everyone warm. And might I add that the brief bit of screen time Jake had in wearing that coat was hi-larious.

But as much as they tried to keep the possible danger of the situation under wraps, one of the lawyers spilled that the detectives thought the substance could be anthrax. Everyone freaked out, but then Jake put on his big boy pants and took control of the situation. It turned out the chemical wasn't actually toxic, which turned out to be the best Thanksgiving news anyone could ever hear.

As I mentioned previously, there was some quick, laugh-out-loud gags in this episode. Unfortunately, it didn't come close to warming my heart like last season's Thanksgiving celebration. I would have thought putting nearly the whole precinct into one place together for an entire episode would have created better results, because the characters really are a family.

There was little in the way of character development here, and I think Thanksgiving episodes call for a bit of sentimentality. The only point made here really was that Jake can be a strong leader; he just needs to have more confidence. Thanksgiving is such a special time, and I think we could have learned that elsewhere in the season. But on the bright side, at least no one was hurt. Thanksgiving could have been so much worse for them.