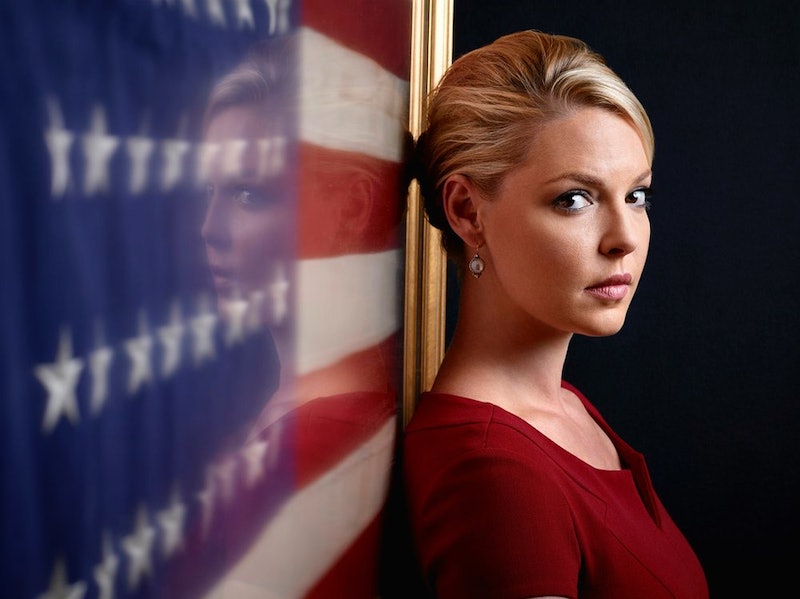 Katherine Heigl is going from being a leading lady on ABC's Grey's Anatomy and several rom-com feature films to being the president's right-hand woman in the new NBC political drama State of Affairs , premiering Monday night. This will be Heigl's first TV role since leaving abruptly leaving Grey's in 2010, after she and exec producer Shonda Rhimes agreed to part ways. The Emmy-winning actress returns to the small screen in State of Affairs as Charleston "Charlie" Tucker, a CIA analyst who is responsible for providing President Constance Payton (Alfre Woodard) with the daily briefing of the country's biggest threats to national security. And this isn't some made up on-screen — Heigl's job on State of Affairs is real, even if Charlie isn't.

Heigl's character is actually tied to the president by more than just the CIA — she was once engaged to the first son, who was brutally shot by terrorists. According to Zap2it, Heigl and her mom-manager Nancy have been trying to get the show's concept greenlighted for two years, but producer Joe Carnahan came up with the story for the characters that finally just clicked.

But while Charlie is pure fiction, the realism is there: Several D.C. consultants are behind the scenes and a few serve as inspirations that lend State of Affairs an authentic feel:

Before serving as the new NBC drama's executive producer, Faraon himself was a senior CIA analyst and produced the Daily Briefing for Presidents Bill Clinton and George W. Bush, from 1999-2001. The series is based on his experiences leading the team that produced that briefing.

"Our mission was to provide the best intelligence information to the President of the United States so that he or she can make the best informed decisions for the country," Faraon told ScreenSlam. "Getting it right, accurate and not screwing up — that was critical. And we beat ourselves up every day just to make sure we accomplished that mission."

The ambassador and former CIA spy now lends his expertise to State of Affairs as an exec producer and consultant. Crumpton served as a merciless key spy in Afghanistan right after the Sept. 11 attacks. In 2005, then-Secretary of State Condoleezza Rice appointed him as the State Department's coordinator for counter-terrorism. Today, he advises companies as CEO and founder of the Crumpton Group, based in Arlington, Va.

"The topics that are discussed and the people that are portrayed — they capture real events," he told NBC in a behind-the-scenes video.

The Reputation of the Briefing Itself

The CIA's Daily Briefing — known colloquially as "the book" — has developed a larger-than-life reputation since its inception in 1961. The document is "Top Secret" and shared mostly with the president's inner circle.

Former Bush press secretary Ari Fleischer once described the briefing as "the most highly sensitized classified document in the government." On the day of Sept. 11, 2001, Deputy Director Michael Morell recalls giving Bush the daily briefing, calling the day "uneventful" minutes before the attacks of the day occurred.

It sounds like audiences will get an insider's look at the CIA through State of Affairs.