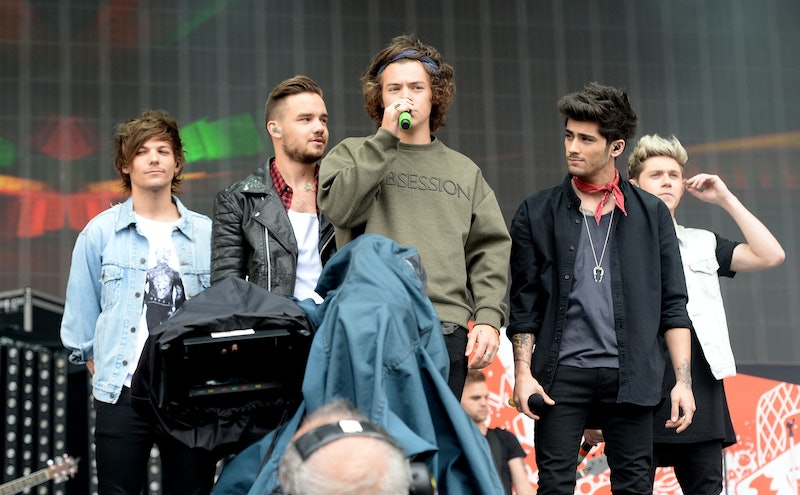 When I heard that One Direction's FOUR album was finally, finally out on Monday morning, I was pretty excited. FOUR was promised to be their best album yet and that's quite a tall order considering how well Midnight Memories went over. Of all the songs on the album, the one that resonated with me the most was One Direction's "Act My Age." I thought the deluxe album song would be an updated version of blink-182's "What's My Age Again," another anthem to being forever young at heart. And, in a way, that's what I got. However, One Direction added a romantic depth to that message that songs like "What's My Age Again" and Avril Lavigne's "Here's to Never Growing Up" lacked. The lyrics to "Act My Age" provide the one, true reason a person might want to stay young at heart forever — so their feelings for someone never fade.

The opening verse and chorus of the song start out misleading before getting to the crux of the song, what separates it from every other vaguely age-ist youth anthems out there.

When I’m fat and old and my kids think I’m a joke Cause I move a little slow when I dance I can count on you after all that we’ve been through Cause I know that you’ll always understand I won’t act my age, no I won’t act my age No, I’ll still feel the same around you

And it's really nice, says the girl who is counting down the years to thirty, to have a song about being young and wild and free that's actually about remaining young and true and fresh in your feelings for someone else. It's refreshing to have One Direction cheekily reference the trappings of old age — gaining weight, having children laugh at you, every movement being of great effort — and saying that even then you'll still be young as long as you have someone by your side. Even then, as long as you have someone you can count on, you'll never have to "act your age." The fact that all of this is sung over a Celtic-inspired melody that practically invites you to get up and dance no matter what your age is just a bonus.

As if that wasn't enough to charm me, there's also this bridge.

I'm sorry, are you telling me that I can throw an after party just by staying in bed with someone and talking until morning? Over the course of the song, I forget for a moment that even the oldest member of One Direction is younger than me because I'm melting into a little puddle of affection over how these boys have grown musically and lyrically. Sure, this particular song wasn't written by any of the boys themselves — instead being an offering acquired from songwriters Julian Bunetta, Ed Drewett, and John Ryan — but they do get a say in what goes on the album and the fact that they chose this song is good enough for me.

Besides, listen to it. You know which member of One Direction pushed for that Celtic melody.