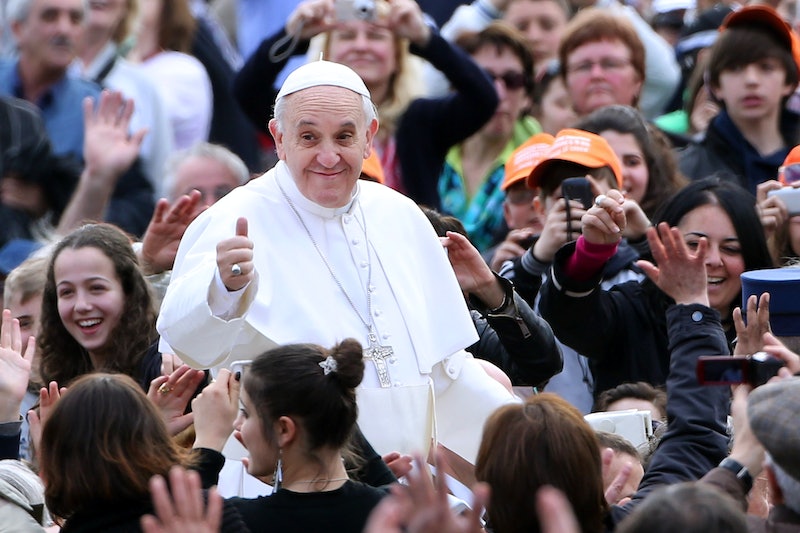 Rumor had it the Holy See was planning an American visit, and on Monday, he laid those rumors to rest: Pope Francis will travel to Philadelphia in 2015, becoming just the fourth reigning pope to step on U.S. soil. Francis made the announcement Monday morning while addressing a conference on traditional marriage, the Colloquium on Complementarity of Man and Woman, at the Vatican. Keeping with the family theme, Francis' 2015 visit will coincide with the World Meeting of the Families, which occurs in a new global city every three years.

Francis said in a brief statement on Monday, as quoted by Vatican Radio:

I wish to confirm according to the wishes of the Lord, that in September of 2015, I will go to Philadelphia for the World Meeting of Families. Thank you for your prayers with which you accompany my service to the Church. Bless you from my heart.

Vatican spokesperson Father Federico Lombardi confirmed Francis' upcoming U.S. visit. The pontiff, who hails from Argentina and so far during his papacy has traveled to Israel, Palestine, South Korea, Jordan, Albania and Brazil, has never visited the United States in his lifetime. According to the World Meeting of the Families, Philadelphia Archbishop Charles J. Chaput, as well as a delegation of organizers for the Philadelphia event, were at the Vatican for Francis' announcement. Chaput praised the pontiff's "charisma, presence and voice" in a statement on Monday, adding that he was "overjoyed" for Francis' landmark visit to the City of Brotherly Love:

As I’ve said many times before, I believe that the presence of the Holy Father will bring all of us — Catholic and non-Catholic alike — together in tremendously powerful, unifying and healing ways. We look forward to Pope Francis’ arrival in Philadelphia next September and we will welcome him joyfully with open arms and prayerful hearts.