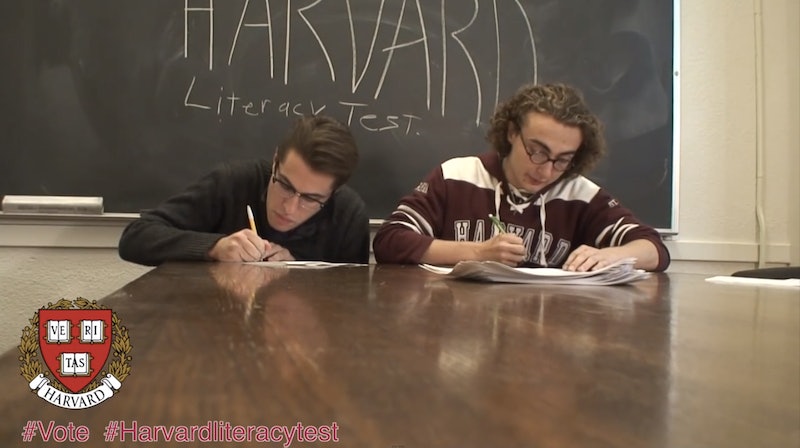 Prior to the passage of the Voting Rights Act of 1965, many states instated so-called literacy to hinder African-Americans from voting. Given to African-American voters who didn't have a certain education level, these tests were onerous and tricky — presumably devised to disenfranchise would-be voters instead of actually demonstrating a person's intelligence or ability. So, what's a better way to prove this long-held assumption than having Harvard University students take a voting literacy test — and watching them fail, terribly.

Literacy tests are a relic of the (not-so-distant) past, but voter suppression isn't. And with the Supreme Court decision reversing a key provision of the Voting Rights Act that required federal oversight of voting rules in states that had a history of racial discrimination, there's no telling what some of these jurisdictions may try to do in the future. As part of a new voter suppression project, professor Carl L. Miller at Harvard had his students take on some of these voting barriers, including one of the most famous tests — Louisiana's 1964 literacy test.

According to the Civil Rights Movement Veterans, the 1964 test was unique because of how it was designed and scored. No matter what African-American test takers wrote down, their answers would be scored incorrect — even if they correctly spelled the words or followed the instructions. To pass it, they needed to get every single question right. Meanwhile, white test takers almost always passed even if they missed a ton of questions, leading people to believe that the test was obviously rigged.

In the video below, you can watch Harvard students taking the 1964 Louisiana literacy test struggling to figure out the deceptive instructions and answer the calculating questions, such as, "spell backwards, forwards" and "print a word that looks the same whether it's printed forwards or backwards."

None of the Harvard students passed, stumped by the test's wording.

So, how does it feel to be demoralized by a voting literacy test? In the words of one Harvard student: "It's like, literally, an exam to waste my time."

Another student expanded on the test's main purpose:

I could imagine that if all you wanted to do was vote for your candidate, and then you had to be subjected to this very confusing and humiliating test, and you knew that you were being denied your right to vote arbitrarily — and I think most people would. You'd probably feel discouraged, but just kind of in the way that, 'Oh, they're never going to let me vote next time. They're just going to come up with an even harder test, so what's the point of trying?'

If you want to see just how crazy and confounding this literacy test was, the Civil Rights Movement Veterans have a copy of the original test available on their website.