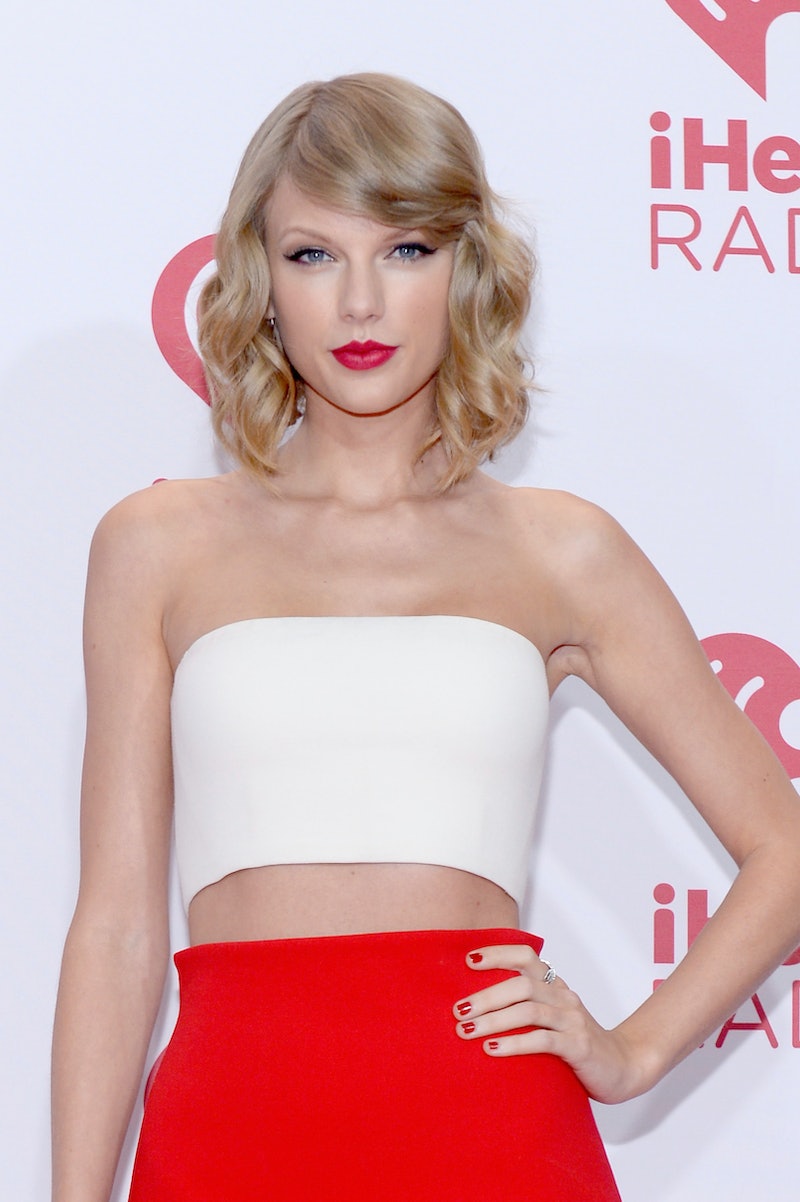 According to my research (read: mindlessly scrolling through Twitter and Facebook while I eat cereal), one of the most popular screengrabs from Taylor Swift's "Blank Space" music video is The Standing On The Horse Moment. I mean, of course it is. She's balancing on a G-D horse like it's no big deal, for Olivia Benson the cat's sake! And yes, that amazing moment is real: In a recent interview with MTV, "Blank Space" director Joseph Kahn said Swift actually stood atop that steed. Whoa. If I walk down a flight of stairs while wearing flip flops, there's a 98% chance I'll slip, so yes, I am very impressed by this.

So, how did she do it?!?! Much to my disappointment, Kahn did not explain exactly what went into making that shot happen or what post-production sorcery was involved. Can’t spoil the mystery entirely, I guess.

But because I am me, I refuse to leave this alone. I want to try to figure out how The Standing On The Horse Moment happened. I know very little about post-production or special effects or physics, but I do know a lot about going hog wild with theories.

Here are some really reasonable, totally rational, and completely realistic theories about how the "Blank Space" Standing On The Horse Moment came to be:

Taylor mounted the horse like she was going to go for a normal ride, placed her hands firmly on the saddle, swung one foot on top of the saddle, straightened that leg, and pushed herself into a standing position. Thanks to a strong center of gravity, she was able to balance like that for as long as need be.

Hm. That one is a little simple for my liking. Let's carry on, shall we?

Taylor mounted the horse like she was going to go for a normal ride. But then, two assistants grabbed her hands and helped her stand up on the horse's back. She was locked in place instantly. Did not budge at all.

Why? Because the saddle was magnetized and Taylor was wearing magnetized boots.

Taylor and the horse were in front of a green screen. Taylor was lowered onto the horse by green cables/green crane. Two assistants wearing green Morphsuits held Taylor in place. The assistants and the cables were edited out in post-prod.

Taylor secretly moonlights as a trick rider for the circus. Standing on a horse is old hat for Swift. She could've balanced on one leg while the horse ran around in a circle, but she didn't want to be a show off.

Taylor’s boots were equipped with mini jetpacks. She zoomed up to the saddle and parked her boots (and self) on the horse’s back. Whenever she felt wobbly, the jetpacks would automatically turn on to help her regain her balance. (Don't ask me how the jetpacks detect that sort of thing. I'm not a scientist.)

Taylor can fly, but if anyone witnesses her take flight, she'll lose the power. When it was time to stand on the horse, she told everyone on set to close their eyes. When they opened their eyes, T-Swift was on standing on top of the saddle.

If anyone asked how she did it, she told him/her to not worry about it.

The horse picked up Taylor by the collar of her blouse with his teeth and gingerly set her on his back. Several small birds flew right behind Taylor's back (they made sure to stay hidden from the camera). Any time Taylor started to lose her balance, the birds would grab her blouse with their beaks and help hold her in place. Like a Disney movie.

I'm pulling for #6 because OMG WHAT IF TAYLOR SWIFT COULD FLY?