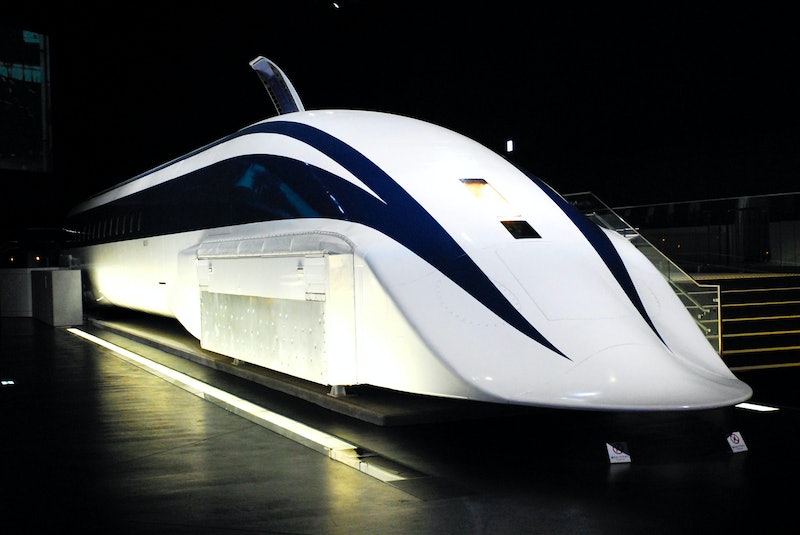 Commuters in Japan may be able to get around quite a bit faster in coming months. Central Japan Railway Company's maglev Shinkansen train — which travels at the breakneck speed of 310 mph — was opened to the public for an eight day testing period on Saturday, Nov. 15 (Maglev is short for magnetic levitation, dontcha know.) The train has been recorded to go as fast as 360 mph, but even in its commuter-friendly speed, it beats Japan's famous bullet train's speed by approximately 110 miles per hour, and you might freak out over how it works.

This train levitates, levitates, over the tracks using super strong mega magnets. So the train doesn't touch the ground. I repeat, it doesn't touch the ground – or the tracks for that matter. So you are literally speeding to your destination while suspended in the air. Granted, it's not very high at all, but it is nonetheless in the air and it is somehow safe enough that they are allowing commuters to test it for funsies. I don't know about you, but I think that is pretty amazing.

The test run took 100 people on a 27 mile ride that, at the highest velocity, will last, oh, I dunno, 40 minutes. The actual train will have 16 carriages and will transport 1,000 people at a time. And those 1,000 people will have so much more time to devote to wholesome activities — like work and hanging out with friends — instead of commuting.

The train hugs magnetic tracks, which push up against the train's magnets to create a levitation effect.

So cool, you guys.

Put into perspective, if the maglev train was utilized in the U.S., you would be able to travel between New York City and Washington D.C. in an hour. And if that isn't enough to convince you how cool this thing is, here are some really fast things that don't move anywhere near 300 mph:

I'll buy my ticket to Futuretown and some Starbucks for the road now, thanks.