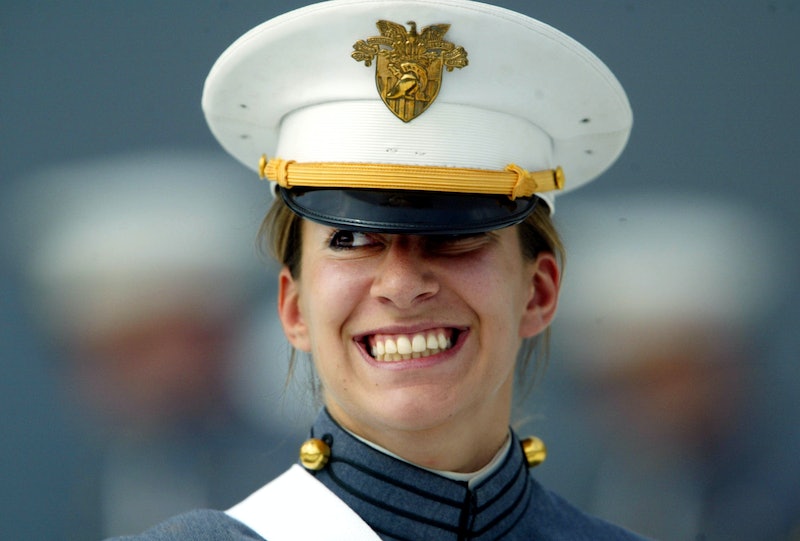 By the time I had finished the mile-long application, received my congressional nomination from Senator John Warner, passed the physical fitness test, and was deemed medically fit, I was a senior in high school with a stack of acceptance letters already. I was first in my class, an athlete, and active in my community — I could have gone anywhere I wanted. Why, then, did I opt for a college experience that involved not just an academic challenge, but physical and mental duress?

There are a lot of ways to answer that question. The financial piece was obviously a big part of it. I had a comfortable upbringing, sure, but my parents made no secret of the fact that 50 grand a year was simply out of the question. In all my teenaged cockiness, I had shunned the idea of public education and pursued the brand recognition that came with Harvard, Georgetown, Chicago, and the like. I learned quickly that brand-name schools (understandably) didn't consider me, another white girl from the 'burbs, as much of a "needy" candidate.

Probably the most significant challenge I faced at this point in my life, though, was the problem 99.999 percent of 17-year-olds run into: I had absolutely no clue what I wanted to do. The realization that a fancy schmancy Ivy League education meant shouldering almost a quarter of a million dollars of debt before I could legally drink was suddenly a lot more daunting. Why was I going to college at all if I had no direction, nothing to work toward? It was at this point that I seriously considered taking a year off to go get a job and get my head straight — something that I still happen to think would have been a great idea, by the way.

But then, there was the military option. Honestly, I had applied without much intention of following through. My grandfather had graduated in 1945 and had pushed it hard. It was interesting enough for me to visit the summer before my senior year, and I got all the right impressions from the people I met, but nothing really “called out” to me. It was only after my little existential crisis later that year that I gave it another look.

Here was almost exactly what I wanted: an internationally recognized college that paid me to get a world-class education, travel the world, learn how to do a bunch of different things, and walk straight into a pretty well-paid job. Not to mention that, as a junior Army officer, I’d have plenty of experience to fill up a résumé if I ever decided to get out. Oh, by the way, if I went and decided it wasn’t for me, then I could leave at any point before the beginning of my junior year, no questions asked, with a full transcript that I could take anywhere. Too good to be true, no? I was sold.

One week after high school graduation, I packed my bags (well, the one bag full of toiletries, socks, and undies I was permitted, at least) and headed up to the Hudson Valley. That summer was every bit as ridiculous as you'd imagine. Lots of yelling, running, scratchy wool uniforms, and 100 percent humidity.

During the four years that followed, every hour of the day was scheduled and regimented. While my high school friends were sleeping till noon and bitching about having to be across campus at noon, I was up, exercised, fed, and in class by 7:30 in the morning. Taking 24 credits a semester while being required to play sports in the evenings and train on weekends is probably mental, but somehow we did it.

What was most significant of all, at least to me, was the sense of responsibility that was instilled in us from the first day we arrived. The wars in the Middle East had proven that you were just as likely to be killed walking across base as you were in a good old-fashioned firefight. There were no “safe” routes anymore. We all knew that, regardless of academic major or branch of the Army that we chose, we were going to be leading soldiers in combat. Where else are 20-year-olds forced to accept that he or she will be responsible for the lives and well-being of three dozen other people, some old enough to be their parents? It’s a gut check, for sure.

Being forced to grow up so fast was certainly not easy. While I was (grudgingly) thankful for the focus and humility that the experience had given me, there was a lot about it that I didn't exactly love in the moment. I had no control over my own time. Breaking the rules was punishable with a prescribed number of hours spent walking around in a circle with a wooden rifle (not making that up). We were forced to go to football games. I had to take gymnastics class. I had to wear a uniform every day. The food left something to be desired. But I was also aware that the structure, the gymnastics, the wool uniform, and even the food were teaching me that even at a young age, my life could have purpose beyond my latest crush or an upcoming party or a mountain of cheese fries.

The summer between sophomore and junior year was the last chance we had to leave free and clear. At this point I had grown up, saved some cash, and had some direction, some very tangible hopes and ambitions. Suddenly the reasons I had come to West Point — that I had no clue what to do with my life and that I couldn’t afford a college education — weren’t exactly valid anymore.

I also knew plenty of people who had left the Academy already and were successful at their new universities or jobs. The wars in Iraq and Afghanistan were as bad as ever and the announcements over breakfast of the deaths of recent graduates were rolling in. My GPA was awesome, and I had 90-something academic credit hours in physics, chemistry, advanced calculus, English, politics, economics, and history — I could write my own ticket anywhere I wanted to go. Not to mention that, unlike a couple of years prior, I could now afford it.

Despite the maturity the Academy instilled early on, my decision to stay was certainly influenced by the superficial musings of a 21-year-old. I had a signing bonus of $33 grand waiting for me. Junior and senior year at West Point were full of new privileges, new responsibilities, and classes for my major. I had a new boyfriend. I had my friends. I was afraid people would judge me if I quit. I probably had something to prove.

Looking back, almost a decade later, I do wonder what my life would have been like if I had left. But I also know what I would have missed. I’d never have experienced the responsibility that comes from leading 36 soldiers in combat. I’d never have gotten a chance to see the world, to live and work in Europe, Korea, Africa, and the Middle East. I’d never have had the experiences that drove me to pursue medical school. I’d never have been paid to jump out of airplanes. I might not be married to my husband.

At the time, obviously, I didn’t know any of this. As corny as it sounds, what it came down to was a genuine desire to serve my country. I loved the idea of going to a “real” college, with the freedom to pursue a life and career wherever I wanted (and, let’s be honest…eat a lot of pizza and drink a lot of beer), but in only two years at the Academy I had been given opportunities and experiences that I never would have had anywhere else. It pushed me out of my comfort zone mentally, physically, and emotionally at a point in my life when I most needed to grow up. There was real responsibility and adventure on the other end — not just some job manning a copy machine for a company I didn't care about.

On graduation day, we sat in our itchy, stiff-collared dress uniforms in the sweltering summer heat as Secretary of Defense Robert Gates praised our commitment to a nation at war. It was then that I really appreciated the sacrifice I had made to devote my college years — and young adulthood — to truly selfless service. We may have spent some of it tired and frustrated, but there wasn't anyone who could deny that we were graduating with something you just can't get anywhere else: a shared sense of purpose.