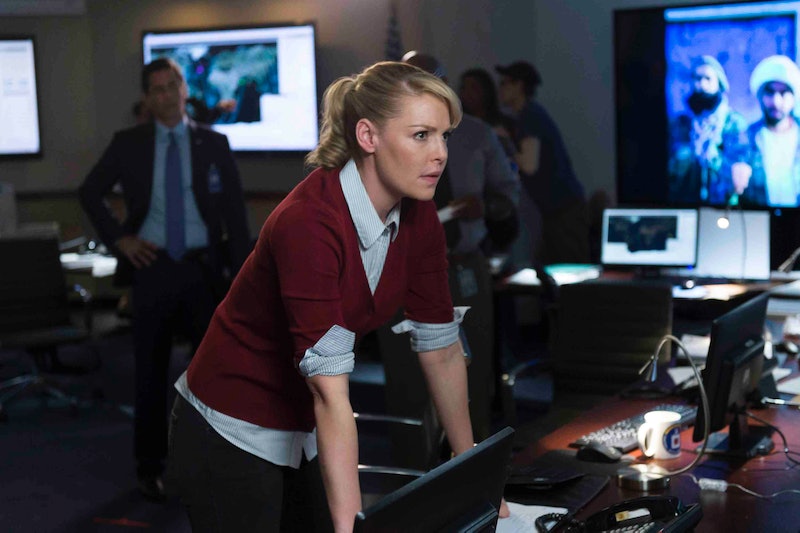 Tonight, Katherine Heigl made her return to network television in a blaze of walk and talks. I have a thousand questions about the mess of CIA-intelligenve-babble I just watched, most notably who is Nick on State of Affairs ? Dude just waltzes into Charlie Tucker's apartment, and she's like "I'm gonna pour myself a glass of scotch and not call the police, because you're a device to indicate that I'm hiding something." 'Cause you know what this show needs? Another twist, OBVI!

Let's just run down the short list of plotlines that were stuffed into this pilot: The American military has an opportunity to Zero Dark Thirty an Osama-Bin-Laden-style terrorist who is responsible for killing Tucker's husband. An American doctor who closely resembles set ex husband has been abducted by Isis-reminiscent fundamentalist group. A mystery person is texting Tucker, calling her early 2000s Limited blazer "punk-chic" and it's ominous, SO OMINOUS. Everything is a matter of life and death. Tucker's ponytail can't stop bouncing, IT WON'T STOP BOUNCING. Then, some random bloke breaks into her apartment and she's like WHATEV'S. Just another day at the old building and loan...

'Cause she knows this guy, and he knows her. They have that same kind of "round the block" rapport that indicates that they'll be banging multiple times before the season finale. He drinks her scotch, steals her lady derringers, and seems to know something about her. Maybe I'm just confusing all the pronouns, but it seems like the terrorist who killed her husband —this Fatah individual — may have been working for her?! GUH, my belly has been stuffed with so many twists that I feel like I'm about to vomit intrigue. Essentially, you can trust nobody in this show, because ESPIONAGE!!

A running list of others whom I don't trust: Newbie briefer Lucas (asks too many questions), General Khan (whose name may actually be Chaka Khan, as in the R&B/ Soul diva), Director of Important Things Skinner, Guy in the van who kidnapped Chaka Khan(who incidentally looks like Willem Dafoe's brother), man in newsboy cap walking dog (who are you??), and finally Charlie Tucker (she may have killed her husband, she has two last names, and her laugh at fellow lady-briefer's briefing joke was TOO loud).

Also, what hair-styling gremlin is lurking in Charlie Tucker's closet with a curling iron, prepared to fashion her hair into an updo at a moment's notice? I need an answer to this question.