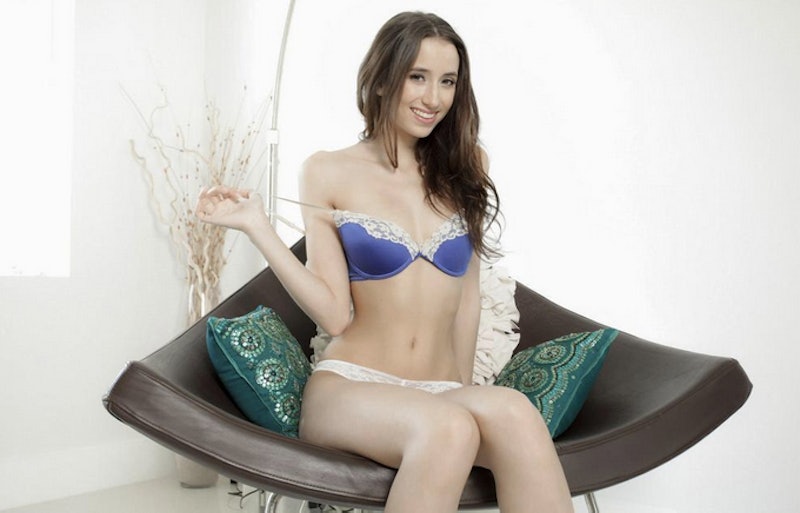 Knox begins her eloquent article by stating very simply, "As a porn actress, one of the perverse tragedies of public policy I often contemplate is the fact that people can pay to watch me have sex on camera but are considered criminals if they pay to have sex behind closed doors." The distinction between the public and the private act is important here, because there's a very fine line between paying to watch someone have sex, and paying to actually have sex with them, and that line is an arbitrary one drawn by our culture of propriety. When you get to the bones of it, both acts might be as depraved or as normal as the other. Which brings Knox to a discussion of the conditions under which sex workers operate. She says:

Which is a good point. The reason, perhaps, that so much crime and violence occurs in sex work probably has a lot to do with the fact that it's illegal. Women who sell sex don't have the opportunity for empowerment because they have no recourse to justice when they become victims of crime. Decriminalizing sex work would mean that we'd be able to police the conditions that these women work under, offering them channels to seek restitution for any harm that befalls them in their line of work. By keeping sex work illegal, we're essentially giving carte blanche for men to abuse the situation: if a prostitute is a criminal, we're tacitly approving a stripping of their human rights. Because as we know, criminals divest themselves of their rights upon undertaking criminal actions. Knox cites academic research to support this hypothesis:

"Barbara G. Brents of the University of Nevada, Las Vegas, studied the Silver State's legal brothels for more than 15 years and found that "employees report that they feel safe, are free to come and go and are bound only by their contract." In fact, 84 percent of the brothel workers her team surveyed said their job "felt safe," and no evidence of trafficking could be found. Legal prostitution wouldn't simply result in greater safety, but improved health as well."

Knox says, "Every client and sex worker has a story to tell, and the current regime of criminalization over compassion only mutes their voices and pushes them to the fringes of society where danger may lurk...We are nobody's rescue project, and we deserve rights, not handcuffs," driving her point home. Perhaps the only way to protect women in the sex trade, and yes, even women who feel they have no other choice but to enter the sex trade, is to treat them, in the eyes of the law, the way we treat any other profession. When prostitution ceases to be a crime, we might begin to see less negative consequences arising from the fact, and greater empowerment for women in the industry.

More like this
How To Fight For Reproductive Rights, Based On How Much Time You Have
By Courtney Young
Yomi Adegoke On The Offline Diaries & The Power Of Representation
By Jessica Morgan
The Music Industry Continues To Fail Black Women
By Precious Adesina
Please Respect Mia Khalifa’s Rebrand
By Charlotte Shane
Get Even More From Bustle — Sign Up For The Newsletter