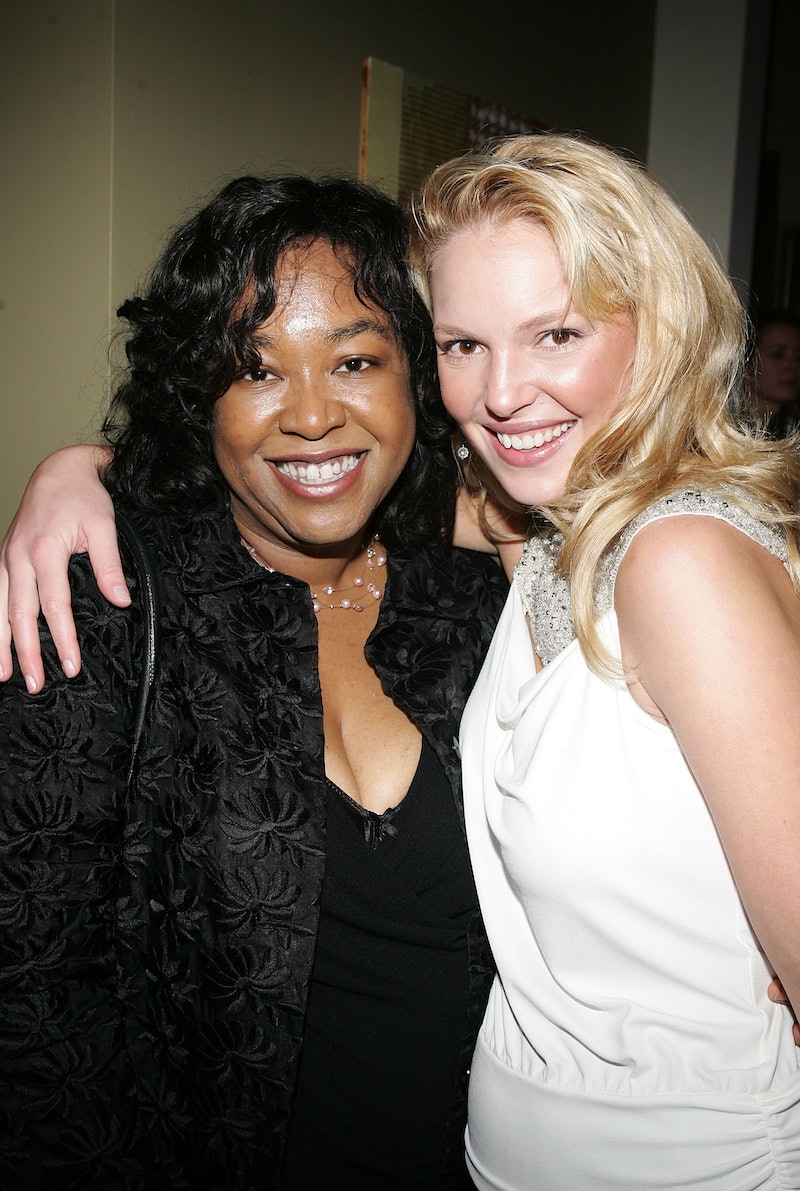 If you learn one thing from the ever present Katherine Heigl and Shonda Rhimes feud, let it be this: Do not ever get on the Grey's Anatomy creator's bad side. Once you're there, you're there for life. That's what Heigl has learned since she broke her contract and left the show on less than awesome terms back in 2010, and she (and her reputation) have been paying for it since. Recently, Heigl's expressed an interest in returning to Grey's, but Rhimes doesn't seem to be interested in a reconciliation. In fact, she's said that her new policy when hiring actors is to make sure there are "no Heigls" on set. Pretty harsh, right?

Of course, without actually being there, it's hard to see whether or not Rhimes' grudge holds any merit, but I'm inclined to side with Heigl on this one. The way she tells the story, her difficult reputation simply comes from times she's stood up for herself. Entertainment is still a male-dominated industry, and her opinion seems to be that if speaking up makes her a bitch, so be it. But understandably, Heigl can't help but be hurt by Rhimes' comments, and when she spoke with Extra while promoting her new show, State of Affairs, this week, she talked about the regret she feels that Rhimes no longer wants to work with her and pointed to Rhimes' recent "no Heigls" interview with The Hollywood Reporter.

The last one with Shonda...it sucks. I am sorry that she feels that way and I wish her nothing but greatness, and I have nothing negative to say about Shonda. I'm a big fan of her work. I watch Scandal every week, and so I'm sorry she's left with such a crappy impression of me. I wish I could do something to change that. Maybe I will be able to someday.

And should that someday come, I would be ready to welcome Izzie Stevens back to Grey's Anatomy with open arms — whether she stayed for good or just made a single appearance to tie up all those loose ends she left when she disappeared four seasons ago without much explanation. In fact, if Izzie wants to come back, I have a few ideas about how to make that possible.

To get closure with Alex

How is this dude supposed to move on with Jo when his trust in relationships is nonexistent because the way Izzie treated him haunts every decision he makes? He doesn't come out and say it, of course, but I feel like it's going to be really hard for him to have a healthy relationship with Jo (who's absolutely perfect for him) without getting some kind of closure from Izzie. If Heigl wanted to appear for an episode to accomplish exactly that, I'd be okay with it. Mostly because my fingers are crossed that Jo and Alex ride off into the sunset and live happily ever after.

As a visiting surgeon

As far as we know, Izzie's at a hospital somewhere close to her mother's house and still operating. Just like Kate Walsh made multiple appearances on Grey's after Addison moved to Private Practice, Izzie could totally do the same. She could stop in to assist on a surgery, and maybe she'd decide to stay.

To provide meta commentary on how ridiculous the show has gotten

I would love for Izzie to return to what is now called Grey Sloan Memorial Hospital to find that basically everything has happened in the four years since she left. Plane crashes, destructive storms, a million pregnancies — and that's just the beginning. Oh, Mark Sloan and Lexie Grey are dead? From a plane crash? That also took Arizona's leg? Oh, and you jokers own this place now? Of course, this would only work if she found it just as unrealistic as I do.

In the most wonderfully sad ending ever

I have this dream that Izzie will reappear in the show's series finale, and we'll find out that she's dead — maybe her cancer came back, maybe something totally unrelated has happened — and she's reconnected with George in the afterlife. Of course, this is probably never going to happen, and T.R. Knight would have to agree to appear, which is something else that is probably never going to happen, but it would still be amazing.