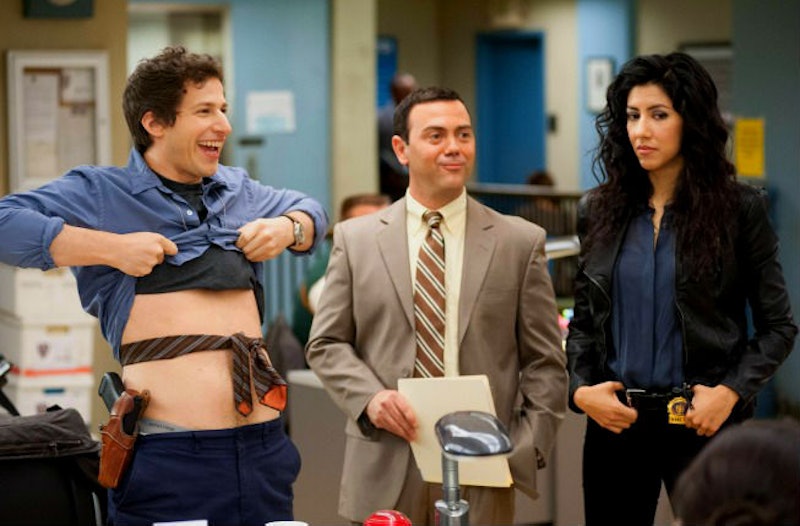 It pains me to write this, but I did not love the pilot for Fox's Brooklyn Nine-Nine. After following Mike Schur and his partner in crime(-fighting) Dan Goor from the hallowed ground of Parks and Recreation, I (and no doubt other fans like me) expect instant greatness. Unfortunately, Brooklyn Nine-Nine does not deliver immediately. But fear not comedy fans, let us remember how awkward Parks and Rec was before it hit its stride in Season 2 and became one of the best shows on television: it was rough. Brooklyn has the potential to come together, it just might take a few important adjustments.

Come on, guys. This one's obvious. I'm a Samberg fan and even I know this pilot is way too obsessed with his face (and apparently his midriff — see above). The former SNL Digital Short master stars as Detective Jake Peralta, the best and most unruly cop in Brooklyn's 99th precinct. Naturally, his Sambergian antics are the main draw here, but even Parks and Rec knows not to put all its eggs in the infinitely lovable, hilarious, basket of one Miss Amy Poehler — and she's about 10 times the draw that Samberg is.

The series puts some serious weight on Samberg's co-star Andre Braugher, who's had some bad luck on doomed, but well-made TV shows (ABC's Last Resort and TNT's Men of a Certain Age). Comedy might just be the thing that finally helps the talented actor find a semi-permanent home on the small screen. He's a perfect foil for Samberg's goofball without acting as a complete brick wall — he gets a few jokes of his own in while maintaining the stern nature of his strict police captain Ray Holt.

WHICH LEADS US TO THE ENSEMBLE

This is going to take some time. Again, similarly to Parks and Recreation's first few episodes, the Brooklyn Nine-Nine's pilot struggles a little in the chemistry department. Comedian Chelsea Peretti's city administrator Linetti shows the promise of a young Tom Haverford — which makes sense because the writer and comedienne is responsible for some of his hilarious dialog. It's the rest of the group that's a bit worrisome.

Melissa Funero's Detective Amy Santiago has the potential to be a rule-book-hugging weirdo with plenty of her own comedic gusto, but so far, she's simply the straight-laced lady placed in the precinct to highlight how wacky Samberg is. Terry Crews seems out of place — as he often does — but not in his usual, deliberate way. Stephanie Beatriz's gruff Detective Rosa Diaz has plenty of stereotypical New York cop material to work with, but she's not quite making an impact in her first episode. There's room for improvement, but it all depends on building the chemistry between these actors, and that means giving them scenes in which they might actually have an opportunity to build that chemistry.

Meanwhile, the most promising of the under-cooked ensemble might just be frequent outsider Joe Lo Truglio as Detective Charles Boyle. The bumbling detective can't pick up a dropped scone with smacking his head on a counter-top, but his sweet disposition and Brick Tamlin-esque commentary just might make him the sleeper in this group of weirdos. When he's not chastising criminals for wasting expensive cheeses, he's buying tickets to every movie at the local theater in hopes that Rosa will go out with him. Schur has delivered odd pairings before (Anne Perkins and Tom Haverford) to the tune of some pretty high criticism, but this pairing plays close enough to the opposites-attract rule that it might eventually work.

Beyond Samberg myopia and ensemble issues, Brooklyn Nine-Nine is taking on one of the toughest genres to parody. While it's a workplace comedy, the show also aims to lampoon cop show standbys and stereotypes. The problem with playing out some of these hallmarks of crime-ridden television is that they're so over-played already that they're funny enough when we encounter them in an average drama. Expecting Terry Crews to add a new layer of comedy to the typical precinct rundown (for example: Jake's weakness is that he "never managed to grow up") is more than a tall order; it's damn near impossible.

But despite my gripes, I've got faith in Brooklyn Nine-Nine. It's got a few gems in its grasp, a truly fearless set of leaders, and a few potentially untapped resources. If the writers and actors can gain enough confidence in the next few episodes to figure out their comedic esprit de corps and find a way to approach cop comedy with a more off-the-wall sensibility, the series just might work.

And because the show is on Fox, Brooklyn Nine-Nine, like The Mindy Project before it, will likely get at least a little time to develop before getting thrown in the back of a squad car and shipped off to exile with The Mob Doctor and Ben and Kate. Here's hoping that Schur and crew are up to the challenge.