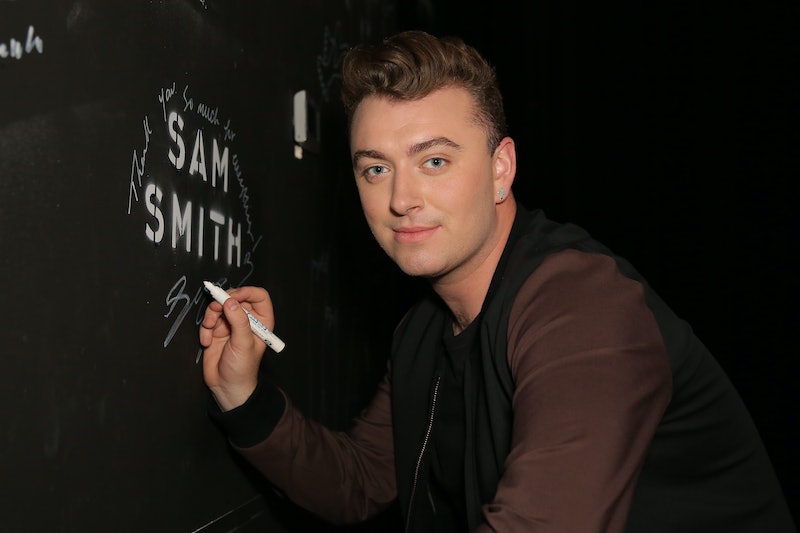 He's young, he's cute, and he's got talent to spare. I mean really, who wouldn't want to date Sam Smith? But, just because Smith is a major catch doesn't mean that anyone has actually caught him yet, so to speak. It's a rough dating world out there, guys. Now just add instant, mega fame and a crazy touring schedule to that equation and I'm sure it's way more complicated than we could ever imagine. Like, how do you just give a guy your number and not expect this handsome stranger to then pass it on to all his friends, family, and the dreaded internet? Or do you just bring confidentiality agreement papers with you to the bar and use them as coasters if you don't find anyone to your liking?

Either way, it appears that Smith is still most likely single since decrying that he's never had a boyfriend before in the Summer. He told Fade Magazine in their June/July issue:

I've never been in a relationship before. I've only been in unrequited relationships where people haven’t loved me back. I guess I’m a little bit attracted to that in a bad way. In the Lonely Hour is about a guy that I fell in love with last year, and he didn't love me back. I think I’m over it now, but I was in a very dark place. I kept feeling lonely in the fact that I hadn't felt love before. I've felt the bad things. And what’s a more powerful emotion: pain or happiness?

And, in August, Metro UK relayed what Smith said about his dating life at the V Festival, "I've been on a couple of dates. I’m good at dates. I used to get really nervous but now I’m better. There is one particular guy that I've been on a few dates with. I like him but who knows?" It's comforting to see that Smith doesn't just hop into relationships or take them lightly. In fact, he told Metro UK he's totes not into the surface aspect of Grindr and Tinder,

No offense to people who go on Tinder but I just feel like it’s ruining romance, I really do. We’re losing the art of conversation and being able to go and speak to people and you’re swiping people... From my experience the most beautiful people I’ve been on dates with are the dumbest, so why would I swipe people who are 'unattractive' when I could potentially fall in love with them? Stop Tinder and Grindr!

So, while Sam is most likely still single, unless those "couple" of dates with that guy panned out, it's clear that when he does finally settle down, it'll be with much romance and deliberation. Selfishly, all I can think about is the potential for new album material and it's got me swooning. Just, for Sam's sake, hopefully this time around it's more lighthearted but equally as soulful. Even if he thinks pain is a stronger emotion than happiness.