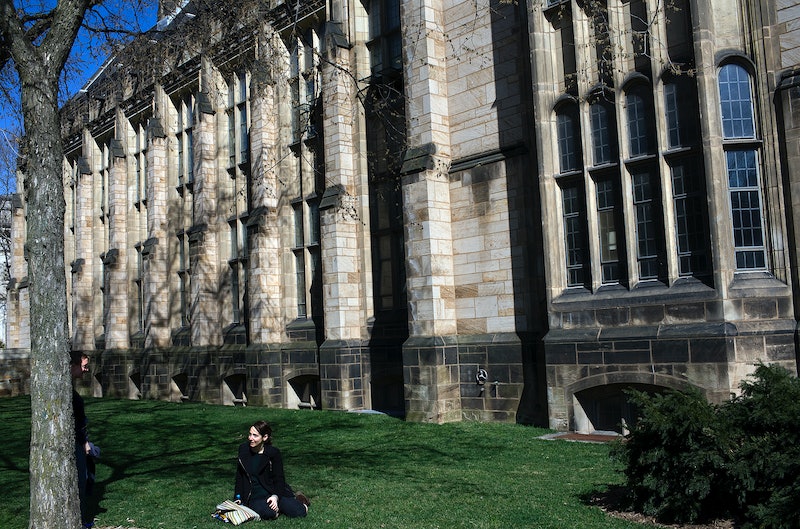 In the Sunday issue of The New York Times, Yale Law School Professor Jed Rubenfeld published a lengthy op-ed dissecting college sexual assault and rape policies. Universities nationwide have "failed abysmally" to protect victims and curb future assaults, Rubenfeld writes, but newly enacted policies are now robbing the accused of rights. Above all, colleges are redefining sexual assault as sexual intercourse while intoxicated, the professor concludes, which means every couple who saunters back to their door room with a few beers in them is now complicit in rape. Except, not really, say Yale Law School students who signed a letter criticizing Rubenfeld's op-ed. It's the latest chapter in the escalating debate of the "right way" and "wrong way" of going about on-campus sexual assault.

Rubenfeld, who specializes in criminal law, argues that university policies have gone too far, especially in an environment where alcohol and sex tend to mix. To be sure, the Yale professor has some spot-on commentary, acknowledging that America's high drinking age means most college parties end up in male-dominated spaces, instantly putting women in a vulnerable position.

But Rubenfeld has come under fire for his comments on what actually counts as consent. Citing definitions from Smith, Mount Holyoke and Hampshire colleges, which say that consent given while under the influence is actually not consent, he writes:

The Yale professor really steps into the minefield, though, when he insinuates that schools are persuading students — primarily its female students — into believing they're victims once they've had a drink at a party. It's an ideology not so dissimilar than right-wing pundits who claim feminists have created a "victim mentality" among young women:

Sexual assault may not be perfectly defined even in the law, but that term has always implied involuntary sexual activity. The redefinition of consent changes that. It encourages people to think of themselves as sexual assault victims when there was no assault. People can and frequently do have fully voluntary sex without communicating unambiguously; under the new consent standards, that can be deemed rape if one party later feels aggrieved. It will take only one such case to make the news, with a sympathetic defendant, and years of hard work building sexual assault protections for women on campus will be undermined.

In response, a group of Yale Law School students called out Rubenfeld in an open letter for being "disconnected from the reality victims face" and, well, entirely "wrong on the law." The Yale students argue that Rubenfeld is misrepresenting some of the broader policies, ignoring the fact that these new measures aren't targeting drunk students having consensual sex, but "repeat offenders [who] intentionally target classmates who are vulnerable or incapacitated by reason of intoxication."

And as for a society of baseless victims? The Yale students write:

Rubenfeld’s reductive account of affirmative consent not only trivializes the experiences of countless students who have experienced campus gender-based violence, but also suggests that these survivors seek special status as victims. The professor assumes that there is some power, comfort, or pleasure in victimhood: why else would one choose to “think” of oneself as a victim without any actual harm? ... But, rather than looking to survivors’ real experiences, both men instead rely on archaic, sexist stereotypes of spurned women who cry rape, and on the paternalist notion that women cannot be trusted to know the difference between consensual sex and sexual assault.

Rubenfeld is hardly a lone voice in this conversation. In fact, following the passage of new anti-sexual assault legislation like California's "Yes Means Yes," more law professors from prestigious universities are feeling the need to speak out against what they consider bad policy. Just last month, a group of professors from Harvard Law School signed an open letter with a similar thesis to Rubenfeld's op-ed, arguing that university sexual assault policies were denying accused students of due process, as well as "overwhelmingly" stacking the cards against them.

Rape and sexual assaults cases are sensitive situations — especially in an on-campus environment — and both the victim and the accused deserve equal treatment under the law. But with data from the Department of Justice showing that nearly 95 percent of on-campus rapes go unreported, maybe Rubenfeld and his colleagues should ask themselves what's the main problem here: false rape claims or discouraging sexual assault and rape victims to come forward? Something tells me it's the latter.