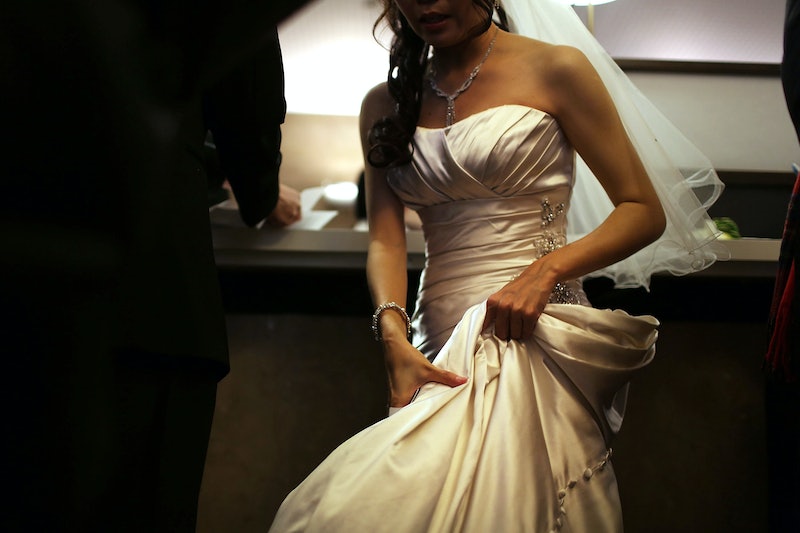 On Nov. 7, Kings County, California granted a marriage license to Charles Manson, so that he can marry his betrothed from behind bars. So, yeah, that's happening. Now that the infamous mass murderer and cult leader is about to go off the market, let's get to know his bride-to-be a little better. Who is this lucky lady who finally got the notorious bachelor to commit for the first time since the '60s? No, I'm not being earnest. Yes, I think this girl is probably missing a few screws, but let's investigate. Just who is Manson's fiancée, Afton Elaine Burton, and why is she marrying the most terrifying man on Earth?

Burton, who goes by the moniker "Star," told Rolling Stone last year that she already considers herself Manson's wife even though the wedding hasn't happened yet. In fact, it's a role that she was born to fulfill.

Yeah, well, people can think I'm crazy. But they don't know. This is what's right for me. This is what I was born for.

The two have been "dating" through letters and phone calls since she was a teenager, and at age 19, Burton moved to the California city of Corcoran, to be closer to 80-year-old Manson, who is spending life in prison at Corcoran State Prison. Since then, Burton has remained steadfastly loyal to the convicted serial killer and maintained that he's innocent, telling CNN:

The man that I know is not what they have in the movies or in documentaries and the books. He's nothing like that.

However, many believe that Burton is just another impressionable soul who fell under Manson's influential spell, more than 40 years after his heyday as a murderous cult leader. Just who is this poor soul who lost her way?

Before moving to California, Burton lived with her parents in Illinois. She first discovered Manson at the age of 16, when a friend showed her his environmental writing, which prompted Burton to start corresponding with the inmate. In 2007, she used $2,000 she had saved from working in a retirement home kitchen and moved to Corcoran at the age of 19. After that she started visiting Manson every weekend for up to five hours a day.

Burton was drawn to Manson's environmental mandate ATWA (Air, Trees, Water, Animals), which supports these elements as a way to maintain balance on Earth. When asked about Manson's use of manipulation, Burton told CNN:

The only thing that he's trying to manipulate people into doing is planting trees and cleaning up the Earth. He genuinely cares about that. He's nice to everyone. I've never seen him try to be manipulative. I've never seen any of that.

Burton runs several pro-Manson websites that advocate for his innocence, including Release Manson Now. Once they tie the knot, she wants to help work on his case because she'll be privy to documents and information restricted to family members.

4. Her Parents Are Supportive of Her Marrying Manson

Though Burton claimed that her parents used to lock her away in her room while growing up in a devoutly religious household, she told MailOnline that she has a "positive relationship" with them now. Her dad, Phil, made it clear that Manson would not be welcome in his home, but that doesn't mean he won't support his daughter.

We have not, we are not going to and we never will, no matter what she does in her life, disown our daughter.

As for Burton's mom, Melissa, she firmly believes that Manson is in love with her daughter, telling ABC News that he's been good to her.

5. She Resembles One of Manson's Family Members

Burton bears a striking resemblance to Susan Atkins, aka "Sexy Sadie," who was a well-known member of the Manson Family. She was convicted for her role in several murders, the most notorious being the Tate/LaBianca murders.

Burton does not feel any familial love for Atkins, however, telling Rolling Stone, "That b*tch was f*****g crazy" and calling her a "crazy f*****g whore."

6. She Tends To Do What Manson Tells Her to Do

Despite her insistence that Manson doesn't manipulate her, he was the one who bestowed the nickname "Star" on her. And he also convinced Burton to carve an X into her forehead, as he had done with early family members, in protest of the prison throwing him in solitary.

7. They Will Not Be Reproducing

Since Manson is serving life in prison without the possibility of parole, he is not permitted to have conjugal visits. So, no, these two will not be breeding. Can I get a "Hallelujah"?