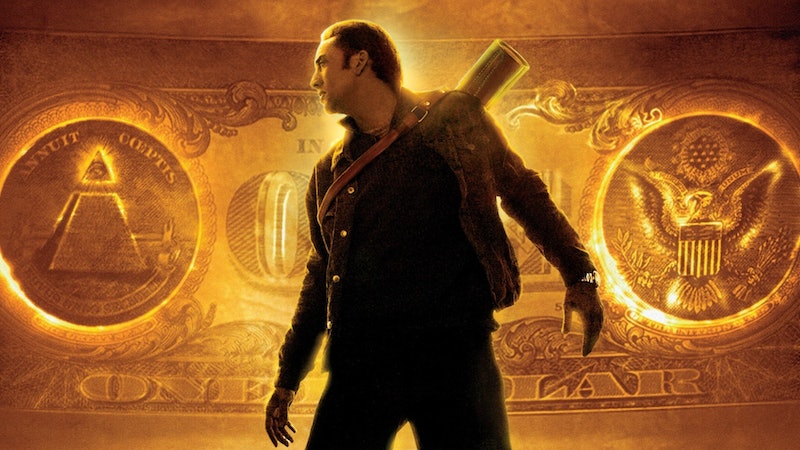 If there was a king of meme-land it would be Nicolas Cage. He's the face of the "you don't say" meme guy and his face has been photoshopped onto just about every single other celebrity. So what better way to celebrate the 10th anniversary of National Treasure than showcasing all the best memes inspired by the film? I can't believe it was already a decade ago that the modern-day Indiana Jones-esque movie premiered. I guess it's hard to believe that because the movie is still so ubiquitous today. I quote Cage's dramatic, "I'm going to steal it. I'm going to steal the Declaration of Independence" line practically on a daily basis. (What? You don't?)

It's fun to laugh at the jokes people make about the film. After all, it was pretty over-dramatic at times. (Cage is prone to that.) But you're free to enjoy the memes guilt free, because Cage himself doesn't mind what the Internet says about him. “The internet has developed this thing about me," he admitted in 2013. "I don’t know why it is happening ... [But] I’m now of the mindset that, when in Rome, if you can’t beat ’em, join ’em.”

See? Now you can laugh along with Cage with these amazing National Treasure memes.

LORD OF THE DECLARATION

Nothing like combining two memes in one. In this case it's the Lord of the Rings "one does not simply walk into Mordor" joke.

If you're not declaring your love to your S.O. via Nicolas Cage, you might as well break up.

This is a play on Cage's recent movie Left Behind which is about a bunch of people vanishing off the Earth. So, this meme is drawing from two Cage movies. Cageception.

This made a lot more sense last year when the government shut down, but I can still appreciate it.

It doesn't get much more romantic than this.

Is this not everyone's plan?

That sun was creepy to begin with, now it's even scarier.

The Smashing Pumpkins song gets a very accurate Cage makeover. It's especially funny because not only does it rhyme, but Cage does have a lot of rage (and starred in a movie of the same name).