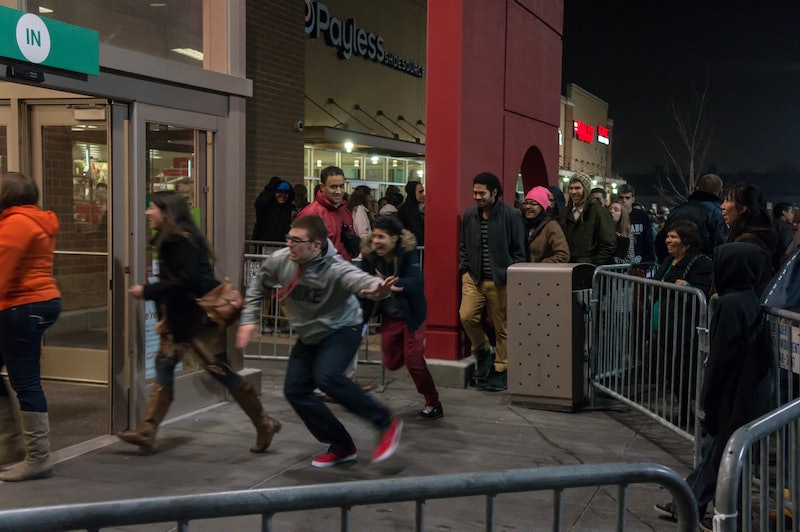 I'm not going to sugarcoat it: Black Friday blows. I feel like everyone has their moment when they truly realize the power of Black Friday, and mine happened roughly five or six years ago. While driving to celebrate Thanksgiving on a particularly cold afternoon, I looked out the window and saw two hopeless shoppers shivering in a self-created line for Best Buy. It just kind of seemed like the worst.

As Best Buy is famous for its televisions (and random stuff that you happen to grab close to the checkout line — blank CDs? Sure! I haven't made a mix in about three years, but maybe now is the time!), I think back to the brand new television I quickly destroyed back in 2012. After my husband and I got married, we splurged on a new TV. We ate dinner in front of it, and used it to bring Netflix entertainment to our screen-addicted eyeballs. It was like a family member, who never argued back with you and calmed you with sweet 30 Rock episodes. And then, I ruined it one afternoon while moving around some furniture. How pissed would I have been if I camped out for 24 hours and suffered from ice cube hands in order to finally purchase something that would (accidentally) break so quickly and unexpectedly?

Gifts and purchases come and go, and while some people are looking for an excuse to avoid their family, Black Friday is a poor one. It's pretty much making a statement that your priorities are dedicated towards buying, and not actually appreciating the moment. After all, all of these material items break. Is it really worth it to stand in line for hours when you could have been tucking into Thanksgiving leftovers with your family? How much do you even value your own time, if you're willing to give up your own comfort and sanity just to get a head start on holiday shopping?

And in case you weren't convinced already, here are a few other reasons why Black Friday ruins the entire concept of both Fridays, and everything ever.

The worst feeling ever is waiting in line. Thanks to the invention of self-checkout and EZPass, I can tell you for a fact that I'm not alone. While online shopping is perfect for those with massive crowd anxiety, the malls are still crowded for the in-store deals you might not be able to get electronically.

If you find yourself with crowd-rage on your typical Friday shopping trip, magnify that by 100 percent for Black Friday. These people don't care about clearing a path for others. They'll stand in the way, they'll walk in front of you with no respect towards your personal space, and they'll (gasp!) forget the universal rule of lines.

Sure, we only hear about Black Friday deaths when they happen, but that's the thing: they happen. Being stomped over for an xBox is probably the worst way to die. You died, because someone wanted to save 20 bucks and didn't care how. It's a preventable accident.

Can you imagine being so unruly and inhumane that you will literally walk over someone for your own gain? Could you play video games without thinking about how much that machine actually cost? I know — I got real dark just now.

Is there anything more frustrating than circling a parking lot seven times in hopes of finding the perfect space? This all happens during a season where bundling is necessary. You can't park far away and take a leisurely walk to the entrance. You'll be cold and miserable (which will add to your shopping rage), and slowly curse every car that managed to find a spot closer than you.

Finding a parking space on Black Friday is the first step to starting the day as an angry and terrible human being. You'll face other drivers who are equally frustrated, and might get into a screaming match over someone stealing your find at the last minute. For the record, yes — blinkers are the best way to claim your spot, but not everyone will adhere to this rule. Get ready for some ignorance.

4. YOU'RE CUTTING A LEGIT HOLIDAY SHORT

Listen, buddy. Someone made you that pumpkin pie last night. They made it for you to enjoy and savor. Leaving early, before the coffee and conversation, is not an excuse if you're doing it based on Black Friday. Black Friday is not an official holiday.

Unless you're buying the perfect present for your Thanksgiving host, their feelings might be a little hurt. (And even that is a stretch.)

Many people see Black Friday as an "event," and this is what I hate the most. Facebook posts go up about how people "Survived Black Friday!" It's kind of similar to people well over the age of 21 Instagramming photos of booze. It's not a big accomplishment, nor is it something that deserves praise.

Every other Friday up until Christmas will also allow shopping. They'll also have deals, and electronics will be shoved down your throats regardless of the day. Despite the way it's advertised, Black Friday isn't the "first shopping day of the holiday season." It's just the first day that Christmas displays aren't met with the feeling of "Isn't this up a little early?"

If you don't manage to make it out on Black Friday (good for you!), keep in mind that you still have a ton of time to purchase presents for your loved ones. And honestly, they don't care about what day it was purchased, nor should they care about how much you paid for it.

6. FRIDAYS SHOULD BE CELEBRATED

There's a reason why the term "TGIF" was created, and it wasn't just to bring Urkel onto our screens back in the '90s. Friday is a day of mass celebration. Friday is a day where the typical office worker knows that they have two glorious days to do anything they want after they close the doors. Even though I personally think that "TGIS" should be a thing (since Saturdays are the best days of all!), I sadly don't control popular day-related acronyms.

Why should you waste a luxurious Friday doing something that just might end with you getting a concussion? The time spent battling the chaos could be spent like any other typical Friday — with wine and poorly produced reality TV shows.

You might notice a few more mall security guards and police officers while filling your cart with goodies. These law abiders have been brought on to help make sure that things don't get out of control. Instead of patrolling late night clubs and that shady diner up the street, they're at a place that seemed relatively safe yesterday.

It's good that these folks are around, but they shouldn't have to be. They're there in case someone pepper sprays someone else over a sparkly 60 percent off iPhone case — an ideal stocking stuffer. They're making sure that nobody riots over the televisions, or starts a heated argument over something dumb. They're there for crowd control, since crowds have forgotten how to control themselves when "hot dealz" are present.

Isn't that a little sad? Think about it. Even though Friday is a typical shopping day, they're only brought out on Black Friday because people have truly destroyed the meaning of the holidays, and have the potential of making it super dangerous.

In short, Friday's aren't alright for fighting. Fridays should be reserved as days when you can truly enjoy yourself. Black Friday? No thanks.

More like this
An Honest Review Of The TikTok-Famous WalkingPad
By Kaitlyn Wylde
25 Quotes About Love To Share During Pride Month 2022
By Madeleine Aggeler and Emma Garza
Charlotte Tilbury Just Launched A Royal Collection To Mark The Queen’s Platinum Jubilee
By Tomi Otekunrin
If You're Lazy But Want To Be Organized, Here Are 44 Things You'll Wish You Knew About Sooner
By Rebecca Martinson
Get Even More From Bustle — Sign Up For The Newsletter