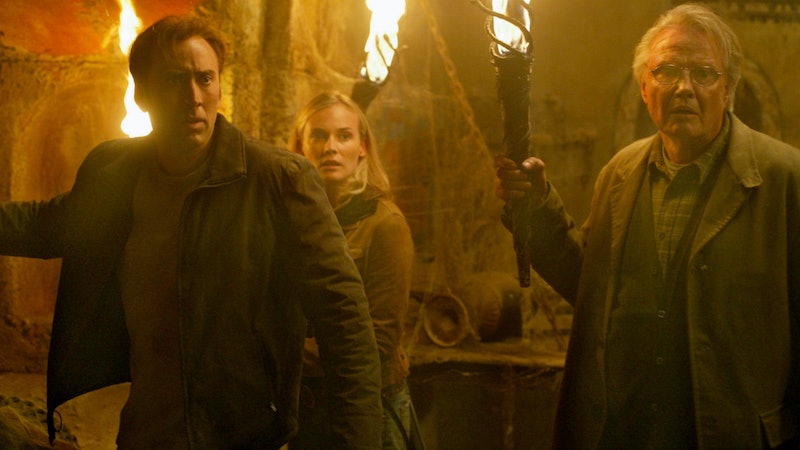 Movies about conspiracy theories are always intriguing because they challenge viewers to think creatively and solve clues. So it's no wonder National Treasure was such a hit when it premiered 10 years ago on Nov. 19, 2004. But with a movie that relies on history to provide clues to a hidden treasure, you have to wonder, how much of National Treasure is real? I re-watched the film just for you, (and for myself, because I love it) and fact-checked the statements the movie makes viewers take as fact.

It's not entirely crazy to think that the film is being 100 percent accurate, even though it's a conspiracy film. Jim Kouf, who co-wrote the screenplay, wanted it to draw on actual history. According to National Geographic, "he tried to include as many references to U.S. history—and use as many real locations—as possible." But still, he admits, "If we were laying it out as a true story, then I'd agree that we're taking too many liberties."

To make it an action film they had to spice things up a bit, but their goal remained the same: Get people interested in the past. "After seeing the movie, my daughter grabbed a copy of the Declaration of Independence and brought it to school with her. That was very exciting," Kopf said. "If it gets people to also look at history differently and pick up a book about the Founding Fathers, that's great."

It's true the movie did take a few liberties. But they still had some fact over fiction, as the answers to the following 13 questions prove.

WERE THE FOUNDING FATHERS MASONS?

A few of them were, George Washington in particular. Charles Carroll, though, the final living signatory of the Declaration of Independence, was not a Mason. In the movie he's the Mason who supposedly held the last clue to the treasure, but he was Catholic, and Catholics are not permitted to join the Freemasons.

IS THERE REALLY A LOST TEMPLAR'S TREASURE?

Maybe. There are rumors that 18 Templar ships went missing that contained a huge wealth. But that's all it is: A rumor. Maybe one day it'll turn up and we'll finally get the lost Library of Alexandria back. Imagine all that knowledge. Sigh.

WAS THERE REALLY A SHIP CALLED THE CHARLOTTE?

Yes. The British ship was lost off the coast of Newfoundland in November of 1818 and was never found. In the movie, the Charlotte was discovered buried under ice in the Arctic Circle which encompasses portions of Newfoundland. Technically it could be there in real life, but I'm not volunteering for the search.

IS THERE A CLOCK ON THE BACK OF THE HUNDRED DOLLAR BILL?

Yes. On the back of the hundred dollar bill is Independence Hall, where the Liberty Bell used to be housed. In the movie Cage (Ben Gates) and his buddies magnify the bill to see the time on the clock which reads 2:22. In real life the bill does indeed have a clock that reads 2:22. Officially it's documented as being 4:10, but to me it looks more like the little hand (the hour hand) is pointing to the two. In 2013, the bill was re-released and the time was changed to 10:30. There's no known reason for why either of those times were chosen.

Sort of. He is not credited for the (painfully annoying) jump in time. Rather New Zealander George Vernon Hudson is credited for proposing the official idea in 1895. But Benjamin Franklin did come up with a similar concept in satirical 1784. He wrote an article that suggested saving on candles by waking up earlier to maximize on daylight. But since Benjamin Franklin is on the hundred dollar bill and the movie was running on a clue from that monetary note, they opted to credit the Founding Father for the suggestion, rather than the New Zealander.

Yes. In the film, Ben Gates puts UV invisible ink on a George Washington campaign pin to send to Diane Kruger's character Abigail Chase. She touches the pin when she gets it, and the ink rubs off on her hands and later on the keyboard she types the preservation room password on. This allows Ben to run a UV light over the keyboard and see which letters she typed in order to guess her password. But would the invisible ink really lasted long enough on her hands that it would have rubbed off on the keyboard after she touched the pin?

According to this UV ink retail website, "The ink does not wash off, but will eventually wear off if applied to skin ... The ink will fade if left exposed to sunlight for about 1 week." In other words, yes, it would have lasted long enough to stay on the keyboard because the whole event happened in one day, and it takes about a week for the ink to wear off.

However there is one flaw in this plan, and it's that Abigail would likely never have touched that pin in real life. She knows the value of old objects like that and even warned Ben not to touch her collection earlier that day. Someone with that knowledge of its value would have put gloves on before rubbing the surface.

WOULD RILEY HAVE BEEN ALLOWED TO SET OFF THE HEAT SENSORS WITH HIS CAMERA?

Maybe he would have been permitted to use his souped-up laser video camera in back in 2004 to activate the document's heat sensors. But in 2010 the National Archives banned taking photos and videos because the light from the flash could further damage the documents. Riley would have been allowed to bring the camera in, but wouldn't be permitted to use it. Who knows how Nic Cage would have stolen the Declaration in this decade.

DO THEY ACTUALLY SELL LIFE-SIZED DOCUMENTS IN THE GIFT SHOP?

In the film it cost Cage $35 dollars to buy a replica of the document. The store does sell such things, but these days they only run for $9.95. Pretty sweet deal.

Ben puts a champagne glass that Abigail touched in a bag with some iodine and super glue which makes her finger prints visible and peel-able for him to use at the security check in. This is a dumbed-down version of a complicated process involving super glue and iodine which would reveal the prints...in about six hours. The movie showed it happening in about 30 seconds and without having gone through all the proper steps, but the sentiment was there.

IS THERE ACTUALLY A CODE IN THE SILENCE DOGOOD LETTERS?

There's a code in any document if you try hard enough. In the film, the map hides a series of numbers all of which correspond to a page, sentence, and letter in that sentence in the Silence Dogood letters. When put together the full hidden clue was "The vision to see the treasured past comes as the timely shadow crosses in front of the house of Pass and Stow" (which is a reference to the Liberty Bell).

Benjamin Franklin wrote these letters when he was 16, and the Liberty Bell wasn't commissioned until 1752—long after Franklin wrote those letters. So no, he didn't put clues in the pages. But anyone afterwards could have drafted the code looking at them. They simply had to find the letters they wanted to spell out the code and then write the corresponding numbers down.

COULD BEN REALLY HAVE CUT THROUGH BRICK TO GET THOSE 3D GLASSES?

No. but not because of the brick's mortar strength or the sharpness of the knife. As someone pointed out on moviemistakes.com, security at the Independence Hall is very tight and Ben Gates would not have been permitted to carry a knife in at all, much less attack the physical structure.

WOULD LEMON JUICE AND HEAT WOULD REVEAL INVISIBLE INK?

Nope. Lemon juice is its own invisible ink that appears when heat is applied. By rubbing lemon juice on the Declaration's map, they would actually be writing over any invisible ink that would be there. It's essentially whiting out the original invisible writing with more invisible ink. They might have wanted to try with heat alone to reveal the map, if there was one.

IS THERE A HIDDEN TUNNEL UNDERNEATH TRINITY CHURCH?

New York's underground has been landscaped within an inch of its life to install the subway system. If any such tunnel full of treasure existed it would have been found by the subway tunnel crews.