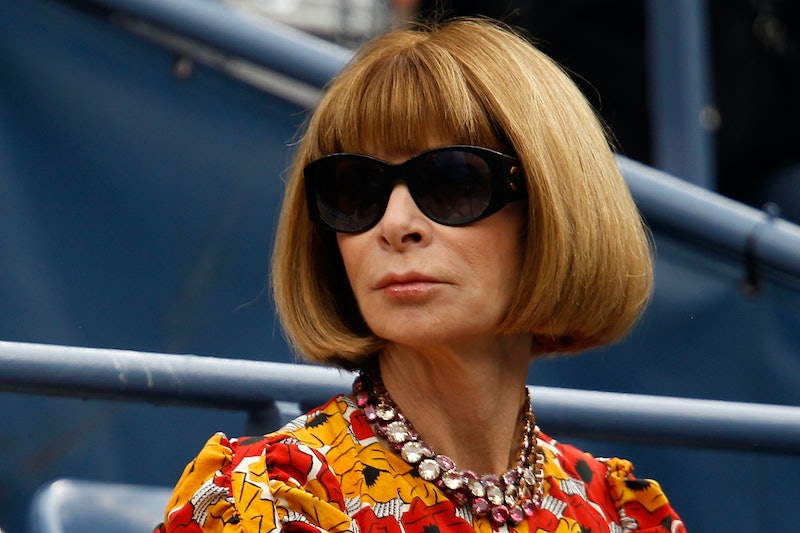 Alright, so Anna Wintour — as fabulous as she is — doesn't exactly have a reputation for being completely in touch. Case in point? That Kimye Vogue cover. That wasn't the first time people wondered what Wintour was thinking, like when she slated a newly twerk-happy Miley Cyrus for the cover of Vogue and then promptly canceled said cover after Cyrus spent that Video Music Awards show gyrating on Robin Thicke. Or her rumored disapproval of showcasing larger body types on her covers, brought into the spotlight that time an extremely zoomed-in and photoshopped image of Lena Dunham graced Vogue.

Still, there probably isn't any better example of a time in recent memory that made people stand back and ask "What was Anna thinking?" than when that now-infamous Kimye cover hit newsstands. The April 2014 cover — featuring the reality star in a wedding dress alongside her then-fiancé — was the cause of an onslaught of backlash from the fashion industry, who wondered what the crème de la crème of magazines was coming to, if Wintour was just desperately trying to sell more issues, or if Kanye begged his way onto the cover. Turns out, Wintour wasn't as out of touch as everyone thought. In an interview at the Metropolitan Museum of Art Monday evening, the infamous Vogue editor opened about that "kontroversial" cover:

"I see the role of Vogue to reflect what’s going on in the culture. The first celebrity that I put on the cover of Vogue was Madonna, and that was considered completely controversial at the time, too. It’s such a long time ago probably no one remembers, but she was a very controversial figure. Now she’s part of the establishment. I think if we just remain deeply tasteful and just put deeply tasteful people on the cover, it would be a rather boring magazine! Nobody would talk about us. It’s very important that people do talk about us."

Wintour does make an excellent point and she kinda just made me feel stupid for ever scoffing at that cover in the first place. Wintour knew the cover was controversial, and that technically Kim Kardashian and Kanye West are kinda "distasteful" people... and that was precisely why she ran it, showing everyone that the woman has always been in the loop after all. Her mention of the Madonna cover is the perfect example of how Vogue + controversy isn't really anything new — and how that is so very high fashion. So, people please, shut up about that Kimye cover already and check out these other controversial Vogue covers from throughout the years that also got everyone's panties in a twist.

In what would normally be stereotypical avant-garde shot, model Kristen McMenamy was photographed covered in oil and lying lifeless on some rocks. Just remember, that this was taken around the time of the Gulf oil spill, which we're still seeing the effects of. So. There's that.

This cover shot by Terry Richardson (of course) provoked the question of whether the brand was glamorizing domestic violence.

LeBron may have been the first black male to be on the cover of Vogue (good) but the cover was oddly similar to a vintage King Kong poster (oh so very bad...)

The cover of Vogue Italia's September 2011 cover featured model Stella Tennant and her itty bitty waist — 13 inches, to be exact. Created by an expert corsetiere, the cover was attacked for promoting impossible body standards.