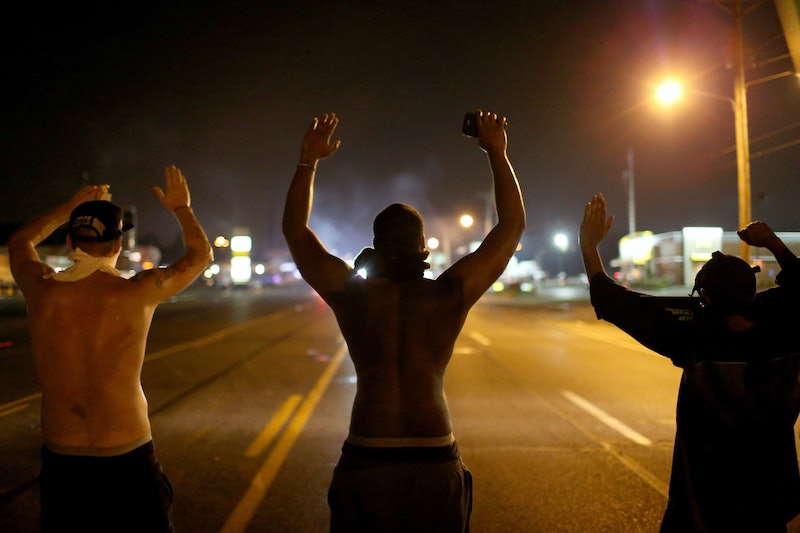 On Monday, a grand jury cleared Officer Darren Wilson of criminal charges for the fatal shooting of Michael Brown in August. The decision was announced by prosecutor Robert P. McCulloch after a tense few weeks of anticipation in Ferguson, Mo. that included Gov. Jay Nixon declaring a state of emergency in preparation for the announcement.

In a statement just after 9 p.m. ET, McCulloch spoke of the "diligent" grand jury and criticized both social media and the press. Having announced that no charges would be brought against Wilson, McCulloch said: “The statements of all witnesses were challenged by the prosecutor, by the police and by the grand jury members themselves. Physical evidence doesn’t change. It remains constant. As such it remains a solid foundation.”

Prior to the decision, groups of demonstrators gathered to discuss their next steps in the event of an acquittal, which was widely expected. Boycotts of the region's retailers and further — and perhaps more intense — demonstrations are forecasted to take place in protest of the no-indictment vote.

In a statement just prior to the announcement, the St. Louis police department said:

As a police department, our primary responsibility is to protect both life and property for our citizens, and we are committed to doing just that. St. Louis Metropolitan Chief of Police Sam Dotson, Missouri State Highway Patrol Captain Ron Johnson, and I, have prepared extensively as a Unified Command, for the release of the grand jury decision. Our commanders have been meeting with local community officials and protest leaders to help ensure preservation of life, property, and that all citizens’ enjoy the freedom to express their constitutional rights.

Now, protestors would have to find ways around violent confrontations with the police, reported the New York Times. Already, “rules of engagement” for dealing with the authorities have been discussed, and equipment — including bandages and nonbreakable goggles — distributed. Organizers have also established “safe spaces” for protesters to escape the cold, or tear gas.

The Missouri town was put in the international spotlight after Michael Brown, an unarmed 18-year-old black man, was shot by Wilson, a white man, while on the way to his grandmother's. The incident renewed discussion about racism in the U.S. justice system and the deep-seated racial struggles between law enforcement and the black community in Ferguson.

More than demanding justice for Brown's death, Ferguson's residents also say that they are fighting for an end to the discriminatory treatment of the black community at the hands of the police. The Ferguson police department's exaggerated response to the demonstrations — armed with military-grade equipment, which sparked a separate-but-related debate about the militarization of the police — further escalated the protests, and proved to the international community (because at that point the entire world had tuned in) that there was little accountability in the Ferguson police department.

The length of time it took for the grand jury to come to a decision was a bone of contention for many — the shooting took place three months ago, and the officer who shot Brown was identified not too long after the incident.

But that the case has garnered worldwide attention and raised questions about law enforcement tactics and police actions, argued Mark O' Mara at CNN, likely made the grand jury extra cautious about its decision. He also noted that the case's prosecutor, Robert McCulloch, has stated that he wants to present every shred of evidence and witness available to him.

However, as a prosecutor, McCullogh has been called out for his alleged close ties to the police and his past criminal cases that tend to favor law enforcement. It seemed the odds were stacked against justice for Brown and his family, but protestors in Ferguson have — so far — been unwilling to concede defeat.